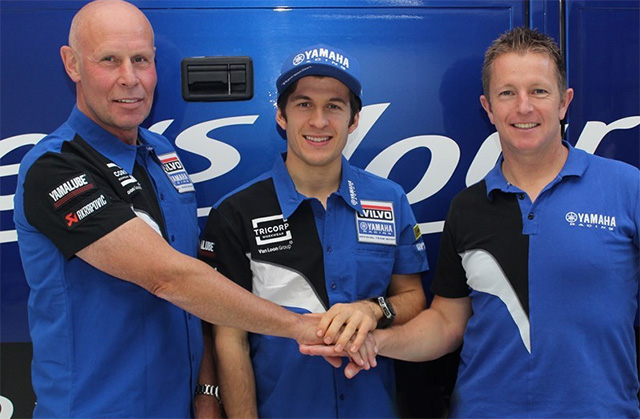 After four successful seasons in MX2 where he has led a total of 110 laps, won a total of fourteen races ‰ÛÒ a figure that includes Qualifying Race wins ‰ÛÒ which has resulted in five Grand Prix overall wins, and a whopping 26 podium finishes, Jeremy Seewer is one of the most exciting riders to make the jump into the premier class. The 23-year-old will be armed with the all-new 2018 Yamaha YZ450F, a bike that he already feels incredibly comfortable on.

Seewer entered his first full season in MX2 back in 2014 where he impressed right off the bat with 11 top-ten finishes for tenth overall in his rookie season. In the season that followed he leapt up into fifth place in the MX2 Championship Classification and took home three pieces of silverware for landing on the podium that many times.

Remarkably, there have been 72 rounds of racing over the last four MX2 seasons, which adds up to a total of 216 races with the Qualifying Races included. Seewer has a 100% attendance rate, proving that he is both fast and consistent; two essential elements in making a champion.

‰ÛÏI am happy that Yamaha had interest in me immediately because I feel like I have a bit of a connection with them through my support network and iXS, my gear brand. This made the decision to sign with Yamaha really easy," Seewer explained.

"I have been to the Wilvo Yamaha team‰Ûªs headquarters in The Netherlands and it looked really good to me. It seems they have big plans for the future. It‰Ûªs not like they only want to be involved for a few years, they‰Ûªve really invested and have a strong plan to be successful. They are so passionate about motocross and very professional and that‰Ûªs why it made an easy decision to choose this team," Seewer said.

The young and talented Swiss rider will join his compatriot Arnaud Tonus and one of the most experienced MXGP riders in the world, Shaun Simpson, in the Wilvo Yamaha Official MXGP team, where the trio have started their winter preparation in France.

"I‰Ûªve already been riding on Arnaud Tonus‰Ûª bike, which was a bit strange because I have been riding a different manufacturer my whole life," Seewer continued. "Changing to Yamaha I was really excited and interested to know how it will be. I was so surprised at how my first ride on the bike went. After a few laps, I felt at home already and that was without making any changes to the bike. I didn‰Ûªt even change the handlebars or anything, I just rode it how Arnaud rides it. It was quite funny; with no changes I could already throw some scrubs and stuff after only a few laps. I felt good immediately; it‰Ûªs a good bike. I will only need to make some changes to make it more comfortable for me and to suit my riding style, but I already know the base is really good," Seewer concluded.

Yamaha Motor Europe MX Racing Manager, Erik Eggens has confidece in the the manufacturers decision to gain the services of Seewer.

‰ÛÏThis is a very exciting signing for Yamaha and also for the team at Wilvo Yamaha Official MXGP," Eggens enthused. "Jeremy is one of the most talented and strongest riders to come out of MX2, which everyone knows as he was the vice world champion twice in a row over the last two years. He has been strong and consistent and I am confident that he is a rider who will achieve a lot in the MXGP class. Obviously the first year he will need to learn the bike, team and since it‰Ûªs his first season in MXGP, he will need to learn the new class too. We have already seen him out on the 450 at The Nations and a couple of other times, so I am confident he will do well.‰Û