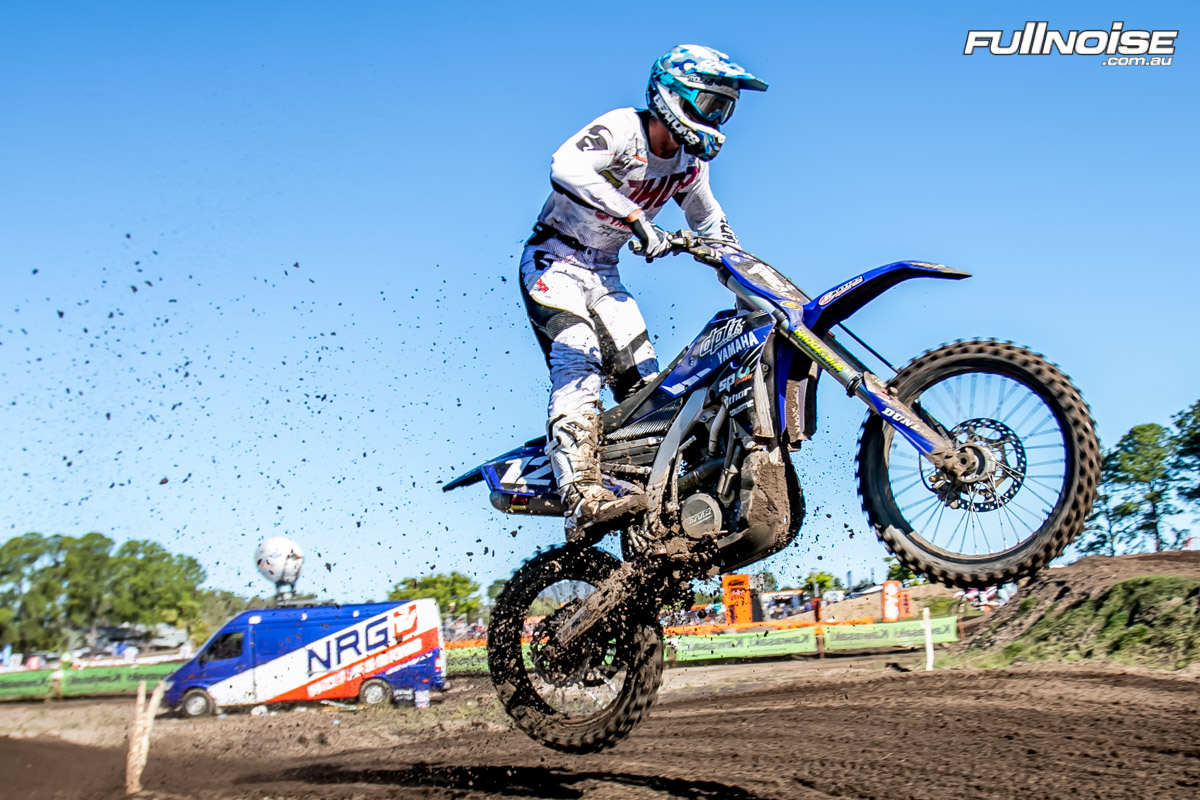 DPH Motorsport‰Ûªs Jed Beaton impressed thousands of spectators at Coolum, racing to a career first Motul MX2 Championship at Round 10 of the Motul MX Nationals on the Sunshine Coast.

The action on track did not disappoint today, with the Motul MX2 competitors taking part in two huge final races of the year before the 2016 champion was crowned.

With the Motul MX2 Championship still wide open heading in to this weekend‰Ûªs racing, when bikes headed to the line for moto one this morning, the tensions were high, and when gates dropped it was Davey Motorsport‰Ûªs Jayden Rykers who secured the first MXStore holeshot, but after only a few turns DPH Motorsport‰Ûªs Beaton had made his way in to the lead position.

With one lap in the books Beaton was out in front but only by the smallest margin. Hot on his tail was Serco Yamaha‰Ûªs Wilson Todd, followed by Rykers, and Beaton‰Ûªs closest competitor Caleb Ward. But it was Ward who was determined to get to the front, and by the time riders headed in to lap two, the KTM rider had made the pass on Rykers for third position where he began to eye off Todd‰Ûªs rear wheel.

With Beaton, Todd and Ward all going at it for the top spot, after four laps it was anyone‰Ûªs guess as to who would be able to persevere for the 30 minutes, and with a championship up for grabs, Beaton and Ward were determined to leave nothing on the track.

By the time riders reached lap seven, there had been little change to positions, with Beaton continuing to hold off Serco Yamaha‰Ûªs Todd, followed by Ward in third. Rykers looked comfortable in fourth place followed by privateer Geran Stapleton in fifth who only made his come back to racing after injury this weekend.

Unfortunately for Todd, his charge forward was cut short after going down on lap eight, allowing Ward to inherit second position, while Todd re-joined the race in fourth.

In the closing stages of moto one, Serco Yamaha‰Ûªs Wade Hunter suffered his second big crash in as many weeks, taking a huge tumble down the start straight, seeing him lose his impressive fifth place position and registering a DNF.

With only a single lap remaining, Ward made one final attempt at passing Beaton for the lead, but the KTM rider ran out of time, and when the chequered flag flew, Beaton crossed the line with the race one victory and the Motul MX2 Championship lead. Ward wrapped up race one in second position, followed by Rykers in third. Serco Yamaha‰Ûªs Todd held on to finish in fourth, followed by CRF Honda Racing‰Ûªs Kyle Webster in fifth.

Hamish Harwood, Stapleton, Dylan Wills, Dean Porter and Ricky Latimer all wrapped up race one inside the top ten. 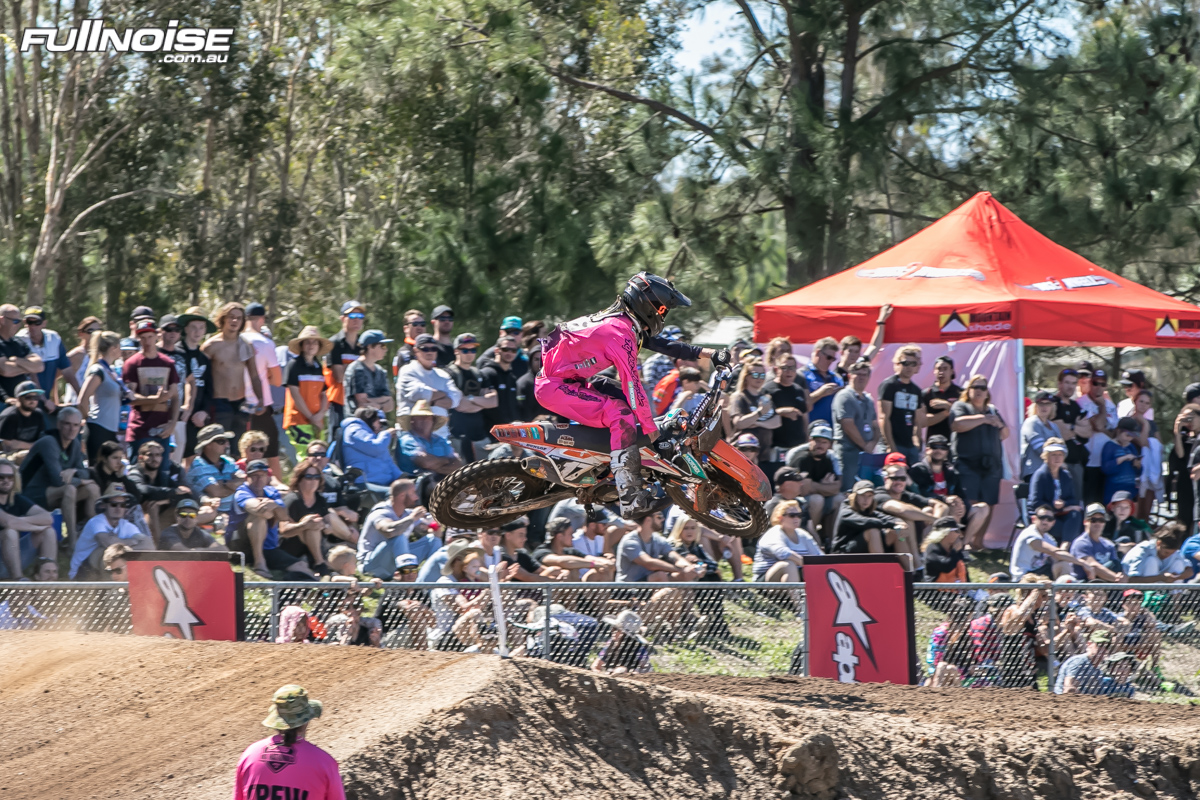 Caleb Ward rode his heart out on his way to finishing second on the day and for the season - Credit: Aaryn Minerds
With only one race left for the 2016 motocross season, the Motul MX2 class headed to the line after lunch to put on one final performance of the year, and when bikes launched off the line, KTM‰Ûªs Ward and Serco Yamaha‰Ûªs Todd were neck and neck as they exited the first turn, however it was Ward who took on the early race lead, leaving Todd and Beaton to fight for second position behind him.

But it was heading in to lap two that things got really exciting. Beaton made the pass on Todd for second position then broke away, and within only a few turns, Beaton had also made the pass on Ward for the race lead, proving that the DPH Motorsports rider was not prepared to play it safe in race two.

And Beaton‰Ûªs charge to the front paid off only one lap later, with Ward making a mistake and losing two positions, allowing the Yamaha rider some much needed breathing space out in front.

After four laps on track, the running order saw Beaton continue to maintain a healthy lead, followed by Todd in second and Ward in third. Rykers once again found himself in fourth position, ahead of Webster, Harwood and Wightman.

As the final race of the day reached its closing stages, there had been no change to the race order, placing DPH Motorsport‰Ûªs Beaton in the perfect position to wrap up the 2016 Motul MX2 Championship undefeated at Coolum.

And when the chequered flag flew for the final time today, it was Todd who collected the final race win at Coolum, followed by Beaton who finished in second, while Ward held off a hard charging Rykers to finish in third.

However, the fairy tale ending was taken by DPH Motorsport‰Ûªs Beaton, who‰Ûªs 1,2 results well and truly awarded him with not only the round win but the 2016 Motul MX2 Championship.

Second on the round podium was taken by Todd, while Ward wrapped up the final round of the championship at Coolum in third.

With Beaton taking the Motul MX2 title, second place in the championship was awarded to Ward, while despite not appearing at round ten, Husqvarna‰Ûªs Nathan Crawford wrapped up the year in an impressive third position on the podium.

‰ÛÏI so happy to get this title. I knew that I had put in the hard work during the off season, I kept getting better and better at every round, and then half way through the championship I improved my results a lot,‰Û 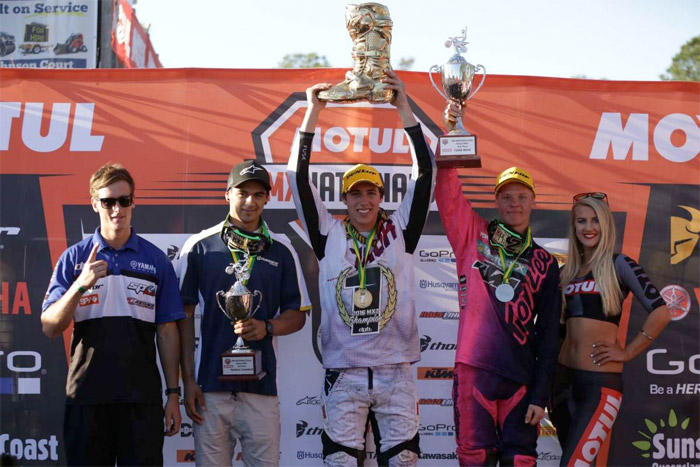 Top Image: Jed Beaton on his way to taking the round and more importantly the championship win at Coolum