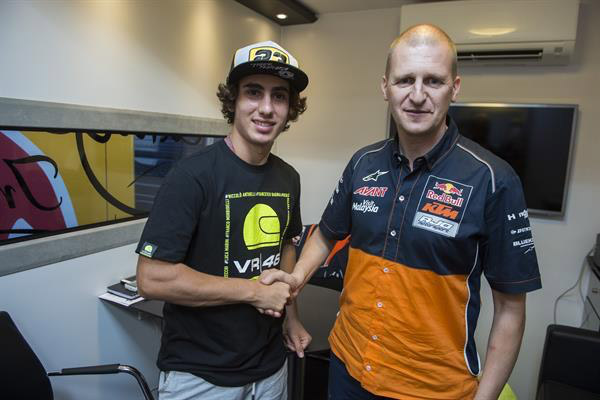 Red Bull KTM Ajo will compete in the 2017 Moto3 World Championship season with the pairing of riders Niccolo Antonelli and Bo Bendsneyder. Antonelli, aged 20, is a new arrival to the team and will partner Bendsneyder in the Finnish structure aiming to once again challenge for the title with KTM.

Born in Cattolica, Italy on February 23rd, 1996, Antonelli is one of the many World Championship riders to have participated in the Red Bull MotoGP Rookies Cup (2010). Two years later, the Italian entered the World Championship in the Moto3 class. 2017 will be his sixth season in Moto3, and he will be back onboard a KTM RC250 GP after last doing so in 2014. He has a total of three wins and two further podiums to his name at Grand Prix level.

Bendsneyder, who achieved his first podium at the British Grand Prix last weekend, has earned his place in the Red Bull KTM Ajo team for 2017 with a great rookie season, scoring points in seven of the 13 races contested so far in his rookie season.

Christian Korntner, KTM Project Leader Moto3: ‰ÛÏSo far the 2016 season has been very successful and we hope to crown it with the rider‰Ûªs title going to Brad Binder, and hopefully also with KTM taking the manufacturer‰Ûªs title. Now we‰Ûªre delighted to be on course with Red Bull KTM Ajo for another successful year in 2017. After his outstanding title win in the Red Bull MotoGP Rookies Cup 2015, Bo Bendsneyder has gone on to have a remarkable rookies season in Moto3. We‰Ûªre confident that he‰Ûªll continue this upward trend next season and be able to be more consistent. Niccolo Antonelli already knows the feeling of winning, and with the structure and team of Aki Ajo supporting him, he should advance to being an absolute winning rider next year.‰Û