Honda’s Marc Marquez in Search of Another Win at Silverstone 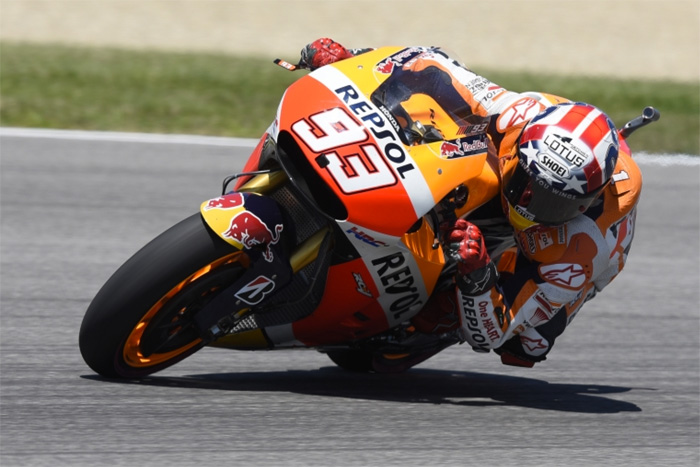 Repsol Honda MotoGP rider Marc Marquez has one target in mind for this weekend‰Ûªs British Grand Prix: a second successive Silverstone victory at the sweeping circuit, as he works to regain ground in his quest to claim a fourth World Championship title in a row; the last two in the premier MotoGP class.

With two wins and two second places in the last four races, the 22-year-old Spaniard has made valuable progress, after a challenging start to the season, when three race crashes gave his main rivals a head start in the points table.

A mid-season switch to a different chassis/suspension combination meant the former 125 and Moto2 champion regained the form that swept him to overall victory in 2013 and 2014. He has gone from fifth in the standings to third, and with the points margin cut back to 52 points, his chances of further progress are very real.

His self-avowed strategy is simple: to go all-out for victories. In this way, by adding more wins to the three already racked up this year, the mathematics are clear‰Û_ he has the chance of retaining his crown.

Marquez has three wins at Silverstone, one each in 125 and Moto2; and a fighting first last year, after finishing second in 2013.

‰ÛÏBrno was a difficult weekend but we took important points in the championship and keep fighting! Silverstone isn‰Ûªt one of my favourite tracks but I enjoy going there as you can feel the excitement and the history that surrounds the circuit and the area as a whole." Marquez commented.

"I‰Ûªve been on the podium there the past three years including a win last year, so let‰Ûªs hope the weather is good to us and we can fight for a similar result this year.‰Û