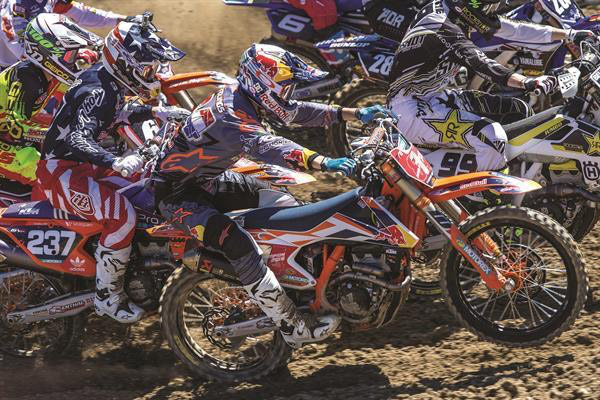 The Red Bull KTM Factory Racing Team on Sunday wrapped up the 2016 MXGP season on a high note with Jeffrey Herlings taking a 1-1 in MX2 to draw a line under a championship winning season and his career in the class.

The final round was at the challenging Glen Helen circuit in the USA. In the MXGP, factory teammate Tony Cairoli also finished i form with a 2-2 in the premiere class for overall second behind a strong ride by American Eli Tomac. Third place went to Tim Gajser, the 2016 MXGP champion.

Jeffrey Herlings leaves MX2 with three world titles and in excess of 60 GP wins and is already on his way to his career goal of more than 100 overall wins. At Glen Helen, with its speed and daunting hills, he answered the challenge from his MX2 rivals, and the participating top US riders.

The Dutch rider was 10.16 seconds ahead of the competition on his KTM 250 SX-F when he took the flag in the first race and 7.51 seconds ahead in the following moto for a clear overall victory. American racers Jeremy Martin and Mitchell Harrison took the minor podium places. Herlings had already wrapped up the title last week in Charlotte but the Glen Helen race secured second in the championship for Swiss rider Jeremy Seewer. Benoit Paturel of France was third.

‰ÛÏTo finish off the season with a win is pretty amazing." Herlings stated. "Now I start to ride theKTM 450 SX-F and we‰Ûªll work from there.

"I think we had a very successful career so far and now its time to step up to the big boys. There‰Ûªs not going to be much change. You stay with the same team and keep working with the same people.‰Û