Herlings and Prado Triumph at Trentino 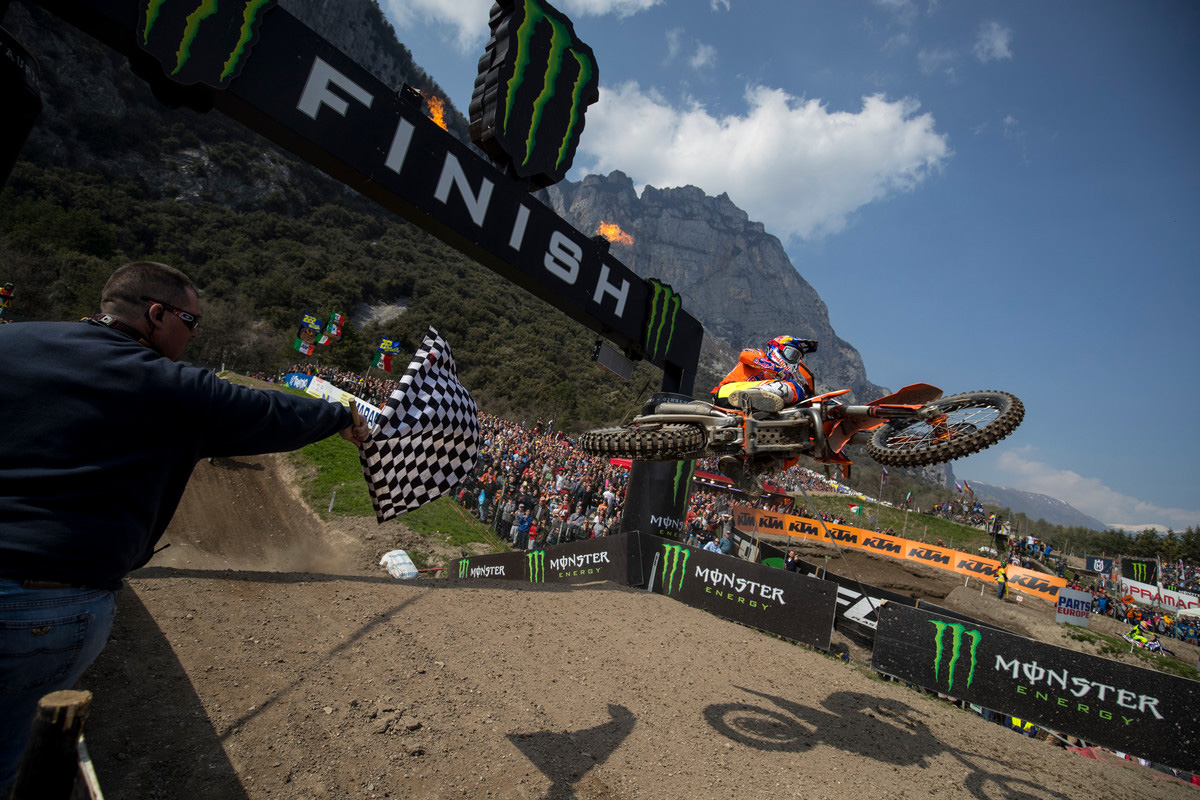 Jeffrey Herlings took his 70th win and moved into the championship lead with the MXGP class victory in Trentino. Photo: Ray Archer
Round four of the 2018 FIM Motocross World Championship saw Red Bull KTM maintain their unbeaten run in both MXGP and MX2 classes this year with Jeffrey Herlings and Jorge Prado emerging triumphant from the Grand Prix of Trentino in northern Italy.

Bright conditions and a bumpy and rutty hard-pack Pietramurata track was the setting for the Arco di Trento fixture and the first of three Grands Prix staged in Italy this season. Around the tight and narrow layout on the foot of the Dolomite mountain range the starting prowess of both man and machinery was key to success at this fourth event of twenty on the 2018 MXGP schedule.


Herlings has struggled off the start of nearly every race this season up until this weekend. A top priority of Herlings and his team was to improve his starting and it clearly worked when he took his first Fox Holeshot of the season, the second of his MXGP career in MXGP Race one.

By the end of lap one Desalle made his way forward past Febvre into 2nd but Cairoli dropped from 4th to 8th which he later stated was due to an issue with his front brake. Once back to normal Cairoli started to charge back to the front passing riders such as his teammate Glenn Coldenhoff and later Gajser among others. 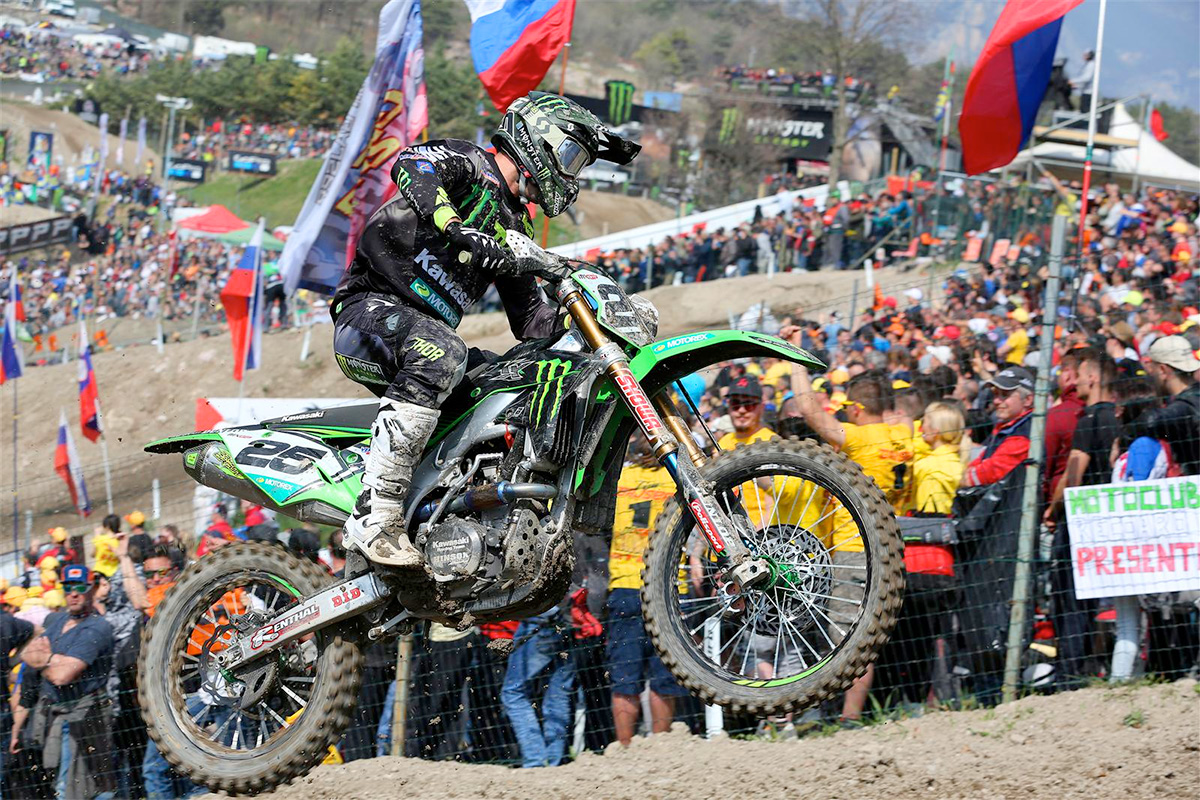 Clement Desalle of the Monster Energy Kawasaki Racing Team reinforced his challenge in the FIM World MXGP Motocross Championship with a stunning second place at the GP of Trentino in northern Italy.
While Cairoli tried to regain positions Desalle kept Herlings in sight the majority of race leaving Febvre in a race of his own. At the finish Herlings won by a little more than 5 seconds over Desalle who had Febvre another 7 seconds behind him. Cairoli took rebounded to finish the race right where he started, in 4th.

In race 2 Cairoli took his 6th FOX Holeshot of the 8 races this season but Herlings was right in tow along with Coldenhoff making it a perfect start for the Red Bull KTM Factory Racing team. Another good start was taken by Clement Desalle who led the newly signed Marchetti Racing Team KTM of Benoit Paturel and the Monster Energy Yamaha Factory of Jeremy Van Horebeek. For the first three laps Herlings chased Cairoli but on the uphill just after the finish Cairoli missed his breaking point and expected Herlings to go wide who instead dove to the instead and took the lead.

Following the pass Cairoli briefly lost touch with Herlings before reeling the #84 back in. Herlings consistently put in one fast lap after another to which Cairoli was unable to match. In the meantime Frenchman Gautier Paulin spent 17 laps looking for a way around Van Horebeek in 5th and with only 2 laps remain took the spot from the Belgian. 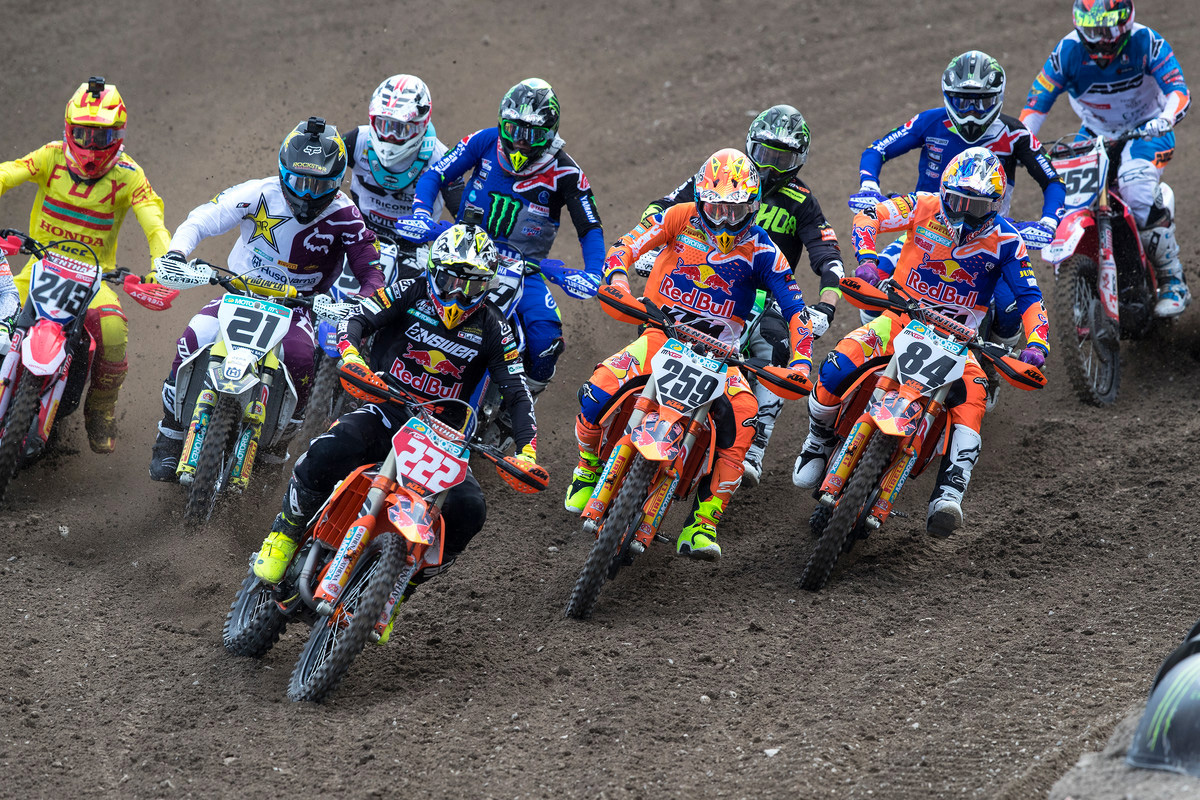 The KTM rider put themselves in winning positions right from the drop of the gate in Italy. Credit: Ray Archer
Herlings finished the race 20 seconds ahead of Cairoli to take the overall and reclaim the red plate, winning every race the weekend, and claiming his 70 GP Overall win.

‰ÛÏIt is amazing to win in this way and we have worked hard on our starts," Herlings said. "There was a big improvement for us this weekend and I hope we can keep it this way. This is not one of my favourite tracks even though I enjoy coming here. It was a great two days. It is pretty amazing to have won so many races and with just one brand. There is a lot of love with KTM and to do all of that together is pretty special. I‰Ûªm looking forward to Portugal.‰Û 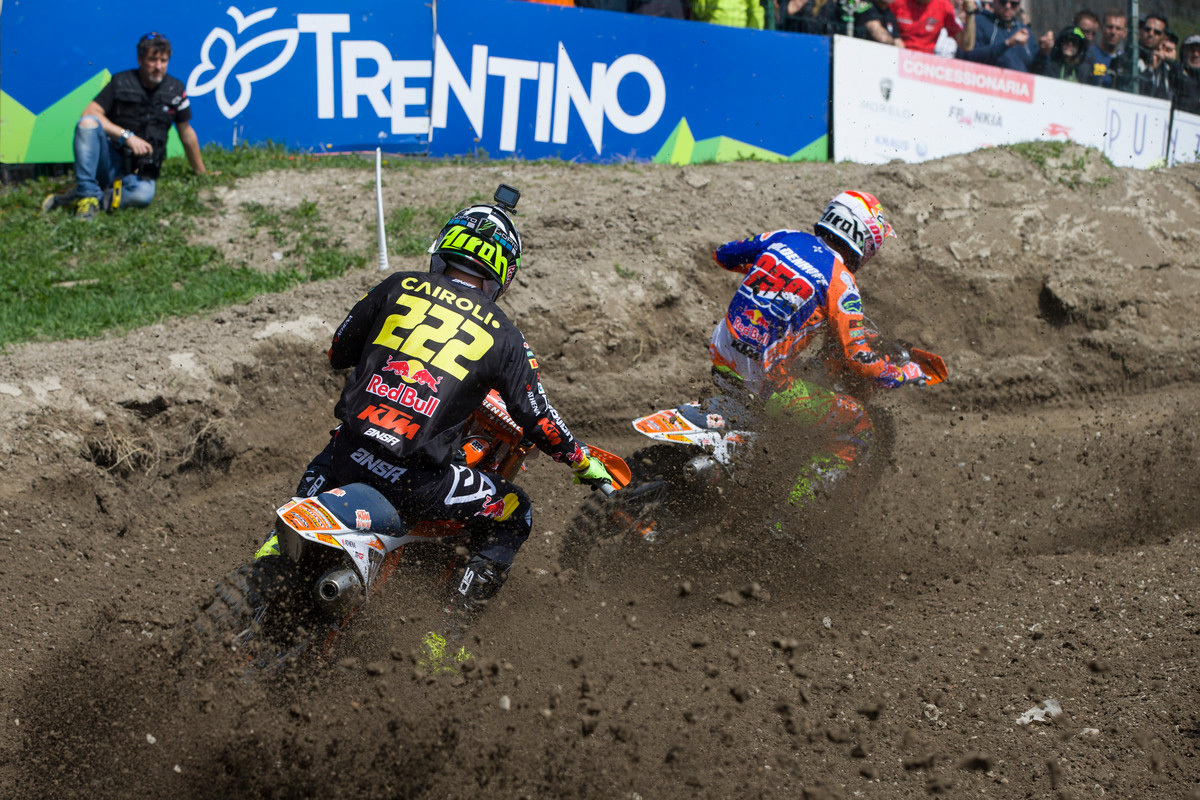 Antonio Cairoli finished home GP in third and dropped to second in the MXGP standings and has declared he will focus on being consistent to counteract Herlings speed. Photo: Ray Archer
Antonio Cairoli who finished the MXGP of Trentino in third.

‰ÛÏFor the championship it is good to always finish on the podium but I wanted a bit more today," Cairoli reflected. "Jeffrey was really fast in that second moto and it was difficult to beat him for speed and consistency. In the first moto something happened in the first corner and some stones hit my brake and the front [end] felt strange for the first few laps. It was very sketchy. I dropped to eleventh and then the wheel felt free again so I could push but then it was hard to pass on this track. We will try to be more consistent at the next GP," the Italian concluded. 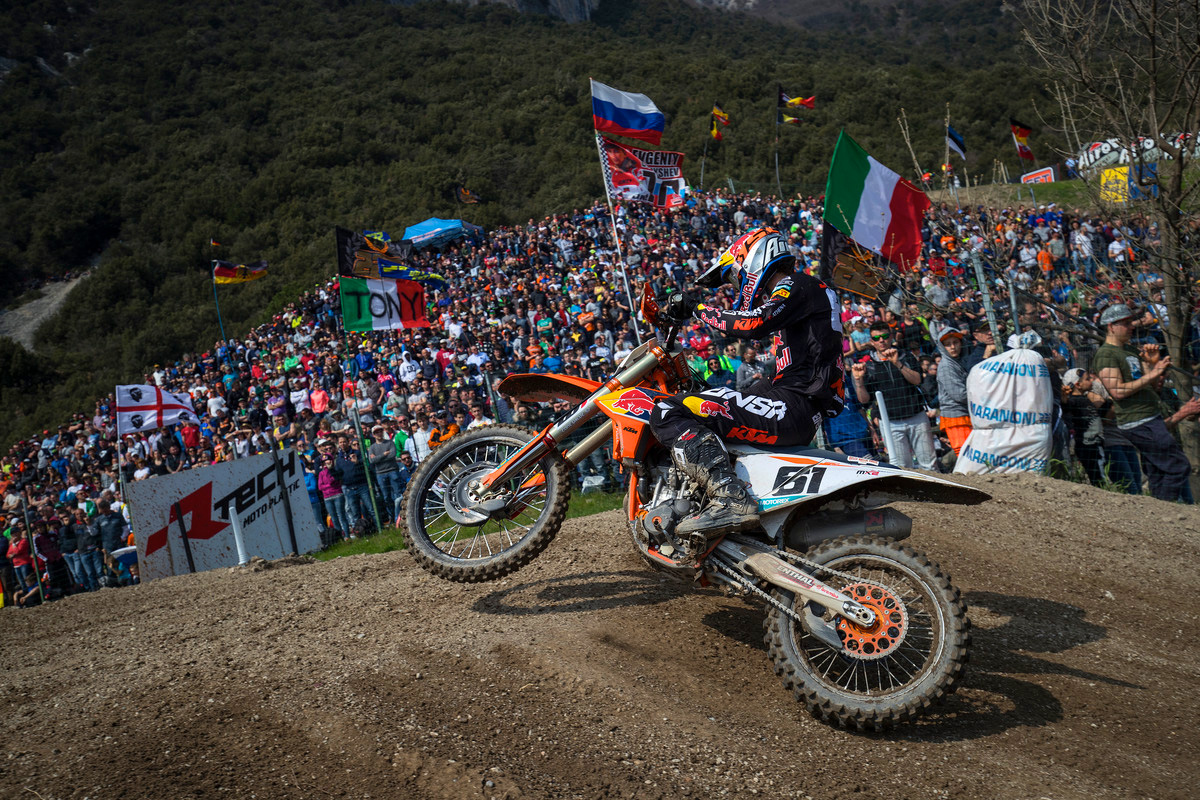 Spaniard Jorge Prado finally broke team-mate Pauls Jonass win streak to take the MX2 win in Italy. Photo: Ray Archer
Red Bull KTM Factory Racing has been unstoppable so far this year and while the first 6 successful races of the season were thanks to wins Pauls Jonass, his younger teammate Jorge Prado has been on the brink of taking a GP himself.

The Spaniard took both of the MX2 FOX Holeshots and in race one led every lap on his way to a dominant win. Prado closest competition in race one came from Henry Jacobi.

Jacobi battled to hold off Thomas Kjer Olsen. For the first 11 laps Jacobi was successful but Olsen finally found a way by the #29. Jonass was then the next rider to catch Jacobi but instead of being passed Jacobi dug deep and instead passed Olsen 3 laps before the finish. 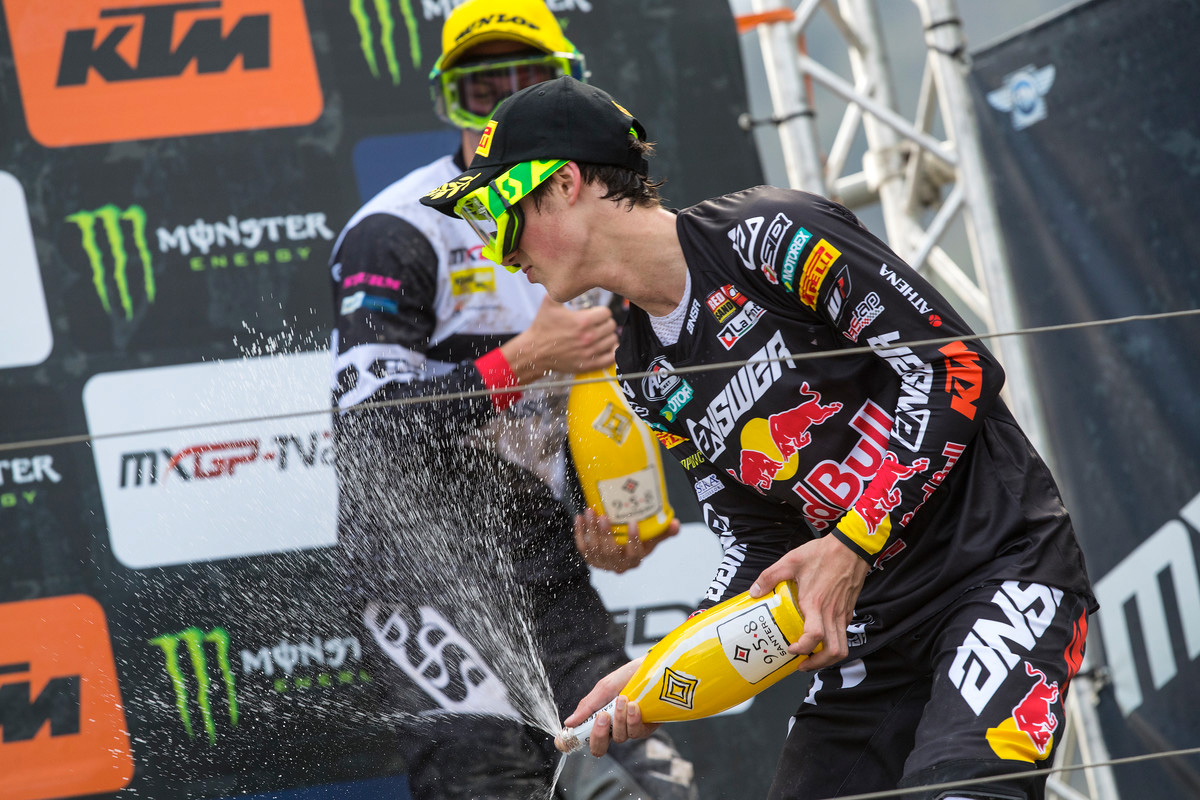 A win and a second place was enough to see Jorge Prado spray the champagne in Italy as the GP winner. Photo: Ray Archer
Prado crossed the line 7.6 seconds ahead of Jacobi with Olsen, Jonass, and Thomas Covington rounding out the top 5.

Race 2 was again led by Prado from the start but Covington followed closely. Team HRC‰Ûªs Calvin Vlaanderen redeemed himself after crashing out of race 1 on the start by running in third to start race 2.

Jacobi also started well and by the second lap was around Vlaanderen and into 3rd. Kemea Yamaha Official MX Team‰Ûªs Vsevolod Brylyakov had a break through performance in race 2 after starting in the top five and passing both Vlaanderen and Jacobi to take over third.

Vlaanderen returned the favor of being passed to Jacobi on lap 11. On the following lap Jonass and Jacobi came together sending both riders down. Both riders however were able to get up and finish the race.

At the front Covington pressured Prado one lap after another which was to no avail until the 19th and final lap where Covington took the lead and race win in a dramatic ending. Regardless of the 2nd in race 2 Prado took his second MXGP of Trentino overall victory in 2 years over Covington and Jacobi who took his first ever MX2 podium finish. 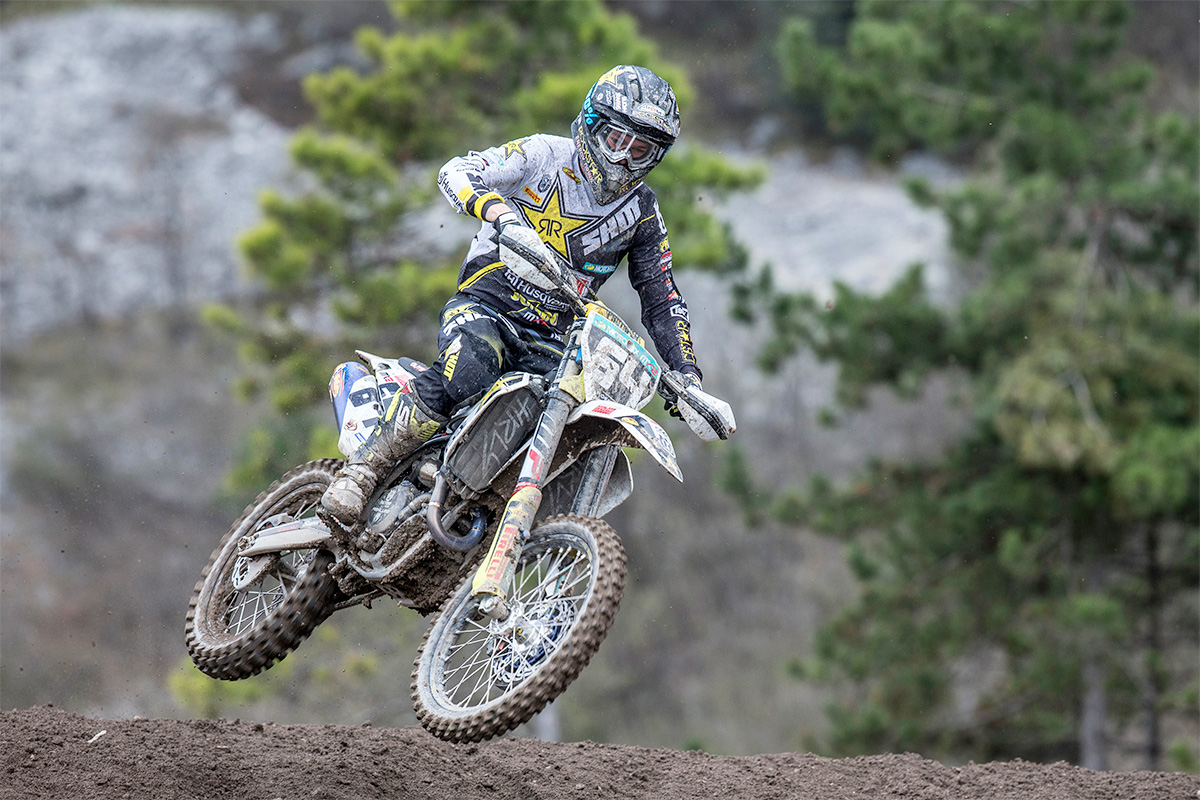 American Thomas Covington took his first moto win for the 2018 season and finished second overall.
Martin Racing‰Ûªs Michelle Cervellin returned to the MX2 class at home this weekend after missing rounds two and three with a knee injury. Cervellin lives less than an hour from the Pietramurata circuit and made his hometown fans proud taking 7th overall after his 6th and 11th race finishes.

‰ÛÏIt is great to win here again and to close up some points in the championship," Prado said. "I‰Ûªm pretty confident on this kind of dirt and these kinds of tracks. It was a very decent weekend. The goal was to get a good start and that meant first place and I did that on Saturday and the first moto, with a clear track you can ride a bit more relaxed. My lap-times were good every time I went out and I am getting more confident and stronger.‰Û 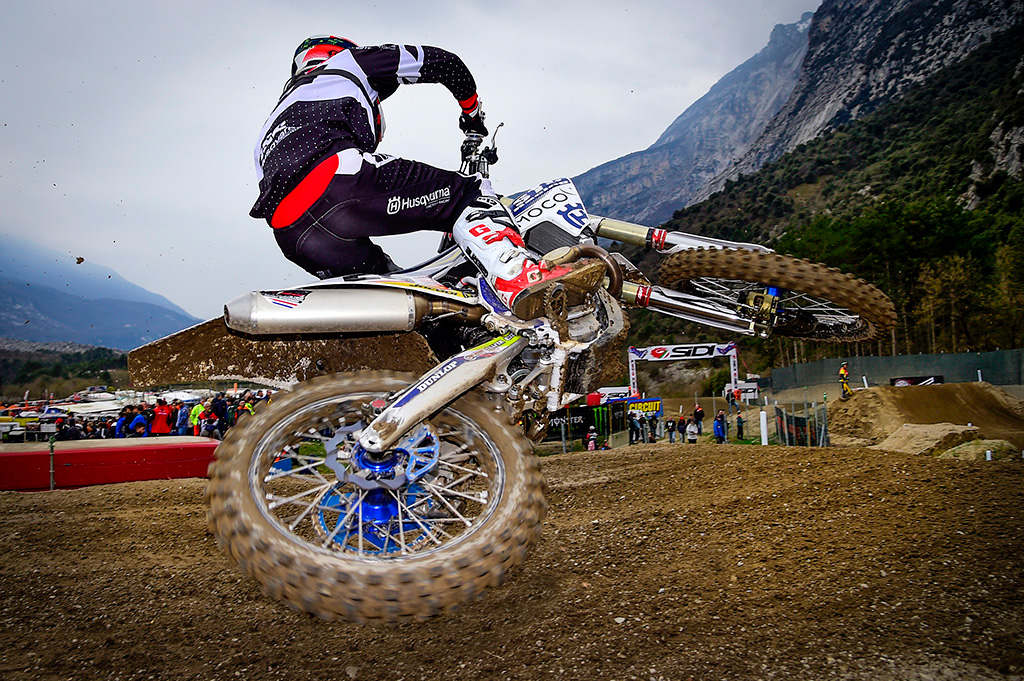 German Henry Jacobi had his best result for the year and landed on the podium with third in MX2. Photo: Youthstream
Herny Jacobi shared his thoughts on his first Podium: "I hope I can stick to this performance and continue to ride like that, I know I‰Ûªm fast, I just need to finish it. In Valkenswaard I crashed and at Redsand also but I think if I find some consistency I can get some more top fives or podiums."

World Champion Pauls Jonass who had claimed victory in all six motos in 2018 coming into the weekend was 5th at the end of the day. #1 rarely looked in confident form across the Pietramurata surface and was 4th in moto one and suffered a collision with Henry Jacobi in the second dash to finish 9th. The Latvian keeps hold of the red plate with a 28 point advantage over Prado.

"I would say the speed was there this weekend but I didn't get the best starts," Jonass said. "The track was really difficult for passing and I didn't find my flow. Fifth overall is still OK and some good points for the championship so we‰Ûªll look towards the next GP.‰Û