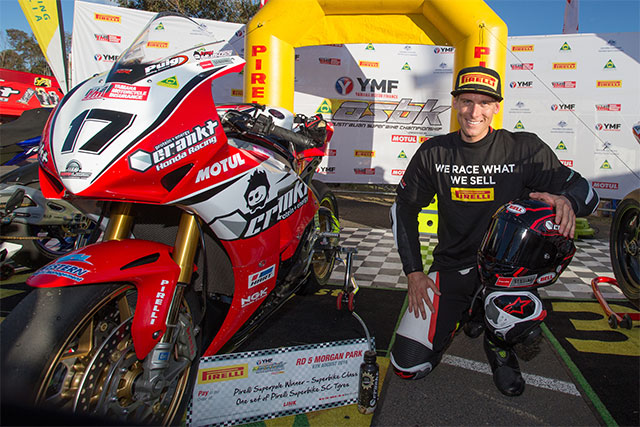 Round 5 of the 2016 Yamaha Motor Finance Australian Superbike Championship presented by Motul Pirelli continued at Morgan Park Raceway in Queensland today, with crowds pouring through the gates to watch the fastest riders in the country go all out in qualifying.

The Yamaha Motorcycle Insurance Superbikes and Motul Supersport riders had two qualifying sessions to determine their grid positions for when racing kicks off tomorrow, and it was Crankt Protein Honda Racing Team‰Ûªs Troy Herfoss and JNL Racing‰Ûªs Luke Mitchell who rose to the occasion, and collected the all-important Pirelli Superpole Awards.

With Crankt Protein Honda Racing Team‰Ûªs Herfoss and Yamaha Racing Team‰Ûªs Wayne Maxwell kick starting their Round 5 campaigns with flying lap times during practice yesterday, when the first qualifying session kicked off at Morgan Park this morning, spectators eagerly watched on as Australia‰Ûªs fastest men on two wheels went to battle once again.

From the minute bikes hit the track, Herfoss‰Ûªs top time from yesterday‰Ûªs practice was beaten by Jon Daniels Racing‰Ûªs Daniel Falzon, his Yamaha pulling a 1:14.498, but only a lap later, Maxwell retaliated with a 1:14.392.

However, with the Honda team opting to sit back and watch the beginning of the first qualifying session, when they eventually headed out, they were prepared for what needed to be achieved. And achieve is exactly what Herfoss did. After only a single lap on track, Herfoss launched to the top of the times, and by lap four had gone faster again with a flying 1:14.163 lap time, proving that he means business this weekend.

And with that time, Herfoss not only took out the first qualifying session, but became the new Morgan Park qualifying lap record holder. Maxwell wrapped up the session second fastest with his 1:14.392, followed by Falzon in third with a 1:14.498.

DesmoSport Ducati‰Ûªs Mike Jones was fourth fastest on track in Q1, setting a fast lap of 1:14.752, while Yamaha Racing Team‰Ûªs Cru Halliday was the only other rider to break in to the 1:14‰Ûªs, with a 1:14.782. Glenn Allerton and Jamie Stauffer wrapped up the session just outside the top five with the sixth and seventh fastest times respectively.

When the second qualifying session got underway for the Premier YMI Superbikes, the track had heated to 41.5 degrees, and many riders took their time putting down their fast laps.

Despite Yamaha‰Ûªs Halliday being the fastest rider on track in Q2, the session was relatively uneventful, with only two riders, Halliday and Crankt Protein Honda Racing Team‰Ûªs Jamie Stauffer bettering their times from this morning.

So when the session wrapped up, it was no surprise to see Herfoss, remain at the top and heading straight in to Pirelli Superpole, joined by Maxwell, Jones, Falzon, Halliday and Stauffer who were the top six riders after times from both sessions were combined.

When riders headed out for Pirelli Superpole the tensions were high, and after only a single lap on track Crankt Protein Honda Racing Team‰Ûªs Herfoss became the first rider to break in to the 1:13‰Ûªs with a 1:13.992.

With only ten minutes to put down their fastest times, the race was on for the five other riders to catch Herfoss. But on lap three Herfoss went better again, pushing down his lap time to a lightening fast 1:13.826, while Jones and Maxwell in second and third positions were still recording laps in the 1:14s.

And when Pirelli Superpole wrapped up at Morgan Park today, no other rider on track was able to record a time under 1:14, Herfoss taking his second Pirelli Superpole victory for the year and setting a new qualifying lap record, from Maxwell (1:14.157), followed by Jones (1:14.211) in third, while Halliday, Falzon and Stauffer finished in fourth, fifth and sixth places respectively.

An ecstatic Herfoss spoke directly after collecting his Pirelli Superpole award at Morgan Park this afternoon.

‰ÛÏI am feeling really good after Superpole. I felt like after Perth everyone has factored me out of the Championship a bit, so to come here and show we have the pace feels great,‰Û