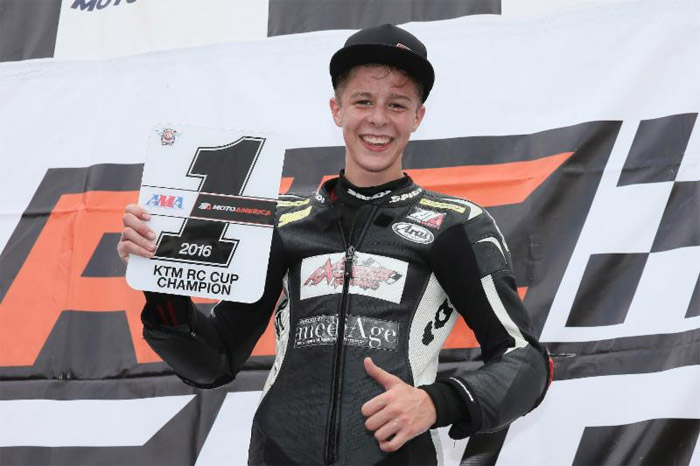 One of the three remaining titles up for grabs in the 2016 MotoAmerica AMA/FIM North American Road Race Series was clinched on a hot and balmy day at New Jersey Motorsports Park with Brandon Paasch taking the KTM RC Cup Championship in style by winning his sixth race of the season in the Yamaha Superbike Challenge of New Jersey.

With his win, Paasch now holds down an insurmountable 35-point lead over Anthony Mazziotto III, with his fellow New Jersey resident finishing seventh on Saturday.

Paasch and his AXcess Racing KTM beat the RC390 of Double B Racing's Jody Barry to the finish line by just .036 of a second. On Track Development's Benjamin Smith finished third for his first KTM RC Cup podium of his young career.

The other two titles will be decided on Sunday. JD Beach did all he could do on Saturday to close the gap to his title rival and Y.E.S. Graves Yamaha teammate Garrett Gerloff with the Kentucky resident taking victory to close the points gap down to nine points going into tomorrow's season finale. If the results are the same tomorrow, Gerloff will take the title by four points. For Beach to take the title he needs to win and hope Gerloff finishes third or worse.

For that to happen Beach needs help and that would most likely come from Valentin Debise, the Frenchman finishing third on his M4 SportbikeTrackGear.com Suzuki but some 13 seconds behind Gerloff. Fourth place today went to Wheels In Motion/Meen Motorsports' Joe Roberts, the young Californian some six seconds clear of HB Racing/Meen Motorsports' Richie Escalante, the Mexico City resident earning victory in the Superstock 600 class with his fifth-place overall.

"With the points gap to Garrett, I just have to do what I can and just try and do all the tricks in the book, but sometimes it just doesn't work," Beach said in explaining that he'd tried to slow the pace to allow Debise to catch up. "It's hard. Garrett has done a great job this year and really got a good gap on me in the beginning of the season.

"I've just been trying to work it back. I've got some friends out there so hopefully in the race tomorrow we can mix it up a little bit. But we're racing bikes and I can think of a lot worse things I could be doing. I'm having fun."

The final title that will be won on Sunday is the most prestigious: The 2016 MotoAmerica Superbike Championship. That will be decided in two races tomorrow and Monster Energy/Graves Yamaha's Josh Hayes will start the race from pole position after winning Superpole on Saturday afternoon. Hayes bested the field with his lap of 1:21.100, earning his second pole position of the season and the 40th of his stellar career.

"It's been a better start than I've had in a while, I feel like in quite a few race weekends," Hayes said. "But it hasn't been all smooth sailing and easy going. I have felt pretty inconsistent. We've been trying some things and learning still. But I've been able to get in there and make some good runs. I think all of us have been feeling the effects of the heat a little bit. Bit of a sour stomach and just not feeling great on the motorcycle.

"So you try to limit the damage and take care of yourself so you can have a good Sunday. The last couple weekends I've started off much slower I feel like than this. I've not started on the front row quite a few times and found myself leading races. So if that stays true then I feel like we've done some pretty good work - I should be competitive and good in the race."

As for battling his teammate Cameron Beaubier for the championship, Hayes knows it's going to be a difficult task. Beaubier goes into Sunday with a 29-point lead.

"It's been a good racetrack for me," Hayes said. "I came here to win two races and finish out the season strong. I'm Cam's (Beaubier) biggest fan. I believe in him a lot. I believe he's done all the hard work he needs to do this year and he deserves the championship and if I get it it's going to have to be some incredibly unfortunate luck.

"So I'm not going to think too much about that and just focus on going out there and finishing the season strong. After our announcement earlier (that Hayes will be back on the factory Yamaha team next year) I can come back and start 2017 in the right place and see if I can get that number-one plate back."

Hayes bested not Beaubier, but Broaster Chicken/Roadrace Factory's Jake Gagne, the Californian having his best qualifying effort of a troubled season to slot into second.

"We did get to do a day of testing after the last round at Laguna, so that was nice," Gagne said. "We got a couple new parts. Then we went into yesterday and ran all those parts and it wasn't actually too comfortable so we kind of took some stuff off and kind of went back to what we had, which has kind of been the story the whole year. We get stuff and it doesn't always work out the way you want it to. So we kind of went back to what we know. Today I got a little more comfortable and then after the practice this morning made quite a bit of changes to the front end, just trying to get a comfortable front end underneath us.

"The guys have been working hard. Like I said and saying over and over again, it just feels good to get it up here for those guys and for the team. I think starting the race from the front row is going to make it exciting. I'm definitely going to be wanting to go for it and try to run with these boys. They're hauling butt. Like I said, we'll just try to get off to a good start. We only have two more (races) this year, so we got to try to go out with a bang."

Beaubier will start the two races on the outside of row one after qualifying third - despite a crash in Superpole.

"Superpole obviously didn't go the way I wanted it to," Beaubier said. "The beginning I felt really good on the race tire. I strung a few laps at the beginning and felt pretty comfortable doing it on the race tire. And then I went out of pit lane and I saw (Josh) Herrin there like he always is trying to get a tow. I just went super slow on the first lap, went for my flyer lap, messed up the first section a little bit and I just pulled it and went slow again just to conserve the rear tire and get ready for the next lap.

"I think I just didn't have enough heat in the left side of the tire because I had two or three pretty slow laps before my actual flyer. That's a bummer, throwing the bike down the road from my guys just because I know how hard they work. The last thing they want to do is piece together a bike in 100-degree weather. So sorry to them, but I'll try to make it up to them tomorrow."

So tonight Paasch is the only rider in the paddock who will sleep well after wrapping up his title a race early.

"Most of the race I hung back there in fourth, fifth," he said. "With three or four laps to go I started moving to the front. I led on to the straight coming into the last lap and a couple of people drafted by me and I worked from there through the last lap. I made a pass in the last corner and was able to hold him off to the line."