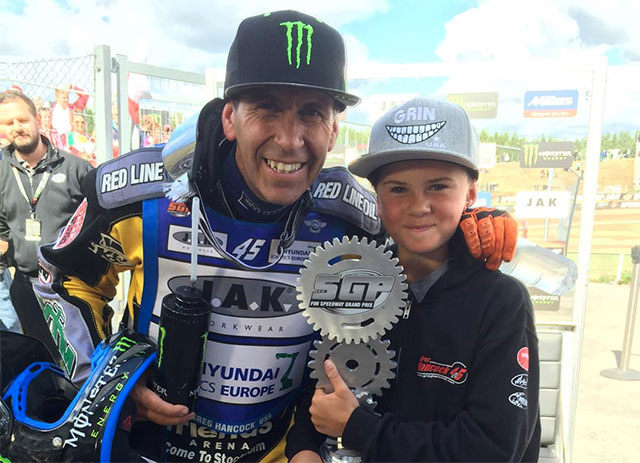 Triple world champion Greg Hancock ended his 21-year wait for an FIM Speedway Grand Prix win in Sweden, and dedicated it to his extended band of family, friends and fans in his adopted homeland.

It was an emotional triumph for American Hancock, who bases himself in Sweden during the European season. The nation has become a second home for the 46-year-old, who is married to Swedish wife Jennie. The couple have three half-Swedish sons in Wilbur, Bill and Karl.

Eldest son Wilbur was in the Malilla pits to give Dad a huge hug after he ended his long wait for a Swedish win.

Hancock has appeared in all of the SGP rounds staged in Sweden since 1995, and was elated to triumph there at the 36th time of asking.

"That had been a long time coming," Hancock said. "Every year I come here, I want to win and I‰Ûªve never managed to have a great meeting in this place. But today I did and it makes it all worth the wait.

‰ÛÏEveryone knows I have a big tie to this country. Having a Swedish wife and our kids is one thing. But there are a lot of sponsors and mechanics who have worked for me here.

‰ÛÏThere are so many people who have helped me here. They make me feel right at home, even when we‰Ûªre just here for the season. This goes out to them. I really, really owe it to them. They have always been there and always supported me. I just want to say ‰Û÷thank you ‰ÛÒ there‰Ûªs more to come.‰Ûª‰Û