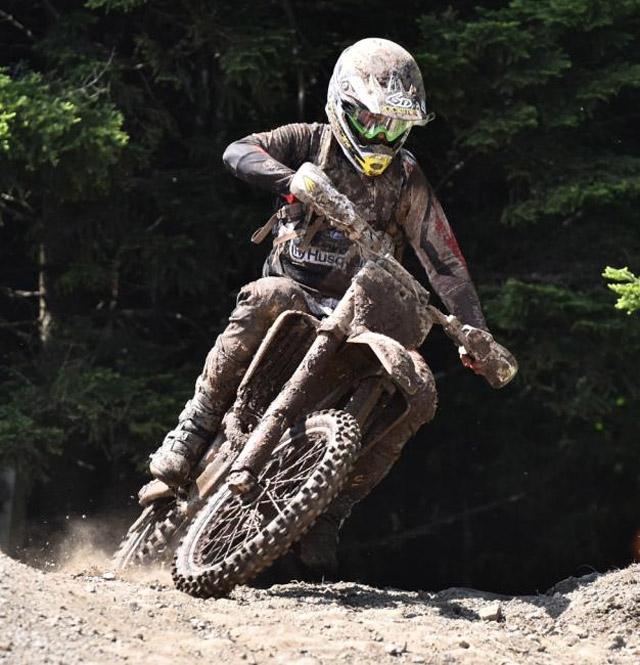 The 2016 AMSOIL Grand National Cross Country (GNCC) Series presented by Maxxis, an AMA National Championship, picks back up this weekend, September 10 and 11, after a three-month break over the summer. Unadilla MX will host the world's fastest off-road racers this weekend for the 12th Annual Parts Unlimited Unadilla GNCC held at the iconic Unadilla MX in New Berlin, New York.

With a 15-point lead over his closest competition, FMF/KTM Factory Racing's Kailub Russell heads into this Sunday with hopes of earning his sixth overall win of the season.

Russell, a three-time National Champion, has shown no signs of slowing down this season where he has only finished off the podium once thus far. With a total of six overall wins, the only thing that hinders Russell is his eleventh place finish just two rounds ago in Odessa, New York. Russell heads into this Sunday with hopes that the second New York round will treat him better, and looks to use his most recent GNCC win as momentum to add another victory to his resume.

Russell's biggest competition, Rockstar Energy Husqvarna Factory Racing/Bel-Ray's Josh Strang took the overall win at Unadilla one year ago and will look to repeat his success this Sunday. After a disappointing seventh place finish at the Snowshoe GNCC, Strang has been busy training throughout the summer break, much like Russell and the rest of the field. This Sunday will be the ultimate showcase between Russell and Strang.

Westfield Powersports KTM Presented by Moose Racing's Jordan Ashburn is long due for an overall win. After struggling to adjust to his new ride, the Tennessee native has put in consistent results at the past few races. Another rider who is still looking to earn his first win of the season is Rocky Mountain ATV*MC/KR4 Arrive-N-Ride Team's Thad Duvall. Duvall walked away with a podium finish in 2015 and will attempt to break what seems to be a bad luck streak this Sunday.

After missing three rounds due to a back injury, JCR Honda/Lucas Oil/Maxxis/FLY Racing's Chris Bach will once again be lining up on the first row this weekend. Since being released to ride Bach has spent his days training at his teammate, Trevor Bollinger's track. Perhaps the extra motocross practice will be beneficial to Bach's performance this weekend where he will be on track for redemption and the overall win.

Another rider fresh off recovering from an injury is Coastal Racing/Rockstar/Husqvarna's Ryan Sipes. Although Sipes raced the Snowshoe GNCC his tenth place finish was far off from his normal results. With a full three-months of training and a notable 14th overall just two weeks ago at the Ironman Pro Motocross National, Sipes will be a man-on-a-mission as he continues his quest for an overall win. Sipes' former professional motocross career may play to his advantage where both Unadilla MX tracks will be incorporated into the 10-mile GNCC course.

N-Fab/AmPro Yamaha's Grant Baylor heads into New York with a second and third place overall finish on this season's resume. The only thing Grant Baylor is missing is an overall win, and while he contends for the win he will ultimately be a rider to keep an eye on whether it be for the win or a podium finish. Both SRT/KTM/Kenda Tires' Steward Baylor Jr. and MCS Racing Suzuki/Obermeyer/Kenda/MX Tech/Fly Racing's Ricky Russell will be charging hard in an attempt to earn their first overall podium finish of the season.

JCR Honda/Lucas Oil/Maxxis/FLY Racing's Trevor Bollinger leads the XC2 Pro Lites, but more notably sits third overall in the National Championship chase. As the season approaches its conclusion, Coastal Racing/Husqvarna/MSR's Craig Delong follows in second, with Solid Performance KTM's Jesse Groemm rounding out the top three. Since switching to his new team, Groemm has not placed outside the top five and will be a top contender along with Delong as they look to end Bollinger's success.

The premier WXC class will take to the New York woods during the 10 a.m. amateur race. With the top three ladies being separated by only 20 points, the championship still remains undecided and is anyone's to claim. However, FLY Racing/Maxxis/Seat Concepts/Yamaha's Becca Sheets has yet to finish worse than fourth this season, and is showing the signs of a potential champion. Sheets was the runner-up in both 2014 and 2015, but has proven that she is the one to beat through her performances at the first 10 rounds.

Bonzi/RideMPS.com/Yamaha-backed Brooke Cosner remains within striking distance of Sheets where she sits in second by only eight points, and FMF/KTM Factory Racing's Kacy Martinez, the two-time WXC GNCC Champion, rounds out the top three in the series standings heading into the Unadilla GNCC.

Top Image: Aussie Josh Strang is hoping to earn an overall win and some valuable points in the championship standings this weekend.