GIXXER and Red Bull Rookies Cup On Track At Chennai 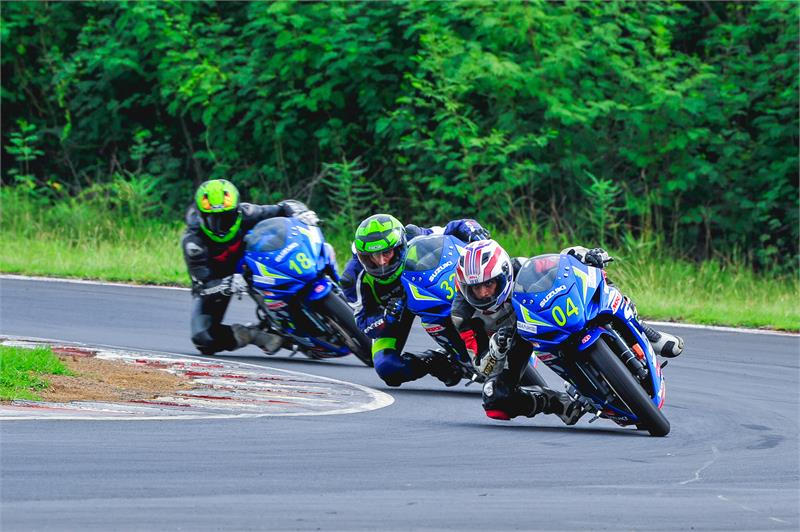 The third round of Suzuki‰Ûªs popular one-make Gixxer Cup hosted the final round of the Red Bull Road to Rookies Cup at Chennai in India at the weekend and saw exciting racing throughout all classes.

Following the opening round in June, Open, Novice and Rookie class riders have become more accustomed to their new 2016 Gixxer SF 155cc race machines and showed improved performances at the second event to be staged at the Madras Motor Race Track.

The Open Category saw two closely-fought races with Meka Vidhuraj in top form to take the top podium position twice, although it wasn‰Ûªt an easy fight for him each time, with three strong contenders for the podium. In Race 1, he won against Rajinikanth and Prabhu with less than a second gap. In Race 2, it was even closer was he crossed the line just 0.015s ahead of Vivian Gladwin and Rajinikanth; all three riders within 0.1s of each other.

The Novice Category had a busy three races over the weekend, with Joseph Mathew winning all three; the rest of the podium positions were taken by four contenders - Antony Peter, Amarnath Rajan, Clinton Cordeiro and Alan Fernando. The Red Bull Road to Rookies Cup saw two of the three races won by Sri Lanka‰Ûªs Aaron Gunawerdena with Sachin Choudhary second in two races before winning the final event. Third position was taken by AS Alexander on two occasions, while S Varoon fought competitively throughout all three events, which added to the excitement.

The round culminated in a thrilling yet tough decision for the team at Suzuki Motorcycle and Red Bull India to choose one lucky rider who gets to represent India at the Rookies Cup Qualifying in Spain later this year. After careful observation and analysis of the riders‰Ûª performance, mature attitude and improvement graph over the last two rounds and two training sessions, the unanimous decision was in favour of Sachin Choudhary.

The next round of the Suzuki Gixxer Cup moves to the north of India on September 29th to October 2nd at the famous Buddh International Circuit, Greater Noida. This time, the Indian National Motorcycle Racing Championship is joined by the Asian Road Racing Championship and their entire grid line-up.