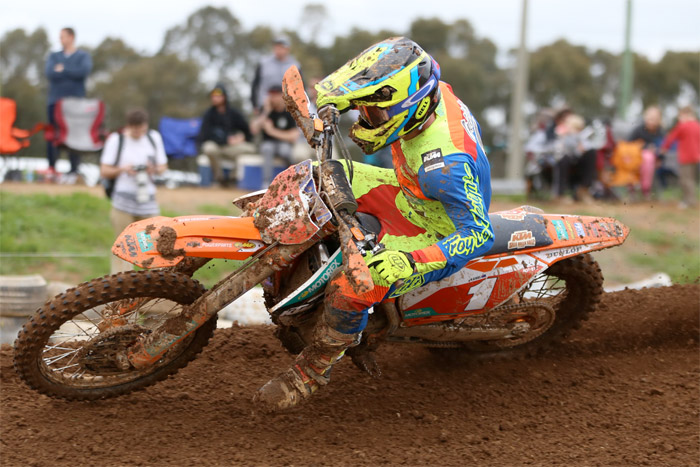 KTM Motocross Racing Team rider Kirk Gibbs added another victory to his MX Nationals title defence when he won the eighth round of Australia's premier motocross championship at Shepparton in Victoria.

The reigning number one plate holder kicked off the day with the fastest qualifying time, then a victory in Superpole, before going on to take third in the opening moto after an average start.

‰ÛÏThe day was pretty good." Gibbs reflected. "I qualified fastest and got Superpole, which is an area I've been lacking in the last few rounds.

"First race I had a really bad start but I pushed hard in the first two laps and got into third. Dean and Todd had a couple of seconds on me and I was fighting hard to stay with them but I got a bit of arm pump. From there, you've just got to ride within yourself without crashing. Dean went down and I was in second, but in the last two laps he found some good lines and ended up passing me.

"In the second I holeshot and lead for the majority of the race, but Dean passed me and he had a really good pace going as well. I just tried to stay with him and he only had a very small buffer in the last laps, but he threw it away with four turns to go and he handed me the win. I don‰Ûªt like to win that way but I‰Ûªll take it. I rode a lot better in that second moto and it‰Ûªs good to make some points up!‰Û 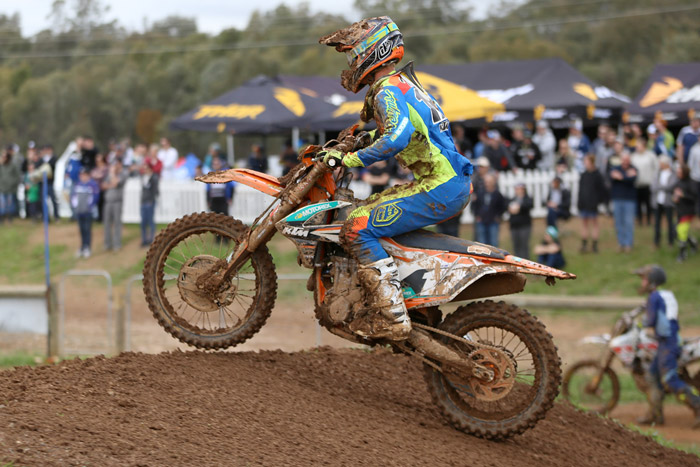 Ward suffered another poor start in the first Moto but powered his KTM 250 SX-F through to fifth place, before a better start in the final Moto allowed the likeable north Queenslander to demonstrate his incredible speed with a craftsman-like victory.

‰ÛÏThe first Moto was not very good at all, I got a horrible start and I spun on the concrete then got pinched out of the gate, I made my way through the pack ‰ÛÒ it was just chaos out there with people getting loose and crashing ‰ÛÒ I managed to come through to fifth, but it was really disappointing after my starts at Conondale." Ward said.

"Second Moto I spun again but I got a bit lucky in the first corner around sixth. From there I pretty-much had the mindset that I was going to win the race. I wanted it bad. I got onto the back of Nathan and Jed and managed to make the passes. The track was really technical and it was a case of just trying to maintain the lead.

"I‰Ûªm 15 points off the championship lead and anything can happen from here. I've got four motos left so I will just give it my all. I‰Ûªve got nothing to lose.‰Û