France ready to welcome 92nd edition of the ISDE 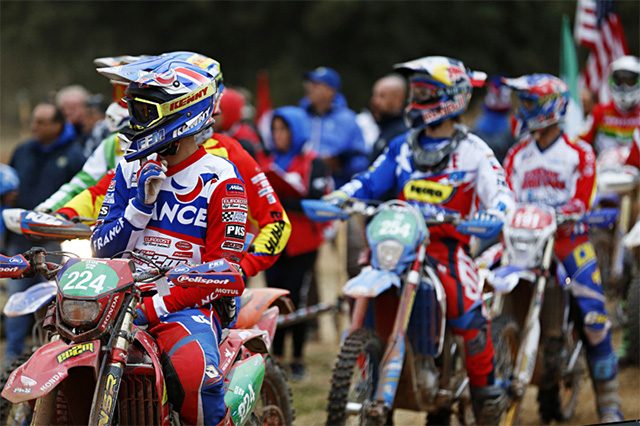 The ninety-second edition of the FIM International Six Days Enduro (ISDE) is set to take place in Brive-la-Gaillarde, France from 28 August to 2 September as the event returns to France soil for the first time since 2001.

With much having changed in the World of enduro during the two most recent instalments of the ISDE in France, the popularity of the ISDE remains stronger than ever with more than eight hundred riders taking to the start of this year‰Ûªs event. With nineteen FIM World Trophy teams entered, sixteen FIM Junior World Trophy teams and nine FIM Women‰Ûªs World trophy teams, in addition more than five hundred riders have signed up to compete in the Club team competition, with no fewer than one hundred and sixty-six representing home nation France.

Out to claim a third successive World Trophy team victory on home soil having won in Mend in 1988 and Brive in 2001, France will be focused on nothing but victory. Despite the fact that it‰Ûªs now three years since they last topped the FIM World Trophy team results, since 2008 France have claimed no fewer than six victories with this year‰Ûªs squad of Christophe Nambotin ‰ÛÒ KTM, Loic Larrieu ‰ÛÒ Yamaha, Jeremy Tarroux ‰ÛÒ Sherco and Christophe Charlier ‰ÛÒ Husqvarna looking to add to that tally.

Despite making last minute changes to their team, Sweden enter this year‰Ûªs ISDE with high hopes of a repeat Junior World Trophy victory. With just forty-five seconds separating Sweden from runners-up the USA last year in Spain, Albin Elowson ‰ÛÒ Husqvarna, Mikael Persson ‰ÛÒ Yamaha and newcomer Joakim Grelsson ‰ÛÒ KTM will be hoping that once again they can do just enough to secure class victory.

Returning to the event with an unchanged Women‰Ûªs World Trophy team, Australia‰Ûªs winning trio of Tayla Jones ‰ÛÒ Husqvarna, Jessica Gardiner ‰ÛÒ Yamaha and Jemma Wilson ‰ÛÒ Yamaha start this year‰Ûªs event as clear favourites for victory. Dominating in recent years and having competed together as a team at four previous ISDE competitions, Australia‰Ûªs Women‰Ûªs squad is filled with experience, youthfulness and determination and will go up against eight other teams in the Women‰Ûªs competition.

The 2017 ISDE takes place in Brive, France from 28 August to 2 September