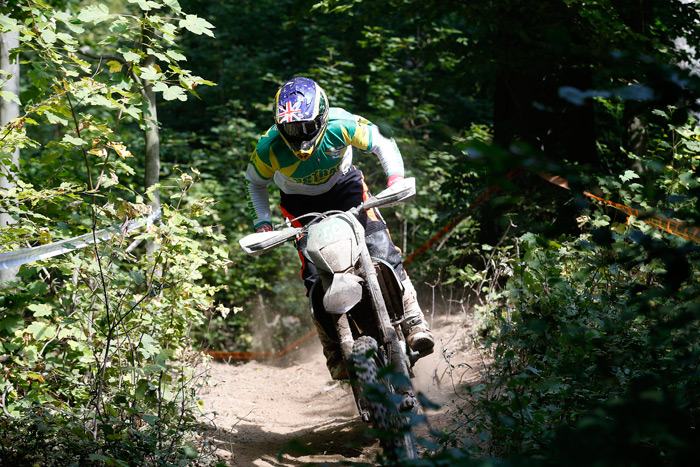 Following today‰Ûªs earlier decision by the FIM‰Ûªs International Disciplinary Court, which saw the provisional reinstatement of the eight competitors who were originally disqualified on day three of the 2015 FIM International Six Days Enduro (ISDE), France have moved into the lead of the World Trophy team competition at the end of day five of the ISDE.

With conditions wet and slippery in and around Kosice following overnight rain, France delivered an impressive team performance and now hold an important two minute and four second lead over Australia.

Unable to match the pace set by their French rivals Australia now drop back to second, but with everything still to play for. The battle for victory in the ninetieth edition of the ISDE will go right down to the wire.

Behind the two leading nations the fight for third overall also remains close with just one day left to settle the scores. Spain, who sit third, have a two-minute advantage over Italy, but still need to give maximum effort on the final day if they wish to repeat their podium result from 2014. With Italy fourth, Great Britain complete the top five.


Credit: Jake Miller
Australia are now just one day away from securing victory in the FIM Junior World Trophy team competition. In what has been an outstanding performance, Broc Grabham - Sherco, Tom Mason - KTM, Daniel Sanders - KTM and Tye Simmonds - KTM enter the final day of racing with a comfortable thirteen minute and forty-two second lead.

Remaining stationed in second, Sweden look set end their week as runners up to Australia. While the first two positions look all but confirmed, the fight for the final step of the podium is still alive. With a one minute and twenty-nine second advantage over France, third placed Italy cannot afford to relax on day six.

At the end of five testing days of racing in Slovakia, Australia are all but assured victory in the FIM Women‰Ûªs World Trophy team competition. With only the final day six motocross races remaining the trio of Jessica Gardiner - Sherco, Tayla Jones - Yamaha and Jemma Wilson - Yamaha lead France by over fifty minutes with Sweden a further twenty-one minutes behind in third.

In the Enduro 1 class, the win on the penultimate day went to Finland‰Ûªs Eero Remes - TM. Placing just five seconds adrift, Great Britain‰Ûªs Jamie McCanney - Husqvarna maintains his lead in the category. France‰Ûªs Antony Boissiere - Sherco sits second, but with only seven seconds separating himself and Spain‰Ûªs Cristobal Guerrero - Yamaha in third, nothing is yet decided.

Australia's Josh Green slipped down to 5th in the E3 classes after finishing the day in 10th
Credit: Jake Miller
Claiming his first day win of the week, France‰Ûªs Loic Larrieu - Sherco secured a dramatic victory over Australia‰Ûªs Daniel Milner - Yamaha by two seconds in Enduro 2. Ending his day in third, USA‰Ûªs Ryan Sipes - Husqvarna starts the final motocross as favourite for the overall class win from Milner and Larrieu.

Matthew Phillips moved back one position in the E2 class overnight down to 5th position, while Beau Ralston moved ahead of Tye Simmonds as both riders moved down the order and now sit in 9th and 10th positions. Glenn Kearney holds down 21st and Broc Grabham 34th.

Lachlan Stanford continues to hold down 6th in the E3 class with Tom Mason in 20th.

With just one short liaison section to ride ahead of the final day‰Ûªs motocross races, the end of the Slovakian ISDE is now all but insight for the four hundred plus weary competitors still left in the event.