Finale Round Of The European FMX Championships Heads To Mannheim 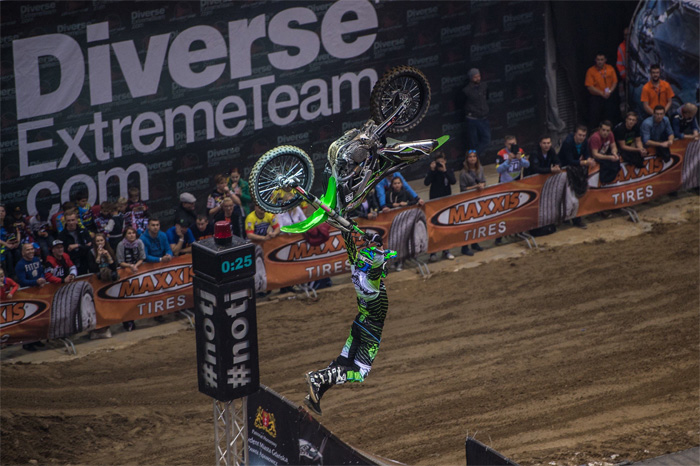 On May 21st, 2016 the NIGHT of the JUMPs will return for an impressive 7th time in Mannheim.

For one day only, the biggest Freestyle Motocross series in the world will bring together the best riders competing for the final points and championship in the Mannheim SAP Arena. The audience will be treated to the largest course ever built inside the SAP Arena with two Quarter Pipes to enable the riders to perform either the 540 Flair or the Transfer Egg Roll.

10 of the world‰Ûªs best FMX riders from six nations will compete for the final points in the FIM European Freestyle Motocross Championships to determine the new 2016 FIM European FMX Champion.

The riders with the best chance of claiming the title are Maikel Melero (ESP) and Remi Bizouard (FRA). Currently the Frenchman is a close six points behind the Spaniard. Considering Melero has won 10 of the last 11 NIGHT of the JUMPs contests, it should be a clear result. However, the little Spaniard stumbled at the last European Championship round in Munich and fell on the Egg Roll and ended in sixth place. Should Melero repeat a problem in Mannheim and Bizouard wins, then the three-time World Champion would intercept the Spaniard for the Championship. And as a former European Champion, Remi will be wanting to reclaim the title.

Also looking to score valuable points will be the 18 year old German, Luc Ackermann who was the runner up to the European Championships last year. Coming with his 540 Flair, California Roll, Open Loop flip and Surfer Take Off Tsunami Flip, he will want to jump back on the podium. Currently he is in fourth position, tied with the Australian Rob Adelberg, who will not be in Mannheim. So he should clear Adelberg‰Ûªs position, however he will have to look more closely at the Czech rider and reigning European Champion, Petr Pilat, who is only 6 points behind the German. So there will also be a battle on for the bronze medal in the European Championships.