Fairytale Starts To The MXGP Of Spain For Gajser and Ferrandis 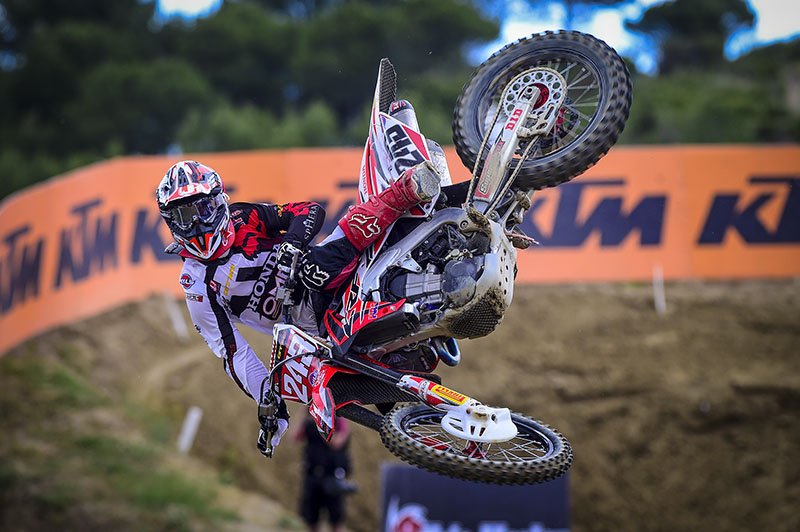 Motocross is the heart and soul of dirt-bike riding and a track like Talavera de la Reina is something that brings it all home as it embodies everything that grass-roots motocross riders love; rolling hills, steep drops, decent climbs, natural jumps, choppy bumps and gnarly ruts.

All of these elements were made extra challenging today at the ninth round of the FIM Motocross World Championship after a brief but heavy downpour had the riders on eggshells with the clay track throwing up slick spots, tacky ruts and square edged bumps.

Honda Gariboldi‰Ûªs rookie sensation Tim Gajser got off to a good start, which is essential in these kind of conditions, and checked out for his fifth qualifying heat win of the year, while it was a similar story for Monster Energy Kawasaki Racing Team‰Ûªs Dylan Ferrandis who took the holeshot in MX2 and led every lap for his second pole position of the season.

Also ripping up the sticky clay, Bodo Schmidt Motorsports‰Ûª Thomas Kjer Olsen extended his championship lead in the European Championship EMX250 class with a race win here at the fifth round, while the third rounds of the European Championship EMX125 presented by FMF Racing and EMX300 presented by FMF Racing saw KTM Silver Action‰Ûªs Stephen Rubini and Mike Kras take wins in their respective classes.

It‰Ûªs almost ridiculous how much craziness is happening in MXGP this year and it all started here with the local hero Marchetti Racing KTM‰Ûªs Jose Butron gunning it for a near holeshot but was edged out by Rockstar Energy Husqvarna Factory Racing‰Ûªs Max Nagl and Honda Gariboldi‰Ûªs Tim Gajser.

It‰Ûªs never good news for the main protagonists in the MXGP class when Tim Gajser is that far up front around turn one and he showed us why with a flawless performance for his fifth Qualifying Race win of the season.

After being passed heading into turn three by Gajser, Nagl stayed out of trouble in second while Butron had the fans fired up in third. Kemea Yamaha Official MX Team‰Ûªs Valentin Guillod was the MX2 grand prix winner here in Talavera de la Reina last year and was looking just as good on the bigger machine today in fourth.

In a dramatic turn of events, around lap three, Wilvo Virus Performance KTM‰Ûªs Shaun Simpson bobbled in the battle for fifth with Monster Energy Yamaha Factory Racing‰Ûªs Romain Febvre and Team HRC‰Ûªs Gautier Paulin. Febvre ran into the back of the Brit, lost balance and fell right into the flight path of Paulin who was fully committed to a rut. Paulin nailed his fellow Frenchman pretty hard and got tangled. As they tried to break free from each other, Red Bull KTM Factory Racing‰Ûªs Antonio Cairoli came out of nowhere and smashed into Febvre who was already on the ground. Febvre got back on his bike but went straight back to the pits while Simpson was later seen pushing his bike back with a broken chain.

Back to the battle up front, Butron dropped back as Team HRC‰Ûªs Evgeny Bobryshev found some nice lines and managed to pass Guillod for third. Guillod rode the best he has ridden all season for fourth ahead of Monster Energy Kawasaki Racing Team‰Ûªs Clement Desalle.

Credit to both Cairoli and Paulin who faced their fair share of hardships during the race and bounced back to sixth and eighth respectively. And also for you crazy fun-fact lovers, Tim Gajser and Max Nagl BOTH set the fastest lap of the race with the exact same lap time, 1:55.774, set on exactly the same lap! 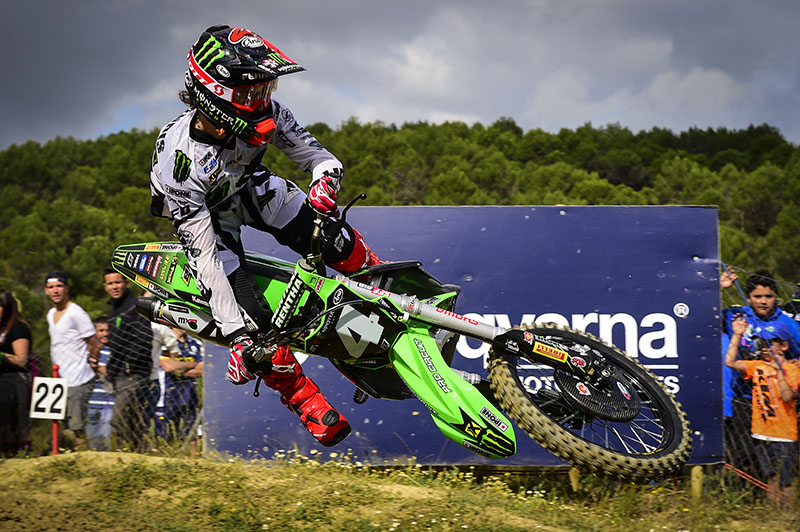 In the initial stages things seemed abnormally calm. Normally in MX2 all heck breaks loose on the opening laps, but everyone seemed to have their heads screwed on this time out as they searched for tidy and dry lines.

While not a lot was happening, Ferrandis livened things up with a ugly high-side in the same part of the track where Jeffrey Herlings threw it away spectacularly last year. He did save it though, it only allowed Paturel to close in, but he soon got things back under control and managed to lead every lap.

Around the halfway mark, Paturel was caught and passed by Red Bull KTM Factory Racing‰Ûªs Pauls Jonass who looked good up on the pegs through the deep mud ruts, very Stefan Everts-esque. Meanwhile, nobody ever expects Red Bull KTM Factory Racing‰Ûªs Jeffrey Herlings to ‰Û÷back it down‰Ûª but it seems he may have learned his lesson over the last few seasons as he rode pretty chilled after being squeezed on the start and only emerging out of turn one in about twentieth.

With two laps to go, that calmness we spoke of earlier in the race was biffed out the window and the brain in your lunchbox style of MX2 racing we‰Ûªve come to know and love was back.

Out of nowhere Herlings had everyone in his sight, including Ferrandis. Paturel definitely wasn‰Ûªt daunted by the challenge of the red plate holder and made life difficult for him before he scrubbed past to take third.

On the final lap, The Bullet was all over his teammate for second while Paturel remained in striking distance. As the duo of KTM riders approached a back-marker with only a handful of corners to go, the two forked, Jonass went inside and Herlings went outside. The back-marker obviously saw Jonass first and swerved right, right into the path of Herlings who was nudged off the track. Wham-bam and thank you mam, Paturel took back third and held onto it.

Herlings finished fourth in frustration ahead of Wilvo Standing Construct Yamaha Official MX2 Team‰Ûªs Aleksandr Tonkov and the young Italian Michele Cervellin who put in his best performance of the season for sixth.