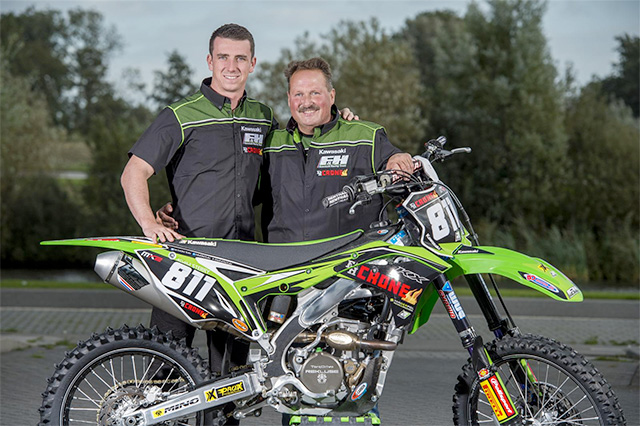 The F&H Kawasaki Racing team have Adam Sterry for the next two years with the British rider to contest the MX2 World Championship.

Before the start of the year, Sterry had signed a three-year official Kawasaki deal but, with the MX2 team leaving the paddock, the 21 year old from Sealand in Wales, UK was without a ride. Speaking to teams about his future led to talks with the F&H Kawasaki team who where pleased to secure his services for the next two seasons giving Sterry the opportunity to remain on a green machine. The team will receive support from Kawasaki throughout the course of the forthcoming season.

Unfortunately for the talented British rider it was a tough year as a torn ACL meant he missed much of the season. Before the injury he showed good speed and was knocking on the door of top ten results. His best finish was during the second moto in Indonesia when he came home in sixth and he will be hoping for more results like that to build on over the course of the next two seasons.

Sterry joins Ruben Fernandez under the team‰Ûªs awning for the 2018 MX2 World Championship campaign but the team will announce a third rider in due course.

‰ÛÏI am very happy and excited to join F&H Kawasaki for the next two years," Sterry said. "I am thankful for this opportunity after being injured most of this year but we will be back stronger than ever. I can't wait to start riding and testing with the team. I learnt a lot about the Kawasaki KX250-F this year and I'll be taking that into next year to help us achieve the results we work very hard for."

Harrie van Hout (F&H Team Coordinator), added, "I‰Ûªm really happy and looking forward to start working with Adam. That we could keep him inside our Kawasaki family is great news and we to have some successful years plus a lot of fun!"