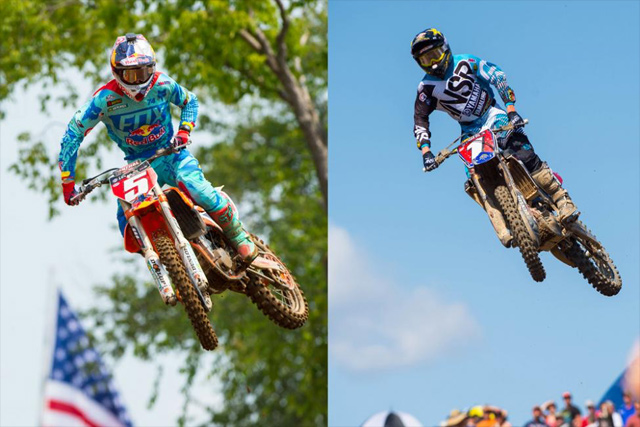 Coming off of its second break in action of the 2015 season, the Lucas Oil Pro Motocross Championship, sanctioned by AMA Pro Racing, will return to action for the eighth round of the summer with its annual visit to the Land of 10,000 Lakes, Minnesota.

The La Crescent Wine & Spirit Spring Creek National will host some of the world's fastest riders on Saturday, July 18, from Spring Creek MX Park in Millville with a pair of home state riders leading the 250 Class and 450 Class championships.

Dungey brings a 44-point lead into Spring Creek, where he has won a total of three times in the 450 Class, doing so consecutively from 2010-2012. Martin just regained the 250 Class points lead for the third time this season with his series-leading fourth win at the previous round, and brings momentum to the track owned by his parents, where he is the defending race winner.

While Martin enjoyed his second 1-1 effort of the season en route to victory at the series' last race on Independence Day at RedBud, it was someone other than Dungey standing atop the 450 Class podium. For the second straight race, Autotrader.com/Toyota/Yamaha's Justin Barcia emerged with the win after winning the final moto. 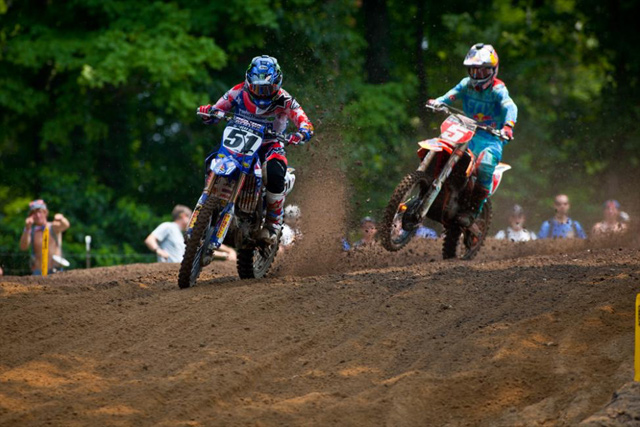 Barcia (51) managed to keep Dungey (5) at bay at RedBud and brings a two-race winning streak into Spring Creek. - Credit: Matt Rice
In each of those races Dungey won the first moto, and at RedBud it resulted in a tie for the win with Barcia, but the second moto tiebreaker ruled in the Yamaha riders favor.

As a result, Barcia has the most momentum in the series and now sits third in the championship, closing in on defending champion Ken Roczen and his RCH Soaring Eagle/Jimmy Johns/Suzuki Factory Racing team. A total of 19 points separate them.

Although Dungey has not won since the fourth round of the season, his consistency allowed him to not lose any ground to Roczen, instead extending his lead by seven points at RedBud. With his past success at Spring Creek and the hometown crowd on his side, Dungey no doubt feels poised to end Barcia's surge and continue to inch closer to another championship.

Both Barcia and Roczen will undoubtedly make that task difficult on Dungey, setting the stage for what could be a tremendously competitive afternoon on Saturday.

As the top three in the 450 Class continue their battle for victory, one rider will be making his return to competition on Saturday. Veteran Josh Grant has sat idle since the Chad Reed-owned Discount Tire Racing/TwoTwo Motorsports effort shuttered in late June, but despite missing the last four rounds of competition Grant will be back in action at Spring Creek aboard a Monster Energy Kawasaki.

While it signifies one of the best opportunities of his career, Grant's impending return is bittersweet as he will be filling in for Wil Hahn, who suffered an injury while training during the off week and will miss the next round. 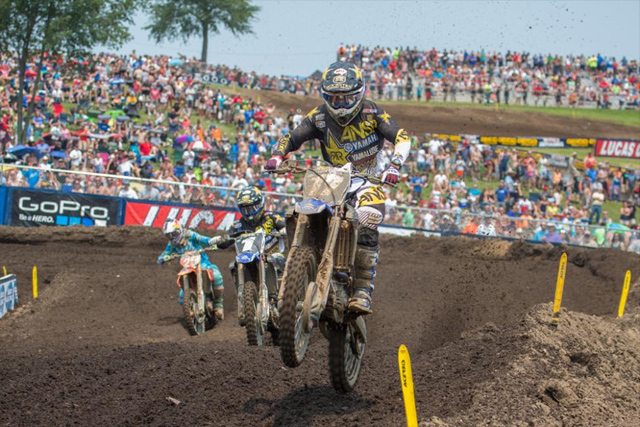 Webb (17) has forced himself into the mix for victory with Martin (1) and Musquin (25), searching for his first win of the season.Photo: George Crosland
In the 250 Class, Martin's season-long see-saw battle for the championship with Red Bull KTM's Marvin Musquin took another turn at RedBud.

Martin was impressive in a resilient ride to victory while Musquin, the points leader entering the race, endured arguably his worst outing of the season, finishing sixth. Musquin revealed he was dealing with aggravation to an injured wrist stemming from a crash at the third round of the season, which caused him to lose pace late in the motos. The off week was timely for Musquin's ability to mend before the next round.

In reclaiming the points lead, Martin now holds a slim seven-point lead over Musquin. This duo has traded the top spot in the championship on numerous occasions, neither able to hold it for more than two rounds. Martin's advantage at Spring Creek is unlike any other, growing up on the track that sits in his backyard, and he hopes it can lead him to back-to-back wins at home.

Musquin, on the other hand, is in search of redemption and hopes to become just the third international rider, and first Frenchman, to win in the 250 Class at Spring Creek.

The third rider likely to sandwich himself in between the lead duo is Martin's Yamalube/Star Racing Yamaha teammate Cooper Webb. At RedBud Webb looked to be en route to victory during both motos, only to have Martin steal the win away from him twice. The afternoon no doubt left a bitter taste in Webb's mouth and he'll have some unfinished business to take care of at Spring Creek, in search of his first win of the 2015 season.

Located in the scenic and beautiful Mississippi River Valley, Spring Creek MX Park has some of the richest soil on the circuit. The old farmland was turned into a motocross track in 1967, evolving into a destination for enthusiasts and it wasn't long before Spring Creek hosted a Trans USA event, Loretta Lynn's Regional Qualifiers, a National Hare Scramble and of course the Lucas Oil Pro Motocross National.

With John and Greta Martin at the helm since the mid-80's it has turned into one of the most state-of-the-art, modern establishments in all of motocross. With premium amenities, incredible sight lines and one of the most demanding tracks on the planet, Spring Creek MX Park is not only a destination, it's one of motocross' most prestigious venues.

Round 8 of the American Motocross Championship will air on Foxtel in Australia, check local guides for local listings.

Top Image: Minnesota natives Dungey (5) and Martin (1) enter their home race in possession of the red number plate, sitting atop their respective championships.