Dudek, Vaculik and LIndgren Elevated to SGP For 2017 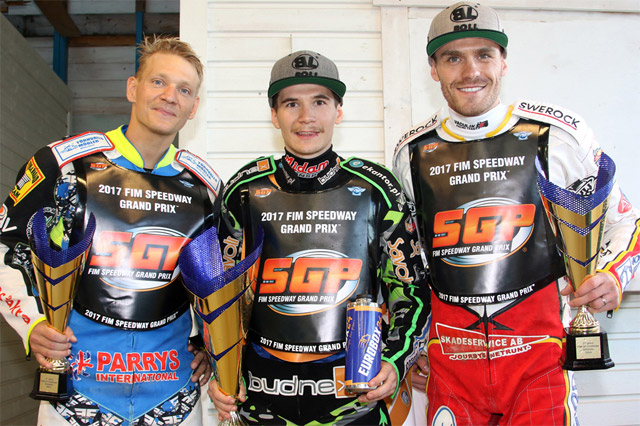 GP Challenge winner Patryk Dudek insists he doesn‰Ûªt fear the step up to the FIM Speedway Grand Prix elite after qualifying for the 2017 World Championship in Vetlanda on Saturday.

The Zielona Gora and Dackarna star capped an unforgettable year by triumphing in the GP Challenge with a 15-point maximum. He‰Ûªs joined in next year‰Ûªs SGP series by runner-up Martin Vaculik, who scored 14, and third-placed Fredrik Lindgren, who won a run-off with Kenneth Bjerre to qualify after they tied on 11.

Dudek was in unstoppable form in one of the most intense meetings on the world speedway calendar. He admits he quickly settled any nerves he had before the Swedish showdown, and now he can‰Ûªt wait to take on the world‰Ûªs biggest names in the 2017 SGP series.

‰ÛÏI felt a little pressure before the first heat, but when I took a few laps, I felt better and I felt very good on the bike and on this track. It was a perfect day. We didn‰Ûªt change the sprocket on the bike. I stayed with the same one all the time and it was brilliant.

‰ÛÏI think next year will be very good. Maybe the tracks won‰Ûªt be the same, but all the riders are the same because I race them all the time in the Swedish and Polish leagues. I think it will be good next year.

"I‰Ûªm happy. It‰Ûªll be my first time in the GP and I hope I can start in the GP all the time now.‰Û