It was a day of championship-deciding racing at the ninth round of the 2019 Pirelli MX Nationals with Todd Waters, Wilton Todd and Regan Duffy all putting themselves in prime position to capture their respective 2019 MX Nationals titles.

Read below for a run down on what proved to be an exciting day of racing at the penultimate round of the Australian Motocross Championship.

MX1 Back to Back Race 1
Empire Kawasaki's Dylan Long raced to the holeshot in the opening back to back moto in the MX1 class closely followed by DPH Motorsport Husqvarna's Todd Waters, while his championship rival Monster Energy CDR Yamaha's Luke Clout exited the second turn in 10th position.

After lap one, Waters made a move into first position, followed by Long, with Yamaha Yamalube's Richie Evans in third, with Clout working his way up to 7th.

Clout continued to work his way forward, though was coming under pressure from Privateer Jesse Dobson, until Dobson had a decent get off. Clout then made his move around Empire Kawasaki's Lawson Bopping for 5th.

As the race wound day, Gibbs moved his way by Long for second position, while Gibbs team-mate Clout moved into 4th after passing Evans.

At race end, Waters held on for a comfortable win over Gibbs, with Long rounding out the top three.

MX1 Back to Back Race 2
In an ominous sign for the competition, it was Waters who claimed the holeshot at the start of the second back to back race and quickly started to check out.

Clout put his championship hopes back on track, quickly moving into second position for a heads up race with Waters.

Clout was able to close the gap to Waters and start to pressure for the lead, with Davey Motorsports KTM Caleb Ward held down third position.

At race end, Waters held on for the win, ahead of Clout, with Gibbs passing Ward late in the race for third.

The move by Gibbs actually helped Wates championship hopes, as the move meant Gibbs finished second overall in the back to back moto format, leaving Clout third and with Waters winning he increased his championship lead to 9 points with three full motos remaining for the weekend.

Todd Waters continued his great day claiming the holeshot in the final MX1 moto for the afternoon.

Championship rival Clout quickly worked his way into third place behind Evans, but a mistake near the conclusion of the opening lap left Clout on the ground and at the back of the field.

Privateer Zak Small moved into third position, followed by Gibbs and Penrite Honda's Brett Metcalfe who was seen at the front of the field for the first time for the day.

Dobson who crashed out of the first race earlier in the day was a man on a mission, moving his way past both Metcalfe and Evans to take over third spot, but as quickly as he moved forward Dobson was falling through the field after tucking his front end in a turn for his second big crash for the day.

On the same lap, Clout had another issue, with a second crash pushing him all the way back to 16th position.

Long who finished third in the opening morning of the day continued his excellent form, closing in on Evans before making the pass for 4th.

At the halfway mark of the race, Waters continued to hold a solid two-second lead over Gibbs, with Metcalfe in third coming under pressure from a fast-charging Long, who eventually made a move into third.

For championship, hopeful Clout things were not looking much better still down in 13th position.

At race end it was a comfortable win for Waters ahead from Gibbs, also giving the duo first and second for the round with Long's third in the final moto being enough to provide him with third overall for the round.

Clout finished the race down in 10th position, and in doing so dropping a further 14 points to Waters, giving Waters a handy 23 point lead heading into the final two motos of the 2019 championship.

Behind them, Serco Yamaha's Nathan Crawford and Yamaha Yamalube's Jay Wilson who is also in championship contention battled for third.

At the 10 minute mark of the race, Todd turned the tables, re-taking the lead and quickly establishing a small gap, Webster continued to hold second from Wilson, Crawford 4th, while Davey Motorsports back Dylan Wills held off Serco Yamaha's Aaron Tanti for 5th.

At the midpoint of the race, Crawford made his by Wilson for third, while Wills and Tanti both closed in on Wilson, making for a three-way battle for 4th.

As the race came to a conclusion, Todd had a comfortable 10 second lead out front, while Crawford continued his push in the second half of the race, chasing down and passing Webster for second position, while Tanti moved his way by Wills for 5th.

In a dramatic final lap, Crawford was quickly chasing down Todd for the lead before a backmarker interrupted his run, allowing rejuvenated Webster to swing by to reclaim second position and keep his championship aspirations alive.

At the line, Todd held on for a narrow .7 of a second win from Webster with Crawford in third.

DPH Motorsports Husvarna's Bailey Malkiewicz launched out to the holeshot in the second moto, just ahead of Thomas Ravenhorst.

Malkiewicz rounded the opening lap in the lead and was closely followed by Webster, with youngsters Riley Ward and Morgan Fogarty sitting 3rd and 4th, while championship leader was just outside the top five.

Malkiewicz race lead all come undone at the 5-minute mark after he cartwheeled out of contention, leaving Webster in his bright pink Retro looking THOR Bad Boyz set up taking the race lead, with Todd moving into the second position with Jay Wilson in third.

Webster's lead was short-lived as Wilson Todd took another step towards back to back MX2 championships taking the lead and quickly checking out setting the fastest lap of the race.

At the halfway mark of the race, Todd held down a 2 second lead over Webster with Wilson a further two seconds back in third, with the Serco Yamaha pairing of Nathan Crawford and Aaron Tanti holding down 4th and 5th positions.

With two laps to go, Webster put in another charge and closed right back in on Todd to challenge for the lead, however Todd proved to be too strong and raced away with his second race win of the day and will head into the final day of the 2019 MX nationals tomorrow with a 24 point championship lead over Webster.

Liam Walsh from the Northern Territory rocketed to the Holeshot, while championship leader Regan Duffy was buried deep in the field.

At the end of lap 1, it was Walsh leading from Honda's Rhys Budd, with Jayce Cosford in third, though both riders quickly come under pressure from Noah Ferguson, while Duffy quickly moved his way into contention.

Ferguson continued his charge and by the end of the second lap moved his way into second position, and a lap later took control at the front of the field.

Cosford on his Yamaha YZ250 two-stroke, was the next rider to find his flow, moving his way into second place but the rider everyone was watching was Duffy who railed his way into third before quickly railing past Cosford for second.

A mistake by Duffy saw all his hard work undone, with a handful of riding including WBR Yamaha's Max Purvis who came from deep in the field moving his way into third then quickly into second.

With four laps to go Purvis made a mistake hitting the ground, quickly re-grouping right alongside of Duffy back in 4th position. Jai Walker was the silent assassin working his way into second position, though it was short-lived as Purvis with blistering speed soon returned to second.

In an unbelievable show of speed, Purvis who finished the opening lap in 27th and suffered a small crash mid-race, put in laps faster than the fastest lap in the previous MX2 race and with one and a half laps to go made his way past Ferguson for the race lead.

The race was not over with Purvis making a mistake early in the final lap, going over the back of a berm, allowing Ferguson to re-take the lead. Purvis recovered and once again went to work, reclaiming the lead with a handful of corners to run, crossing the finish for the win ahead of Ferguson with a fast-finishing Duffy rounding out the top three

MXD Moto 2
Ty Jones and Rys Budd were side by side across the holeshot line as the final MXD moto of the day got underway.

Budd took control of the lead on the opening lap, leading across the finish line for the first time, with Ferguson and Jones close in tow. Like the opening race of the day, both championship leader Duffy and Purvis were left buried deep in the field on the opening lap.

Purvis who wan on another level in the opening race, quickly cut his way through the field and by the end of lap two was leading the way ahead of Ferguson, while Duffy consolidated his championship hopes moving into third spot; then a handful of laps later making his way past Ferguson for second.

At race end, it was Purvis holding on for the moto and round win ahead of Duffy with Ferguson in third. 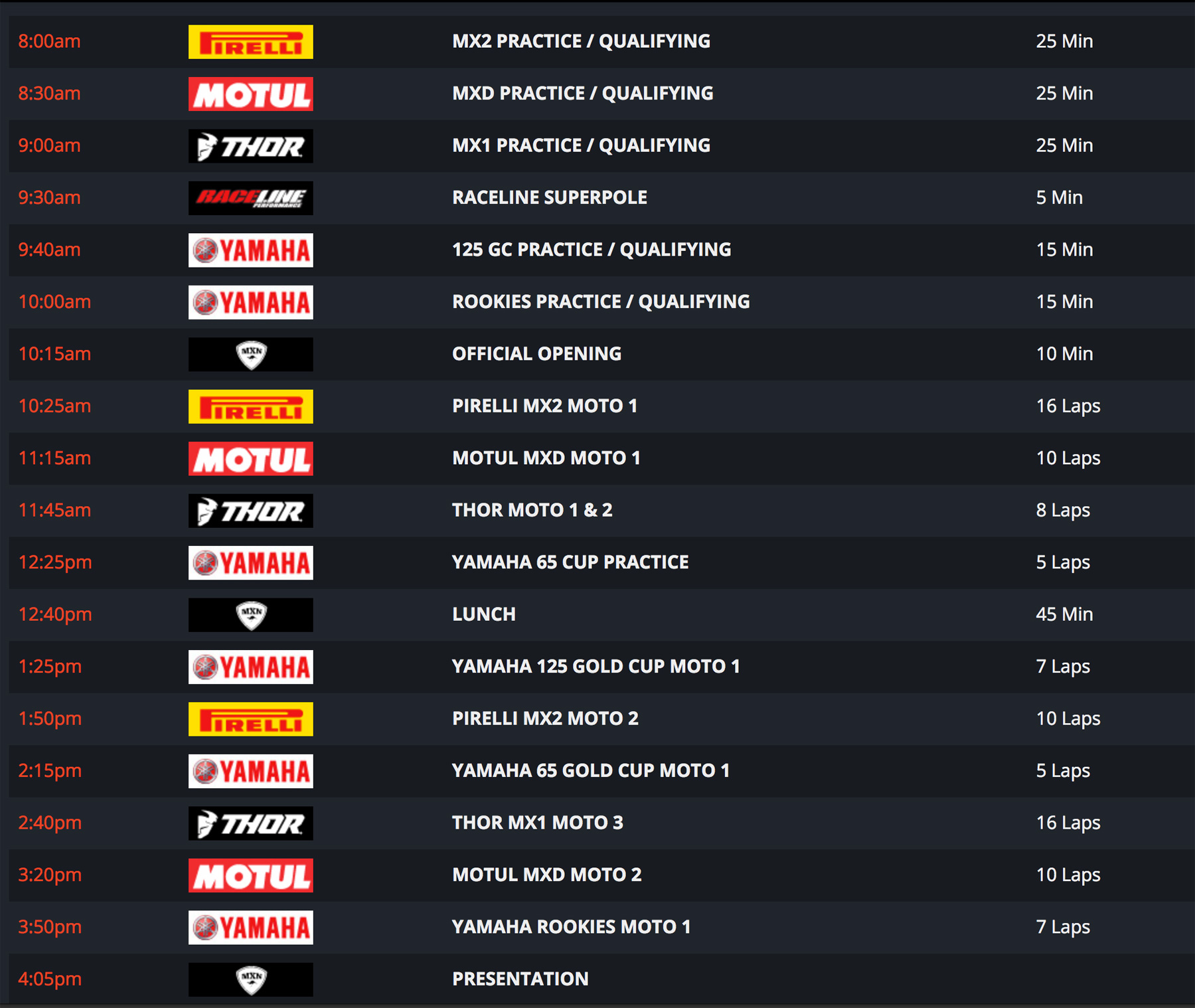