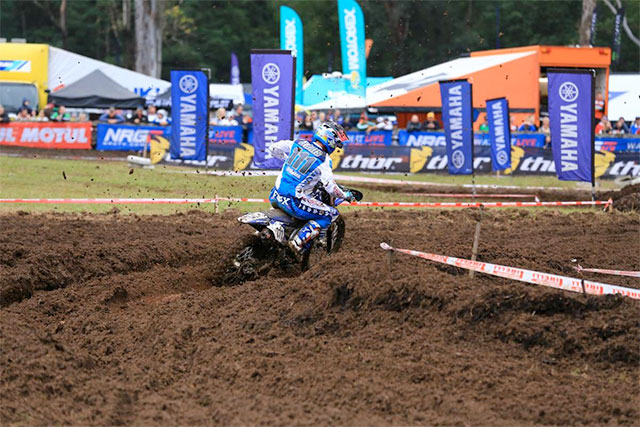 CDR Yamaha‰Ûªs Dean Ferris has taken the round seven victory, and made up valuable points in the Thor MX1 championship, at the picturesque Green Park circuit for the offiicial 'Retro Round' of the Motul MX Nationals at Conondale in Queensland.

Despite the venue receiving a good drenching of rain throughout Saturday night, when racing got underway today, the skies had cleared, and the revitalised freshly laid out circuit provided the perfect stage for today‰Ûªs action to unfold.

When the Thor MX1 bikes hit the track for their practice and qualifying session, many riders opted to spend much of their time in the mechanic‰Ûªs area, minimising the dirt build up on their machines, and keeping the weight off to ensure fast times.

When the gate dropped on moto one it was Crankt Protein Honda Racing Team‰Ûªs Dylan Long who fought off a hard charging Waters to take the first MXStore holeshot of the day.

However, with a crew of Red Bull cameramen on hand at Round 7, Waters was determined to put on a performance, and it took no time at all for him to move in to the race lead, while Ferris also managed to get by Long to slot in to second position.

From there, Ferris and Waters checked out, leaving Long, Mosig, Gibbs and Jay Wilson to fight for the remaining positions behind them. And battle they did. After only a few turns, Mosig and Gibbs made their move on Long to slot in to third and fourth positions, leaving the Crankt Honda duo in fifth and sixth places.

With only nine minutes run, the Thor MX1 class began to head in to lapped traffic, allowing Ferris to close in on Water‰Ûªs lead, and set the first moto up as a dash to the finish line.

And thankfully for spectators, the battles on track did not stop there ‰ÛÒ with Gibbs also edging closer and closer to Mosig‰Ûªs rear wheel, the KTM mounted rider determined to snatch up valuable championship points, and minimise the damage of Water‰Ûªs and Ferris‰Ûª domination.

By the time race one had reached the half way point, the running order had only slightly changed. Waters continuing to lead from a hard charging Ferris, followed by Mosig and Gibbs who were locked in to a battle for third. The Crankt Protein Honda duo Wilson and Long, held down fifth and sixth places respectively.

As race one reached its closing stages, Waters and Ferris were riding on a level above the rest ‰ÛÒ attacking the muddy conditions, and using their European experience to showcase just what they could do at Conondale.

And when the last lap board was shown, Waters had maintained enough of a gap on Ferris to relax a little, however for Mosig, the final lap would be far from relaxing ‰ÛÒ Gibbs making one final attempt at third position before the chequered flag would fly.

However, when riders crossed the finish line, it was Waters who had reason to celebrate, taking the opening moto win, with the support of family and friends watching on. Ferris put in a smart ride to finish in second, followed by Mosig who held off Gibbs to finish in third. Gibbs, and Wilson completed the top five finishing positions respectively.

With championships on the line, when the gates dropped in race two, spectators expected to see one of the top three championship contenders through turn one first, but it was the Crankt Honda machine of Wilson who took the hole shot and moved in to the race lead.

However, he didn‰Ûªt stay there for long ‰ÛÒ after only a few turns Wilson stalled, allowing Ferris, Waters and Gibbs to move up to positions one and two and three.

But in what was a big upset for race one winner Waters, the Suzuki rider went down on lap one, and was forced to re-join the race in 14th position, dashing his hopes of an overall victory at Conondale.

From there, spectators were treated to plenty more action on track, with Ferris continuing to lead and holding off Gibbs by less than a second, while Mosig kept the lead pair just in his sights in third position.

But it was Waters‰Ûª charge from the rear of the pack to fifth by the 11-minute mark, that had spectator‰Ûªs eyes firmly fixed on the Suzuki machine ‰ÛÒ Waters making the pass on Wilson, and from there he began to eye off the rear wheel of fourth placed Jacob Wright.

By the time the Thor MX1 class reached the halfway mark in moto two, Ferris continued to maintain his gap on Gibbs, while Mosig had dropped off the pace but maintained third position - Waters had made his way in to an impressive fourth, while Wright completed the top five places.

As riders reached the 20-minute mark, Waters had reeled in Mosig, and with maximum points well and truly on his mind, Waters made the pass on Mosig for third position, keeping his championship hopes alive.

And it was in that order that they stayed. Ferris taking the final moto win from Gibbs who crossed the finish line for the last time today in second. Waters who put in one of the hardest fought rides of the day, charged back from his earlier crash to finish in third.

With 2,1 results, Ferris was deservingly awarded with the round seven victory, while Waters took second on the day, followed by Gibbs in third. Gibbs retains the red plate and continues to lead the Thor MX1 Championship by six points.

‰ÛÏI‰Ûªm really happy to get another round win. It was one of those rounds where it could have gone either way because of the conditions. I‰Ûªm usually pretty comfortable in the mud, but so are Todd and Kirk,‰Û