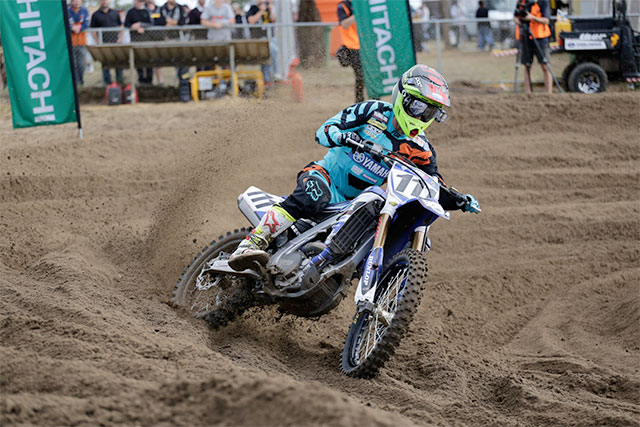 CDR Yamaha‰Ûªs Dean Ferris went from triumph to tragedy in the blink of an eye after a huge fall on the opening lap of the final moto at round five of the MX Nationals held at Wanneroo, WA, over the weekend.

The grueling sand circuit throws up all kinds of challenges and Ferris met most of those challenges throughout the day as he mastered the toughest track on the MX Nationals calendar. He posted the fastest lap in Superpole to take first pick of the gate and a handy few points to go with it before bursting out of the block in the opening moto.

He then took control of race one and cleared out to a very handy lead before a lapped rider fell and speared his bike into Ferris‰Ûª factory YZ450F. Dean scrambled back to his bike and managed to rejoin the race just a few bike lengths clear of the ensuing pack and went on to take the race win.

Moto two and Ferris was again in control and took a wire to wire win and looked on track for a red letter day.

But within seconds of the fall of the gate in race three, it all turned pear-shaped. Ferris rounded the first turn rubbing shoulders with Kirk Gibbs and both fighting hard for position. On the exit of the first turn and over a high speed single jump, both riders‰Ûª lines crossed with Ferris clipping the back of Gibbs and hitting the deck hard.

He lay on the track as the rest of the field took evasive action and the medics scrambled to the downed rider. Ferris was assisted from the track and under the care of the RACESAFE crew before transported to Hospital.

After a range of scans and tests last night, Ferris has been cleared of any serious issues around his head and neck and he has no long term concerns. He will remain in Perth while further tests are carried out on his left wrist and CDR Yamaha will release more information as it comes to hand.

‰ÛÏI was standing directly behind where Dean went down and from what I saw, it didn‰Ûªt look good. I could see both riders fighting for the same space of track and two strong willed riders not giving in. It was a racing incident and in no way do we believe Kirk Gibbs is at fault and we thank him for coming over immediately after the race to enquire about Dean.

‰ÛÏAs a team we targeted the WA round as we knew it would be a major factor in the championship. Dean is a strong sand rider and everything was on track until the start of the third race. Dean looked amazing and was a step above the other riders all day.

‰ÛÏUnfortunately, this crash was a disappointing way to end the day but Dean has our full support and hopefully we can get the results back on his wrist ASAP and make a plan moving forward.

‰ÛÏWe lost a few points there but in no terms are we out of this championship, Dean and the CDR Yamaha team are fighters and we will continue to keep swinging and fight this out to the very end,‰Û