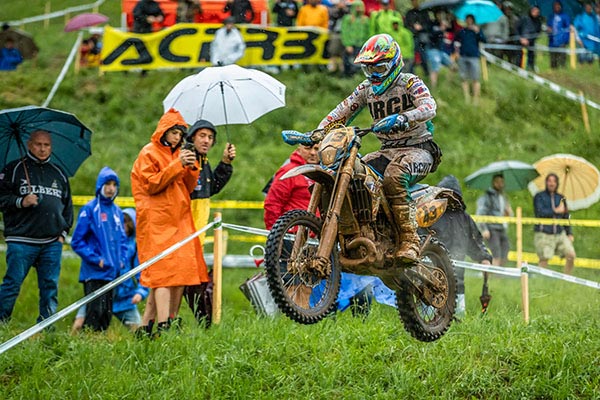 Danny McCanney
The weather had its say on day 1 of competition at the 5th round of the Maxxis FIM Enduro World Championship, the Acerbis Grand Prix of Italy, with Danny McCanney ending the day victorias.. just!

The legendary 'Valli Bergamasche' race is known for being tough and unpredictable, and this was certainly the case on Saturday as very violent storm swept through the Rovetta area all day long. This altered the race conditions drastically and EnduroGP's competitors spent a hellish day between rain, mud, and thunderstorms.

Four men shared the top spot over the course of the day, taking it in turns to lead. Matteo Cavallo, Honda'a Thomas Oldrati, Beta's Steve Holcombe and TM's Danny McCanney all had their time in the spotlight, but it was the Manxman who took the spoils at the end of the long and punishing day.


The 2018 Junior World Champion, Cavallo took control of the race at the start of the day, leaving Oldrati in his wake, with the local rider overwhelmed by the presence of his many supporters. The two Italians were followed closely by a rider who loves these kind of conditions: the quadruple World Champion, Holcombe. The Brit seemed on great form despite his health woes.

The four protagonists had an absolutely fantastic battle over the three laps which made up today's racing. The top position alternated between Cavallo and Oldrati, and then back to Holcombe. But it was Danny McCanney who put an end to this constant switch up when the factory Beta rider pipped his rivals by 6 thousandths of a second.

"I'm thrilled, this first EnduroGP win means lot to me," McCanney said. "The day began badly - my chain came off in the first Extreme test, but when the rain started pouring down I felt very comfortable with the conditions. I am really happy with today's result!‰Û