Danny Kent Storms to Moto3 Victory at the Sachsenring 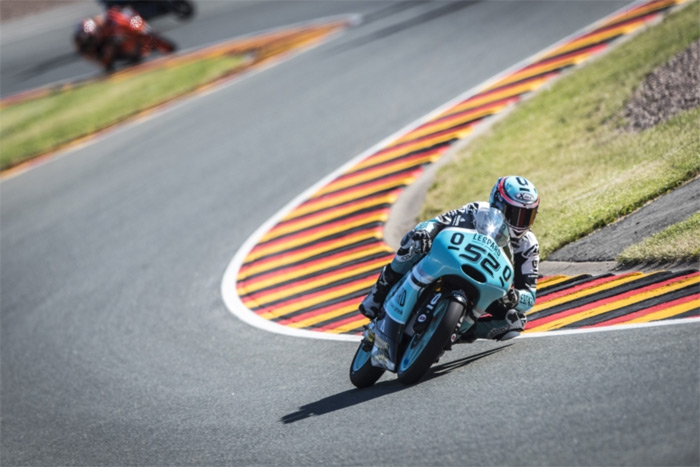 Danny Kent aboard his Leopard Racing Honda NSF250RW had another of his remarkable runaway wins in the closest-fought class of them all to cross the line 7.5 seconds in front of the field in the Moto3 race held at the Sachsenring overnight.

Chased by team-mate Efren Vazquez and Enea Bastianini (Junior Team Gresini Moto3 Honda NSF250RW), Kent took several laps to get into his stride as his rear tyre came up to temperature, then he moved into the lead on lap three and recorded a series of immaculate laps to put him well in front of Vazquez, who was in turn comfortably ahead of a frantic battle for third, which at one point numbered seven combatants.

Most of this group had their moment in the spotlight, including Niccolo Antonelli (Ongetta-Rivacold Honda NSF250RW), Alexis Masbou (SaxoPrint RTG Honda NSF250RW), Jorge Navarro (Estrella Galicia 0,0 Honda NSF250RW) and Andrea Locatelli (Junior Team Gresini Moto3 Honda NSF250RW). The final laps were particularly frantic, with only centimetres to spare between the group.

Finally Bastianini‰Ûªs aggression paid off and he took his fourth podium of the year by just 0.026 seconds. The entire group fighting for third was covered by less than one second at the flag.

‰ÛÏI‰Ûªm so happy about this win because this track is a really demanding one." Kent said. "Through all these corners and of course the long distance with 27 laps it isn‰Ûªt easy to stay focused, especially when riding alone at the front. But in the end I managed it well so thanks to that I was able to extend our championship lead further.

"After we were so strong during all practice sessions as well in qualifying practice the race started not that great as I had expected. I didn‰Ûªt make a great start when I dropped down some positions and I struggled a bit with the tyres and I had one moment with a big slide in turn twelve.

"Anyway, from that point the tyres got better so everything went according to our plans. Due to our strong pace in practice sessions and qualifying we knew that we could do a good race today. I‰Ûªm very happy how things went through the first part of the season to be able to perform consistently that strong, so now I look forward to some relaxed weeks with a fine championship lead.

"A huge thanks to my team and all staff, great job done every time.‰Û