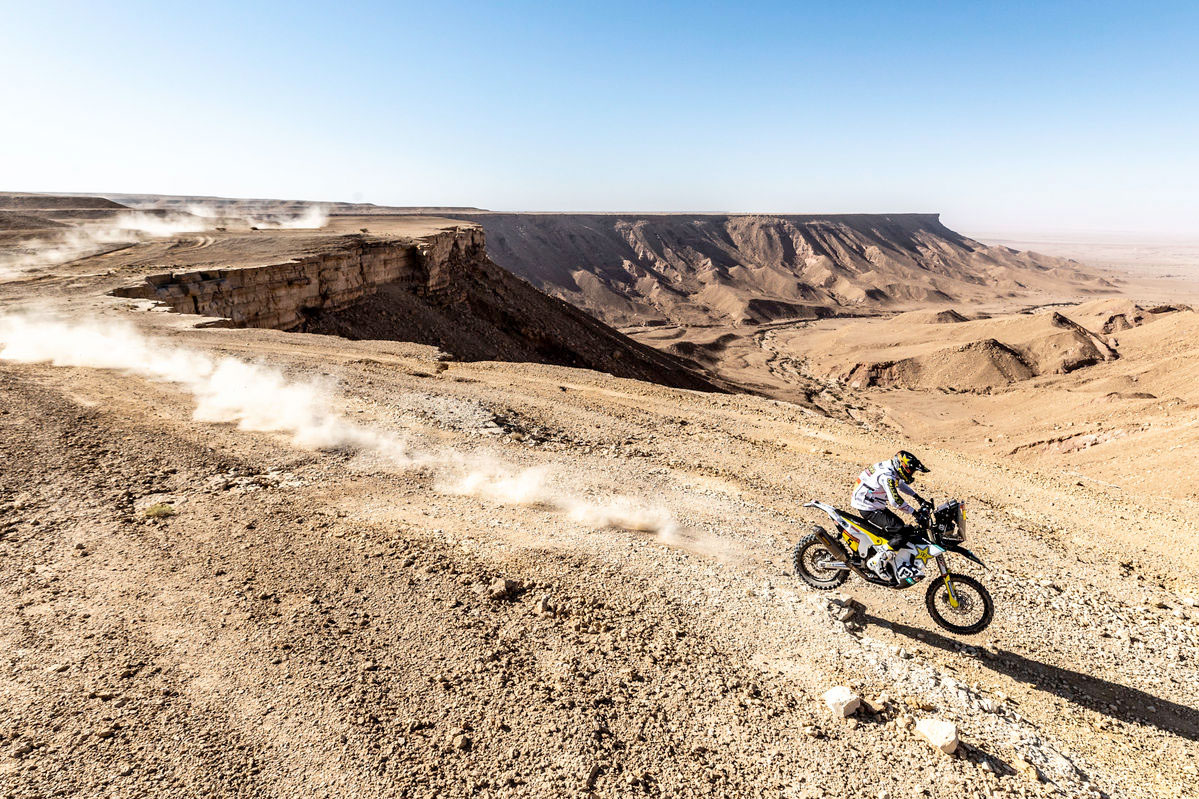 Following his eighth-place finish on Sunday, Pablo Quintanilla felt comfortable from the off this morning and was immediately able to push on the hard-packed surface. Photo: Rally Zone
Pablo Quintanilla has ridden to victory on the 410-kilometre ninth stage of the 2020 Dakar Rally to claim his first stage win this year ahead of Toby Price and Joan Barreda.

With stage eight of the rally cancelled in memory of Paulo Goncalves, the motorcycle class returned to action early this morning with the 886-kilometre stage nine from Wadi Al Dawasir to Haradh. Crossing the Saudi Arabian ‰Û÷Empty Quarter‰Ûª riders were faced with a wide variety of terrain including dirt, sand and stony tracks as they navigated around canyons and riverbeds.


Following his eighth-place finish on Sunday, Quintanilla felt comfortable from the off this morning and was immediately able to push on the hard-packed surface. Third quickest to the first checkpoint, Pablo made his way past several riders in front to take the provisional lead by kilometre 244. Maintaining that position to the finish, despite pressure from riders behind, the two-time world champion claimed the win by almost two minutes from Toby Price. With three stages left to race, Pablo sits second overall in the provisional standings.

‰ÛÏIt was a strange feeling this morning after what happened to Paulo, but I think it was good to get riding again," Quintanilla reflected. "There was a long liaison this morning and it was very cold, but I felt better when we hit the special and I was able to push right away. In the end, I won the stage, which was a fitting way to honour Paulo. But now, with stage eight cancelled, my strategy is more complicated. My goal from here is to push and try to make up as much time over the final three days as possible.‰Û 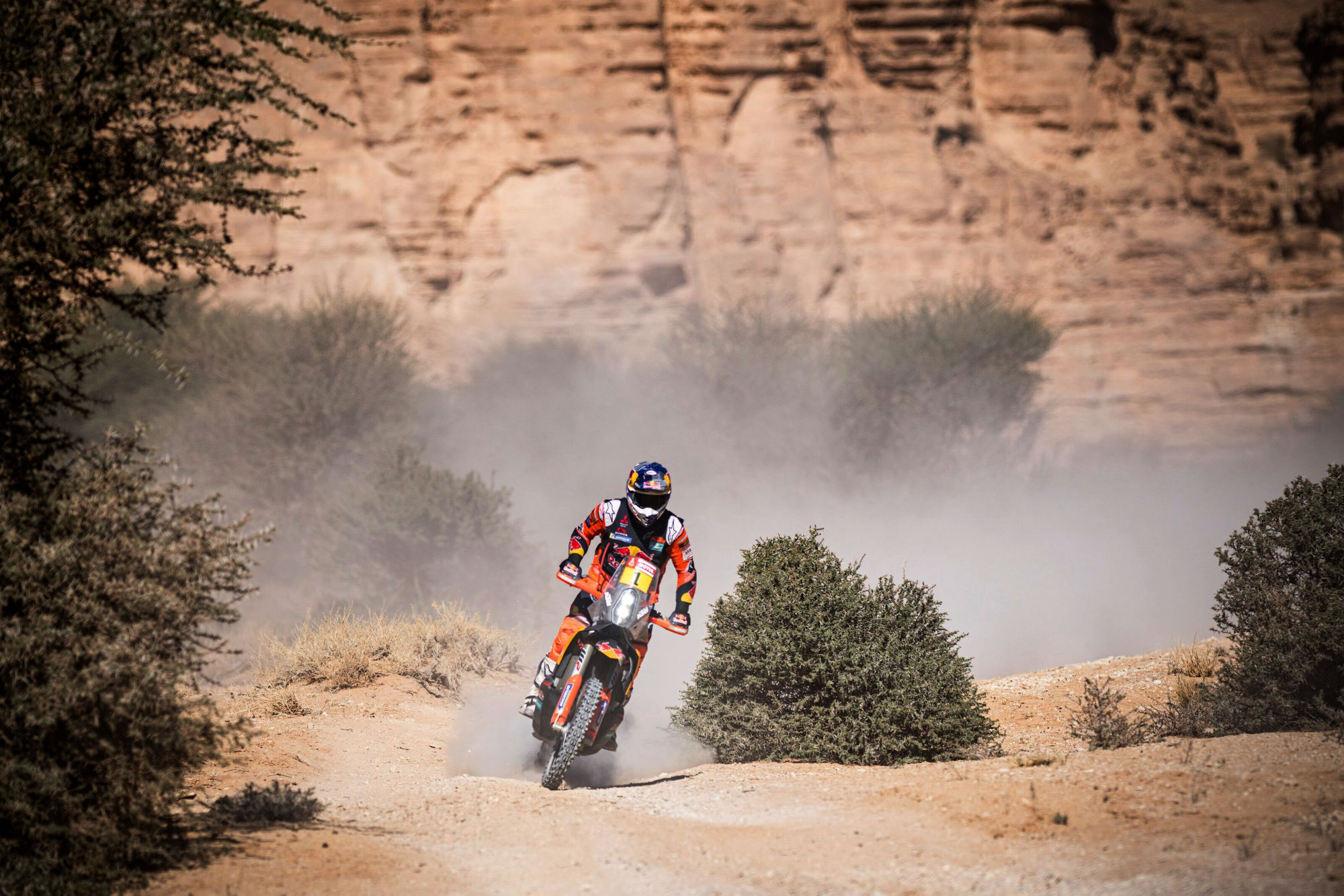 "I‰Ûªm happy to have that stage behind me and now I can really focus on the small number of remaining days to try and close this gap up to the lead, bring in the marathon stage tomorrow!" Toby Price said
Following an extremely tough stage seven on Sunday, Toby Price did his best to regroup and focus for today‰Ûªs stage nine. Seventh into the 410-kilometre special, Price was immediately on the pace ‰ÛÒ posting the quickest time to the first checkpoint. With the stage proving to be relatively straightforward, times at the top between the front runners were very tight.

‰ÛÏIt‰Ûªs been a long day today and with it being so fast, it‰Ûªs was really difficult to make up any time on the others as we‰Ûªre all so close on these full-gas stages," Price explained. "Obviously, it‰Ûªs been a really tough day mentally but we‰Ûªre still cruising along in the race and the main goal as always is to make it safely to the finish line. We entered the Empty Quarter a little today but to be honest we only had 30 kilometres or so of dunes. I‰Ûªm hoping these next few days will feature more. There‰Ûªs definitely a lot of kilometres left to go so we‰Ûªll just try and keep it on two wheels.‰Û 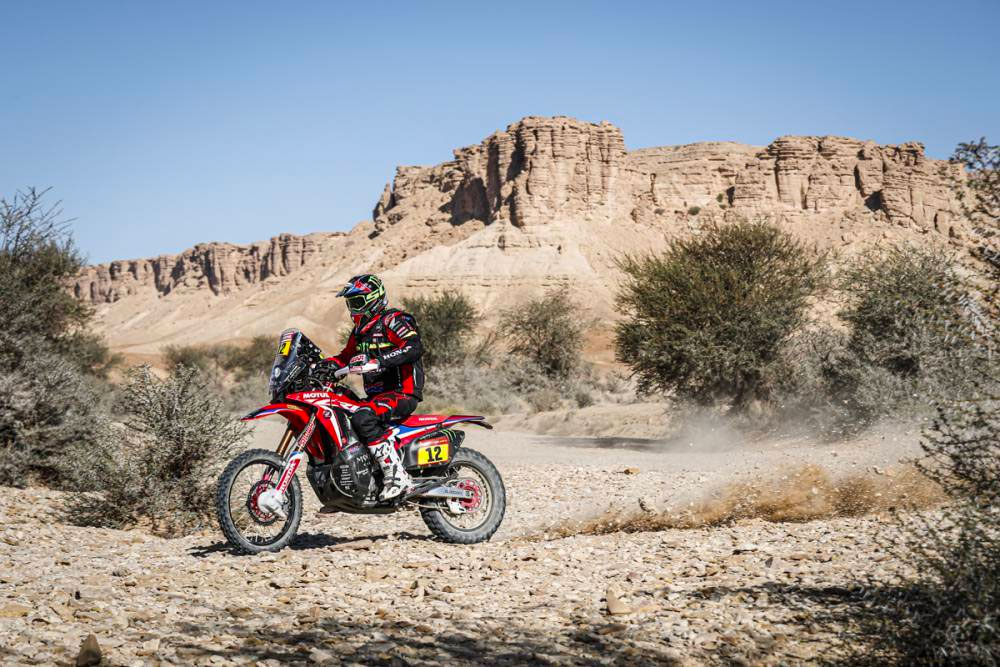 "A good sporting day. I started out second and already by the refuelling I was opening track and overtook Kevin," Barreda said. "Then the dunes arrived and there was a confusing area of navigation. Finally we were able to maintain good pace and make it to the finish line well. I've been opening track and moving forward for several days and it's not easy. There are two stages with sand, then a shorter one, so it won‰Ûªt be easy to reduce the time. We will try to take it day by day and cut the time down as much as possible." 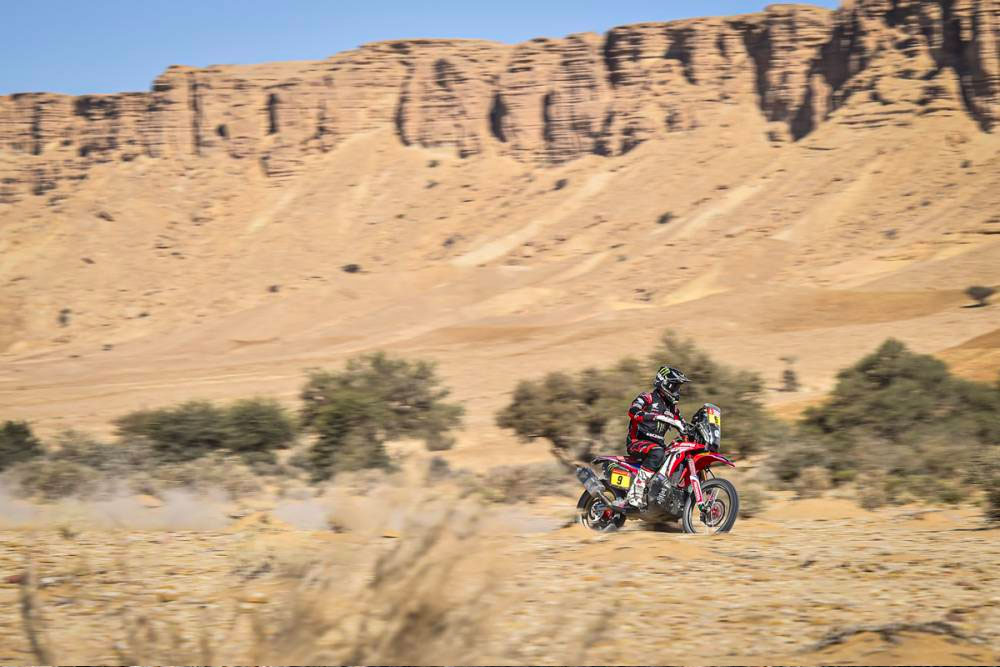 Ricky Brabec was fourth on stage and still maintains a twenty minute lead in the overall rankings. Photo: DPPI
Ricky Brabec managed the gaps at the head of the field extremely well to finish fourth and maintain the overall lead of the Rally. The the American Monster Energy Honda Team rider will have a favourable starting position tomorrow, having conceded very little time in the stage today.

"We feel pretty good. We are here at a windy bivouac. We are another day closer to the American dream of winning the Dakar," Brabec said. "There‰Ûªs three days left and tomorrow is the marathon. We have a lot of racing to do. The main goal now is to focus and stay positive after the incident that happened a few days ago. Right now we are going to rest and make sure our bikes are 100%, get some food, pack our bags for the marathon and try to stay positive.

"There‰Ûªs a 21-minute gap in the general. So tomorrow Quintanilla and Toby start in front of me so the plan is to maybe catch them or maybe keep them in my sights. That way they will start in front of me for the next few days. I‰Ûªm not really sure what is going to happen so we are just going to stay focused and not lose the twenty-one minutes. The marathon stage is really cool and is very relaxing. You don‰Ûªt have to see the team and it‰Ûªs only the riders in the bivouac. You can really soak in the camp life, because by now it‰Ûªs stage ten or eleven and it‰Ûªs nearly time to go home. It‰Ûªll be nice." 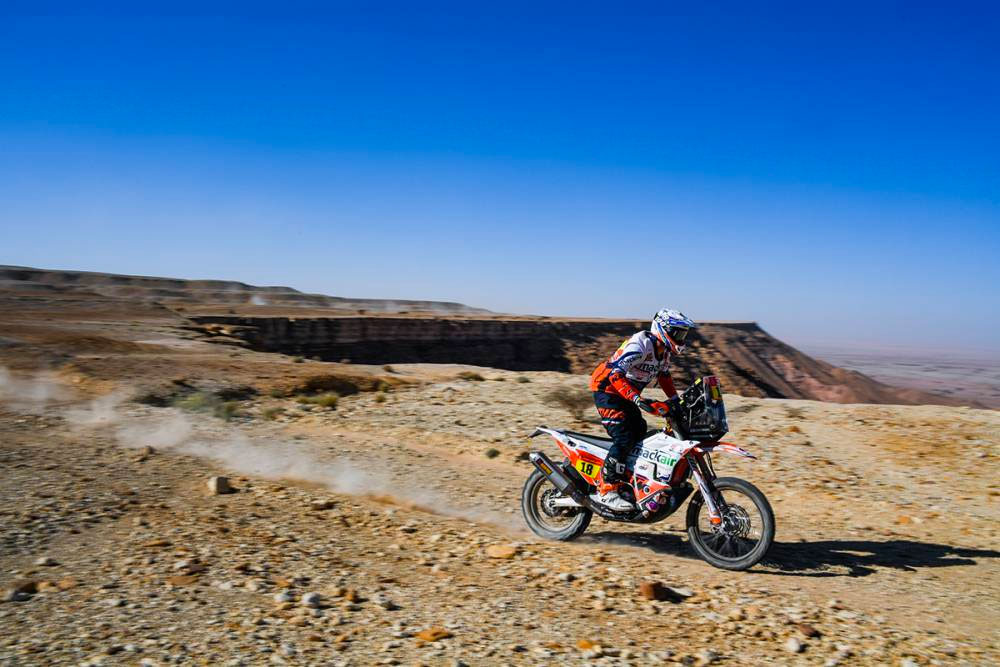 The Benavides brother came in together with the elder, Kevin, coming home sixth ahead of younger brother Luciano in seventh.

"Today it was hard to restart the race. I thought a lot about Paulo at the beginning of the stage, I know he would have wanted us to continue, he always transmitted that strength to get ahead. I have done so and I concentrated a lot," Kevin said. "Today the stage was difficult at a navigational level and quite dangerous with river routes and a lot of stones. Then it began to open out into the desert and began to speed up. For 360 kilometres I opened the track and then Joan arrived and we rode together the remaining 40 kilometres. It was a great stage, with good team work together, so I‰Ûªm very happy" 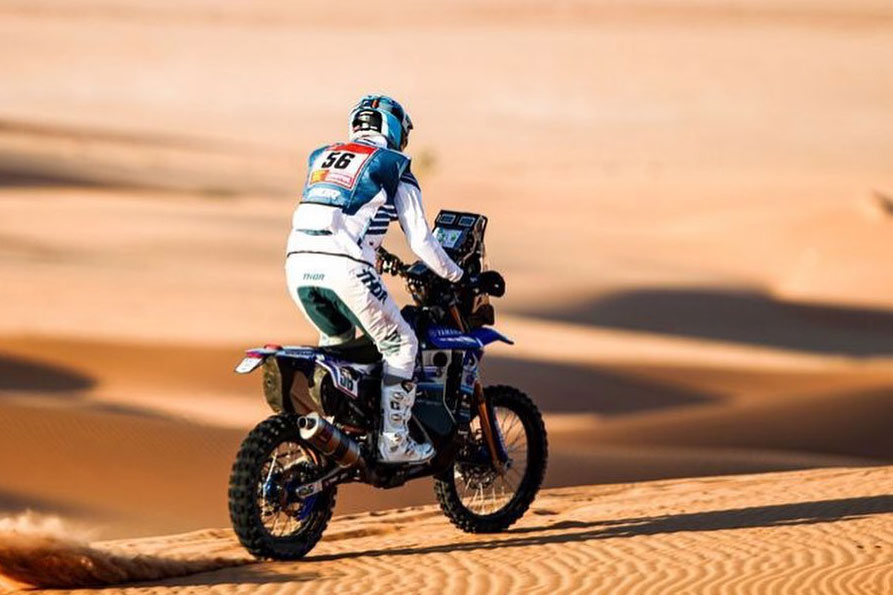 Another good day for Australian privateer Rodney Faggotter with 18th on stage and is now 13th overall.
An ideal starting position for JosÌ© Ignacio Cornejo, sixth rider away, should have resulted in a better finish in Haradh than the eighth posted by the Chilean who was ill at ease in the opening stretches of the special, dropping time which he later recovered once the race moved out onto open ground.

Andrew Short and Matthias Walkner rounded out the top ten.

"Today did 880+ klms! Solid day," Faggotter said. "Bike is down on top speed of the factory bikes but I'm happy with everything else riding hard in the rough stuff to stay fast. Last few stages have been pretty boring track/racing wise and super fast- but the scenery is magic! Like moonscape in places."


Stage 10 of the 2020 Dakar Rally marks the first half of the second week‰Ûªs marathon stage. Riders will first complete a 534-kilometre timed special on Wednesday before staying overnight in the marathon bivouac at Shubaytah and returning on Thursday to Haradh. No outside assistance is allowed on the marathon stage so competitors must conserve their tyres and machines in order to complete the challenging two days without incurring a penalty. 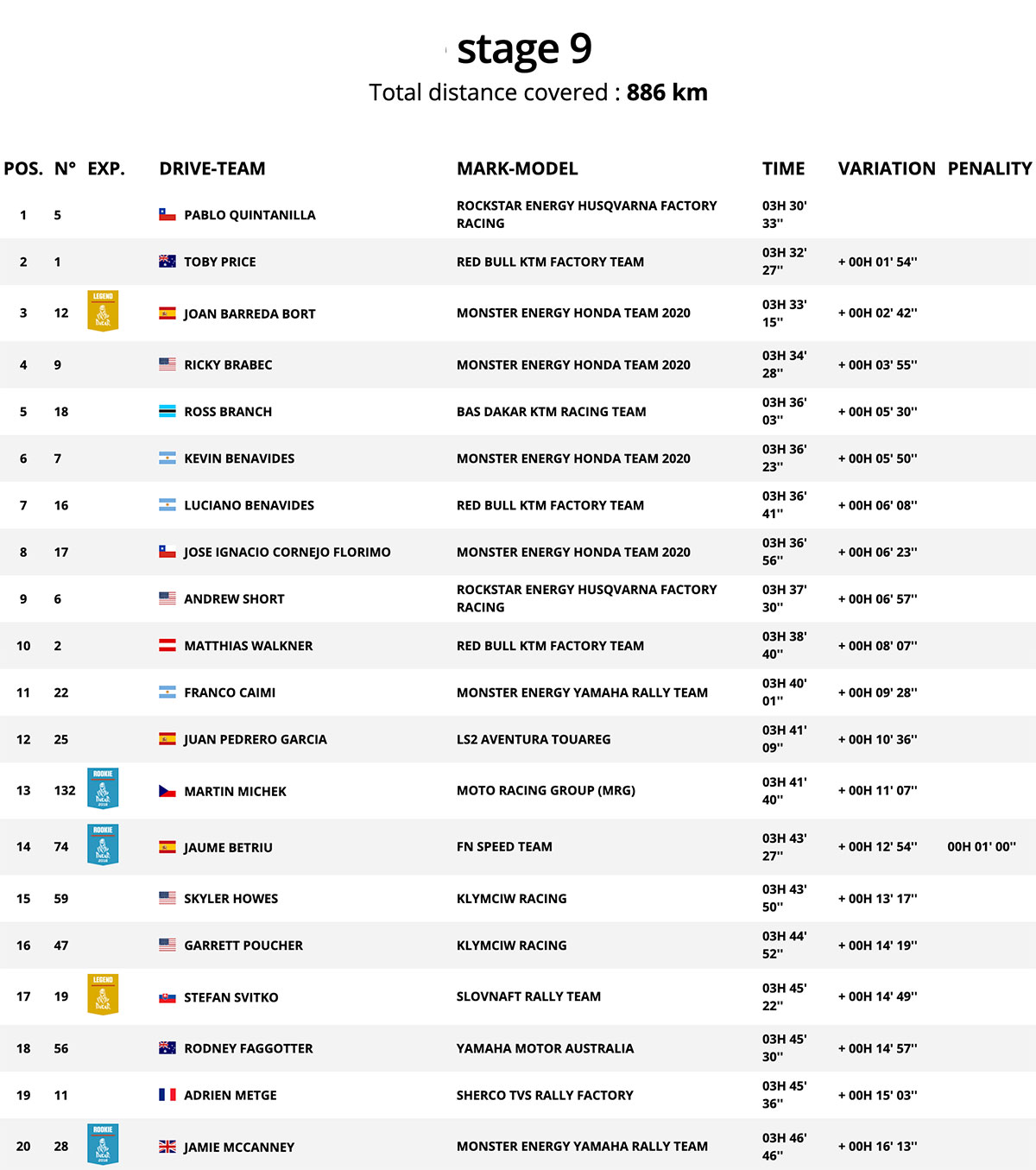 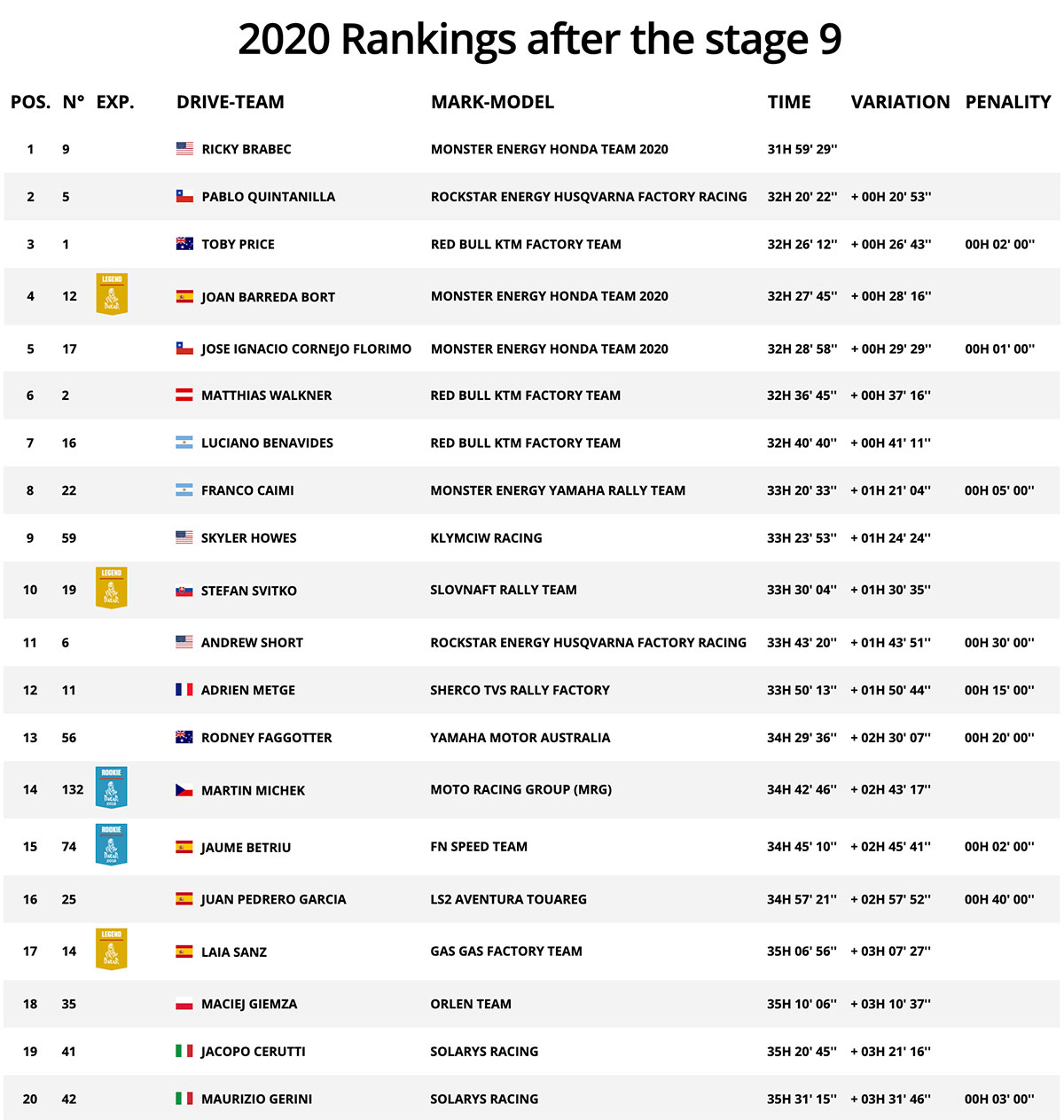