When it comes to the living legends of dirt bike racing in Australia, Craig Dack is as legendary as they come. 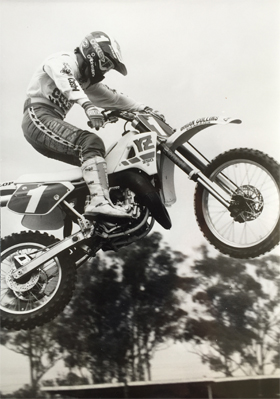 Craig Dack Back In 1988 - Credit: Supplied
The multi-time Mr Motocross and Australian championship winner was a dominant force in dirt bike racing in the late 1980s and early '90s, before retiring and moving into race team management in 1993 and enjoying continued success as owner/manager of the factory-backed CDR Yamaha race team for the past 22 years.

With preparations at full charge for the 2015 Australian Supercross Championship ‰ÛÒ which kicks off at Australia's home of motorsport, Bathurst, NSW, on October 10 ‰ÛÒ Dack is relishing the return of the sport to major stadiums featuring man-made tracks and large and vocal audiences.

In particular Dack can't wait for round three of the national Supercross championship chase, which will descend on Adelaide Showground at Wayville on Saturday night, October 31.

The best part of 30 years ago, the Wayville venue was a happy hunting ground for Dack, who in 1988 was at the peak of his two-wheel powers as the country's top racers journeyed the length and breadth of the land chasing a full calendar of major motocross and supercross events.

"The Wayville Showground will always be a special supercross venue to me," explained Dack, who is now aged 51 and this year helps to guide the fortunes of Kade Mosig, Dan Reardon and Jacob Wright on his CDR Yamaha team.

"I always tell everyone my memory from my racing days is a little foggy now ‰ÛÒ because it was a fair while ago! ‰ÛÒ but I will always remember the Wayville Supercross in 1988. I still get goose-bumps thinking about it because the hype that night was simply over-the-top."

In 1988 Dack was racing for the Brian Collins Yamaha team and when the national supercross circus arrived in the city of churches, the startline included not only a full grid of Australian pro and privateers racers, but a select group of American imports flown in for the one night show.

"The promoters had really pumped the whole Australia versus the USA angle," remembers Dack, "so by the time we got down to the night's racing, the Showground was packed to the rafters with a sell-out crowd of in excess of 10,000 fans.

"With the massive crowd and a huge man-made track laid out on the grassy infield of the showground, all the ingredients were there for a rip-roaring night of supercross ... and that's just what we got."

By the time the main event rolled to the grid, Adelaide's supercross fans had already feasted on spectacular bar-to-bar racing, fireworks, monster trucks and crazy aerial antics over the renowned SA-FM jump, which featured a battery of semi-trailers buried beneath the dirt to give it its massive length.

"Supercross really can get the hairs standing up on the back of your neck," reveals Dack as he looks back on that 1988 Wayville Supercross final.

"Eddie Warren and Jeff Hicks got better starts than me in the final, but over the course of the race, I just kept my head down and chased them hard, to the point where I finally caught up to them by the mid-stages of the race.

"As a I got closer and closer to them, all I could hear was the huge crowd cheering: 'Dacka! Dacka! Dacka!' The atmosphere was electric."

But then, as the trio rounded the turn leading onto the main straight, Dack, while sitting in third, fumbled and crashed.

"It wasn't that big of a crash, but luckily I hung onto the bars and kept the clutch pulled in, so the motor never stalled," Dack remembers.

"I dropped a little ground on the Yanks, but not too much, and there were still a few laps left to run, so I just put the bit between my teeth and went for it!"

Remarkably, Dack made a successful second charge on the much fancied Americans and this time when he latched onto their rear wheels, there were no mistakes.

"I passed them both," Dack smiled, "and then motored away to the win. And all the time the crowd was just going wild and calling out my name."

After the race, Dack was swamped by the patriotic crowd, who had seen their national moto hero come through to win in dramatic fashion.

"It was a really special night," Dack sums up. "Not just for me, but Supercross as a sport.

"It might be nearly 30 years ago, but I still get South Australian race fans who relive that night with me at race events nowadays. That event at the Wayville Supercross in 1988 sure did generate some fabulous memories."

Tickets for round three of the 2015 Australian Supercross Championship at Adelaide Showground, Wayville on October 31 are available now from www.ticketek.com.au