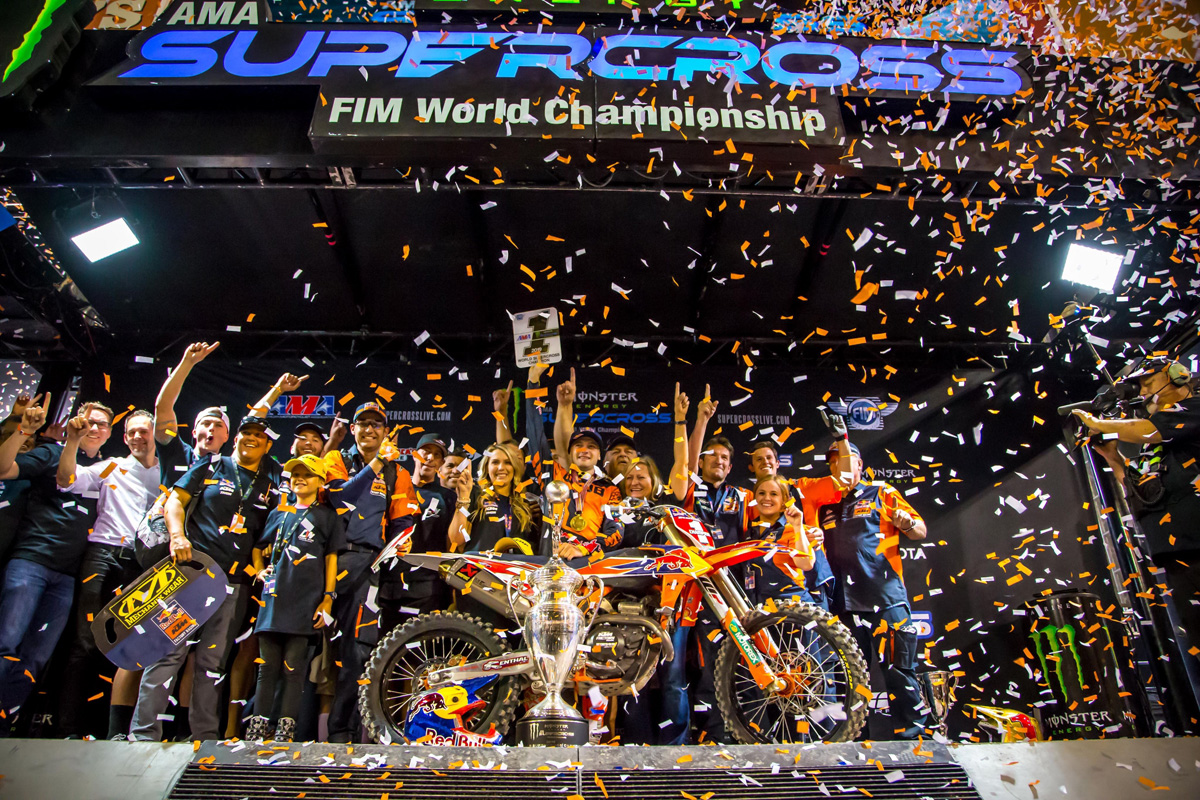 It was a monumental night in Las Vegas for the Red Bull KTM Factory Racing Team as Cooper Webb secured his first-career 450SX Championship at the season finale of the 2019 Monster Energy Supercross Championship.

Webb, a two-time Western Regional 250SX Champion, joined the Red Bull KTM Factory Racing Team at the end of 2018 and the North Carolina native immediately went to work to pair himself with an all-new motorcycle and team.

With 5-10 finishes in the first two rounds, Webb quickly found his stride with the team as he earned his first-career 450SX victory by Round 3. He repeated the win once again at Round 4, before going on to secure a total of seven Main Event victories as he carried great momentum into the final round in Las Vegas.

Coming in with a 23-point margin over Eli Tomac, Webb played it safe at the final round. Qualifying fifth, the newly-crowned 450SX Champion secured the holeshot in his heat and assumed the lead early on. With two laps to go, Webb felt some pressure from Tomac, and he quickly settled into the second-place position, shifting his focus toward the Main Event.

With a solid gate choice for the main, Webb powered into third off the start. From there, he maintained a consistent pace throughout the Main Event to secure a third-place podium finish, behind race winner Eli Tomac and runner up Marvin Musquin en route to securing the prestigious 2019 AMA 450SX Championship.

‰ÛÏIt‰Ûªs been an incredible journey." Webb enthused. "This KTM team believed in me, they took me in and transformed me back to where I always knew I could be.

"This year was not expected at all, and I can‰Ûªt thank them enough for giving me this opportunity to get back into this level and to do it this way is unreal. It‰Ûªs a dream come true; I‰Ûªve had it since I was a little kid. It‰Ûªs an incredible feeling.‰Û 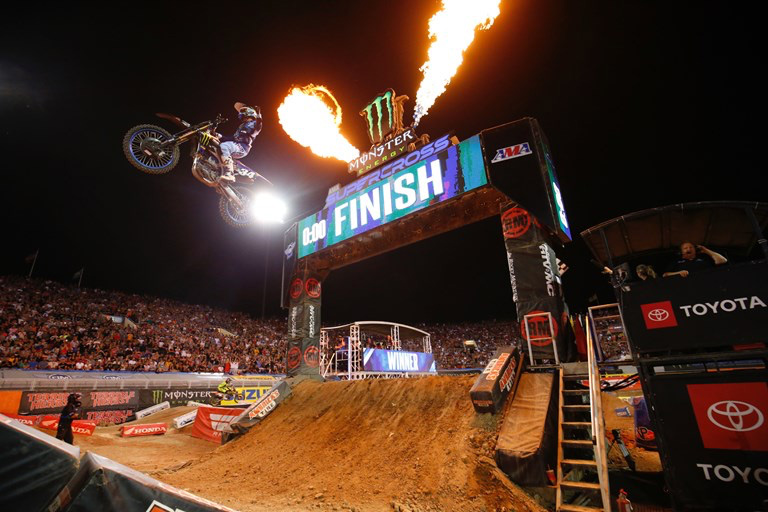 In the 250 ranks, both the East and West coast titles were on the line, with Chase Sexton and Justin Cooper battling it out for the East title, while Adam Cianciarulo and Dylan Ferrandis were set to go head to head for the title in the West.

With all four riders easily qualifying into the nights East v West grand finale, that stage was set for an epic end to the season.

In the battle for the East, it was Sexton who comfortably came away with the title, running near the front of the field from the start of the race, while Cooper battled mid-pack. At the line Sexton cruised through for a fourth-place finish, securing his first 250 championship aboard his Geiko Honda.

While the East title was straight forward, the battle for the West title was a thriller, filled with excitement despite the two riders battling for the title never getting close to each other on track.

Ferrandis launched out of the gate aboard his Monster Energy Yamaha to take control of the race from the start, and with Cianciarulo sitting outside the top five, Ferrandis momentarily held the title in his hands.

Cianciarulo was then able to move forward through the pack, first bringing the points chase back to even, which would secure him the title on countback, then continued to move up through the field and was sitting comfortably in third and looking as though he would break through for his maiden 250 title.

However, it was not to be, with the Pro Circuit, Monster Energy Kawasaki racer making a costly mistake, coming up short in a rhythm section and crashing. While he was able to get to his feet quickly, his bike was badly bent up, and though he was able to continue in the race, he was only able to salvage 20th position.

Up front Ferrandis lived out the perfect night, taking a comfortable race win with the French racer celebrating his first championship in the U.S

‰ÛÏComing into the main, I just asked my mechanic to tell me what Adam was doing and when I saw it at P-10 and P-12, I couldn‰Ûªt believe it." Ferrandis said.

"We trained so hard coming into this weekend. It‰Ûªs more than a dream come true. It‰Ûªs hard to put into words. I‰Ûªm just thinking about all the people that have been with me and supporting me. The team has been behind me the past few years, and I‰Ûªm very grateful to them for believing in me. This is incredible.‰Û