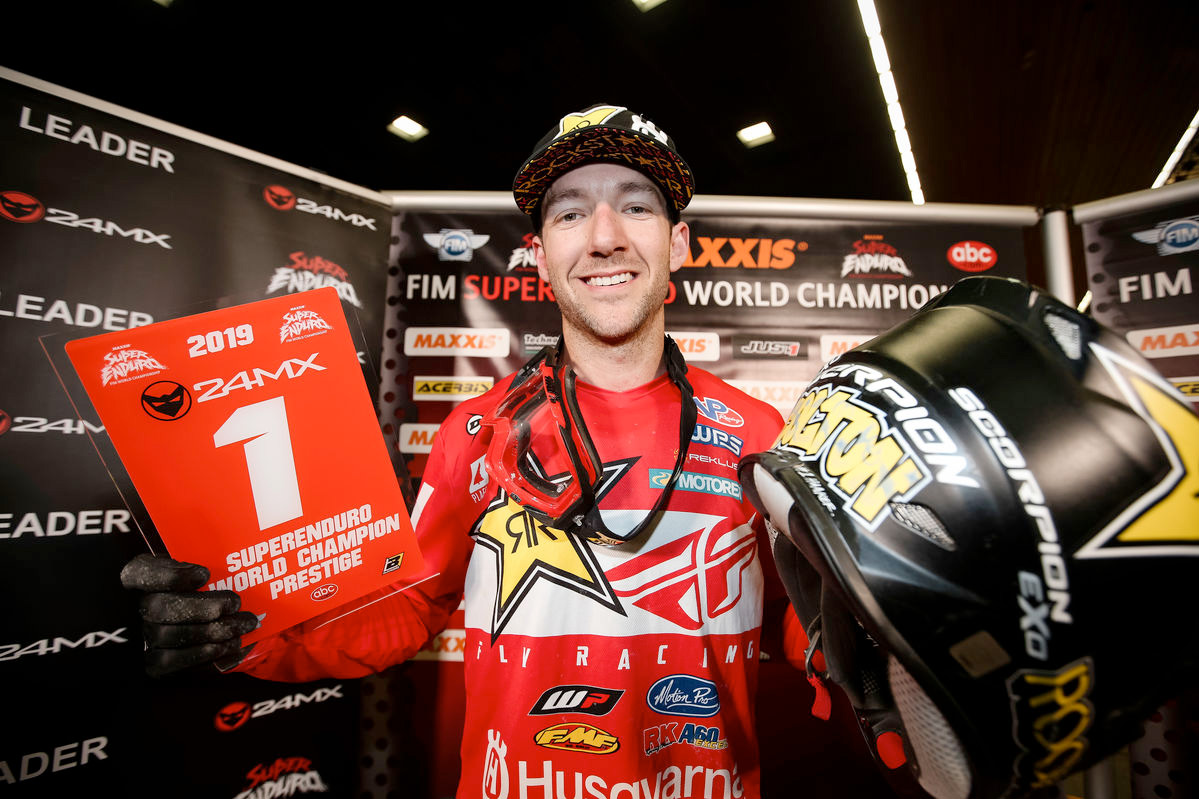 Securing his third world crown, Rockstar Energy Husqvarna Factory Racing‰Ûªs Colton Haaker has won the 2019 FIM SuperEnduro World Championship at the fifth and final round of the series in Bilbao, Spain. Photo: Future7Media
Coming into the season finale in the Bizkaia Arena, Bilbao, there were three riders all mathematically capable of becoming 2019 Maxxis FIM World SuperEnduro Champion.

The show lived up to all expectations, and rewarded fans with thrilling drama from start to finish.

California's Colton Haaker took the 3rd World Champion title of his career, although the factory Husqvarna rider had to wait for the last race until he could grab the title which he felt belonged to him.

The road to the crown was full of pitfalls. From the first race, the American found himself in difficulty, hitting one of the first obstacles on the Basque track. Making mistake after mistake, Haaker appeared to have crumbled under the pressure. However, he was handed a life line when this first race was red-flagged due to track conditions.


Whilst the organisers tried to repair the damage caused by the passage of so many bikes, Colton had time to try and gather his thoughts and calm down. However, in the race one restart he failed to keep up with his compatriot, Cody Webb who seemed unbeatable out of the gate - winning ahead of Taddy Blazusiak and Haaker. After this dramatic opening race just 6 points separated Haaker from Webb.

The second race was to play a significant role in the outcome of the evening, especially with its traditional 'reverse grid' start. Colton Haaker wasn't hanging around and he took the lead after 3 laps, he then managed to control the chasing pack for the entire race. Meanwhile, Cody Webb made a small mistake which saw him lose contact with the Husqvarna rider. With this latest victory Haaker took a tiny three point advantage over his biggest rival, Webb. 3rd in the second race of the night was SuperEnduro showman, Taddy Blazusiak, who was forced to accept that a 7th World SuperEnduro title had now slipped from his grasp. It was going to be between Haaker and Webb to fight it out for the 2019 crown. 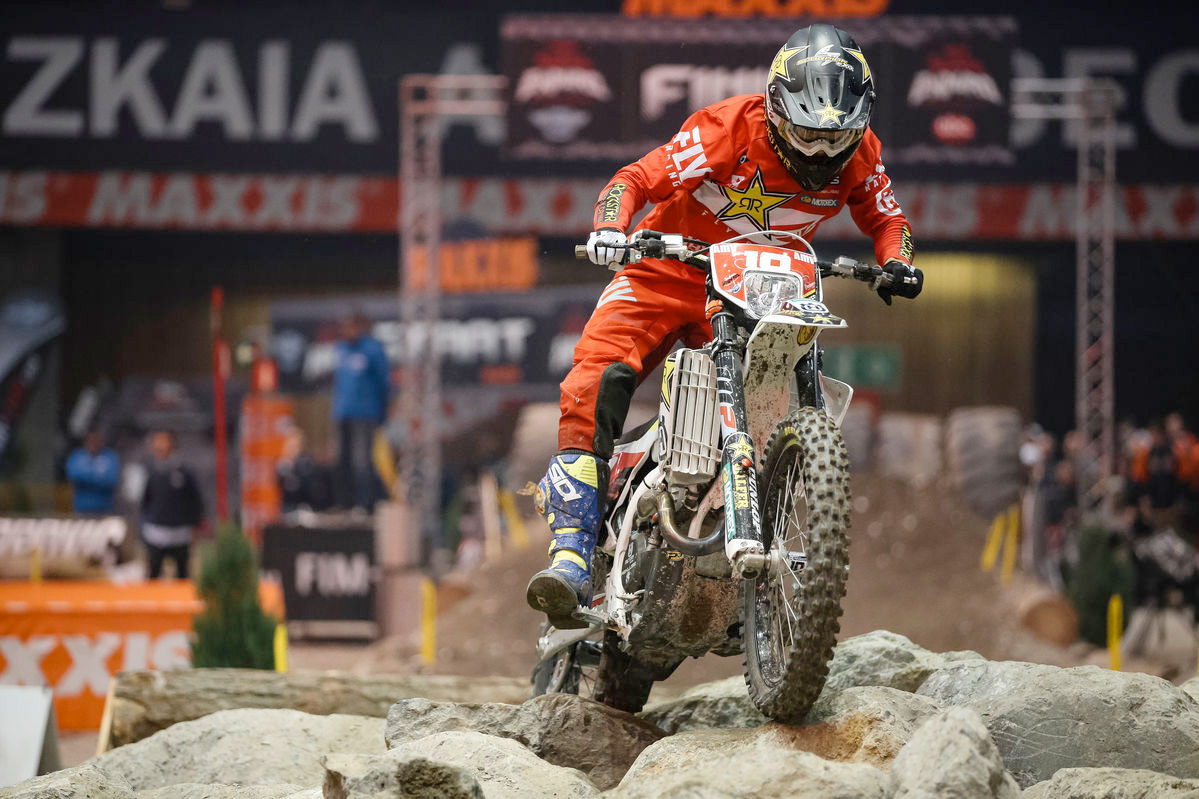 Entering the closing round of the series as the championship leader, Haaker held a 12-point advantage over his closest rival Cody Webb with just three races, and superpole for the fastest qualifier, remaining in the 2019 championship. Photo: Future7Media
Once again the Maxxis FIM SuperEnduro World Champion was to be decided in the final seconds of the final race, making for a super exciting end to the 2019 season. Cody Webb was fastest out of the gate, snatching the holeshot from Blazusiak and leading the first laps of the race. Haaker momentarily lost his concentration and made a small mistake in the rock garden. The Husqvarna rider nevertheless managed to maintain good pace and he focused on the title again. In second position Taddy Blazusiak had a strong race but the Pole couldn't quite keep up with his KTM teammate, Webb.

A few corners from the end of the race, with Webb on course to win his second race of the night, Haaker made another mistake and lost some positions. Webb would therefore have enough points to win the 2019 title. But it turned out that Alfredo Gomez, the teammate of Haaker, was going to play a considerable role in the outcome of this season. The Spanish rider, playing to team orders allowed Colton Haaker to finish third in the final and helped him to snatch the Maxxis FIM SuperEnduro World Championship title he had worked hard for all year. 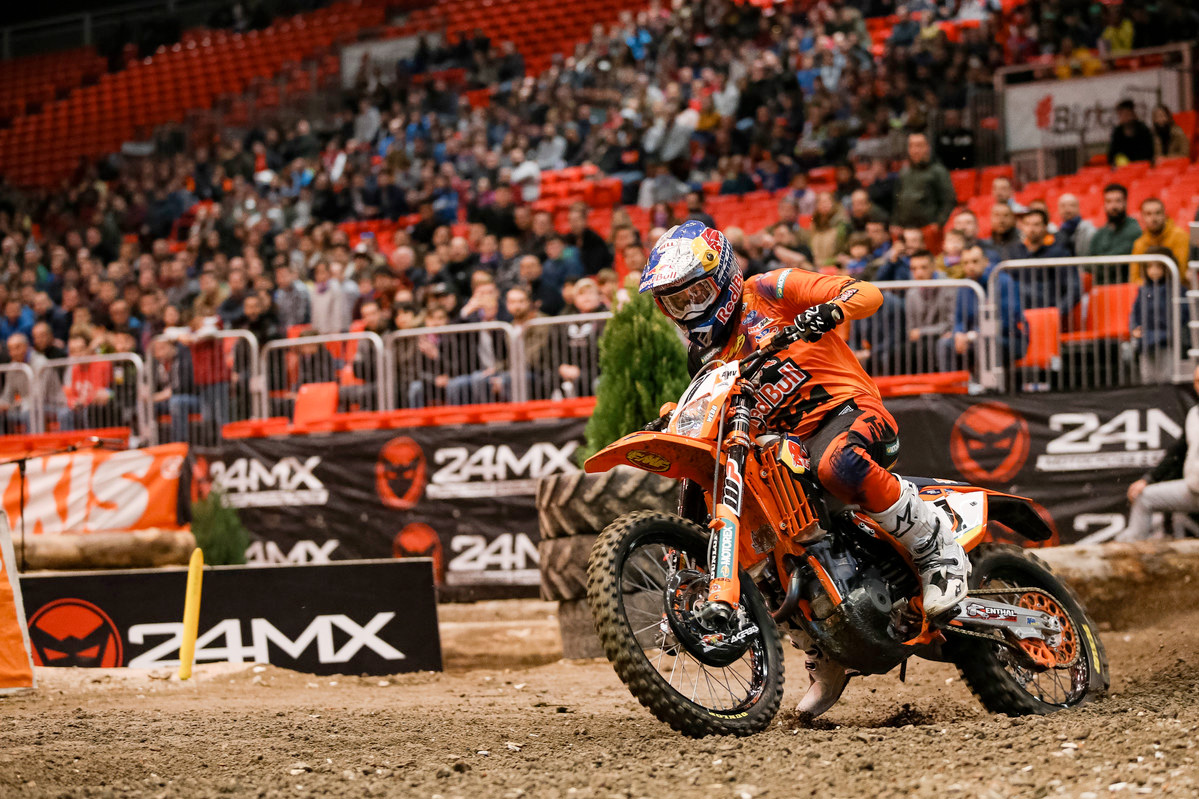 Defending champion Cody Webb won the dramatic final round of the 2019 FIM SuperEnduro World Championship but it was enough to deny Haaker the championship victory for 2019. Photo: Future7Media
Gomez was later disqualified for this action, although it was not explicitly against the rules. In a final shocking twist, Haaker suffered a huge crash over the finish line and lost consciousness, waking up to find his team around him, congratulating him.

This somewhat controversial end to the evening does not bring into question the impressive season put together by Haaker, who has been performing well and riding consistently since the start of the season. Colton Haaker was therefore crowned 2019 Champion by a small but crucial gap of 4 points in front of Webb and Blazusiak.

‰ÛÏI‰Ûªm a little bit lost for words right now, it‰Ûªs been an eventful night but to end it as the world champion is an incredible feeling," Haaker said after the final razce.

"I can‰Ûªt thank the guys at Husqvarna enough for the support they‰Ûªve given me, not just tonight but throughout the entire series. This title is very much a team effort as it is mine. Tonight was tough. I‰Ûªm not quite sure yet what it was but it certainly wasn‰Ûªt my best night on a bike. The track wasn‰Ûªt good and I had some serious arm pump issues, which is something I never really get. I made so many mistakes in race one and was riding too tight. Then I got it together in race two and felt more like I should.

"It was all on the line for the final and I did what I needed to do on the first few laps. But then the arm pump kicked in again and I stalled my bike so many times. With about a lap to go I got things together again and put everything I had left into that lap and won the title. It wasn‰Ûªt pretty, but it doesn‰Ûªt matter, we‰Ûªre world champions and it feels awesome," he concluded.

Webb was obviously disappointed not to retain his title and felt the championship should have been his after the controversial night.

‰ÛÏObviously I‰Ûªm disappointed with the final championship result tonight, I felt I rode really good out there today and deserved the title," Webb lamented. "The night started off well with a good time in superpole and then in the restarted first final I took my time, rode smooth and took the win by a good margin. I am kicking myself now for the mistakes I made in the second final, I got caught up in traffic a few times, but still got second ‰ÛÒ I knew then I would have to really go for it in the last one. I got off the line well in the third final and set about catching Colton. After I got past him, I just stayed smooth and could see he was struggling. I‰Ûªm happy because I did my best, won that third final and believe the championship should have been mine. It‰Ûªs a bitter pill to swallow, but I‰Ûªll learn from it, and come back even stronger next time.‰Û 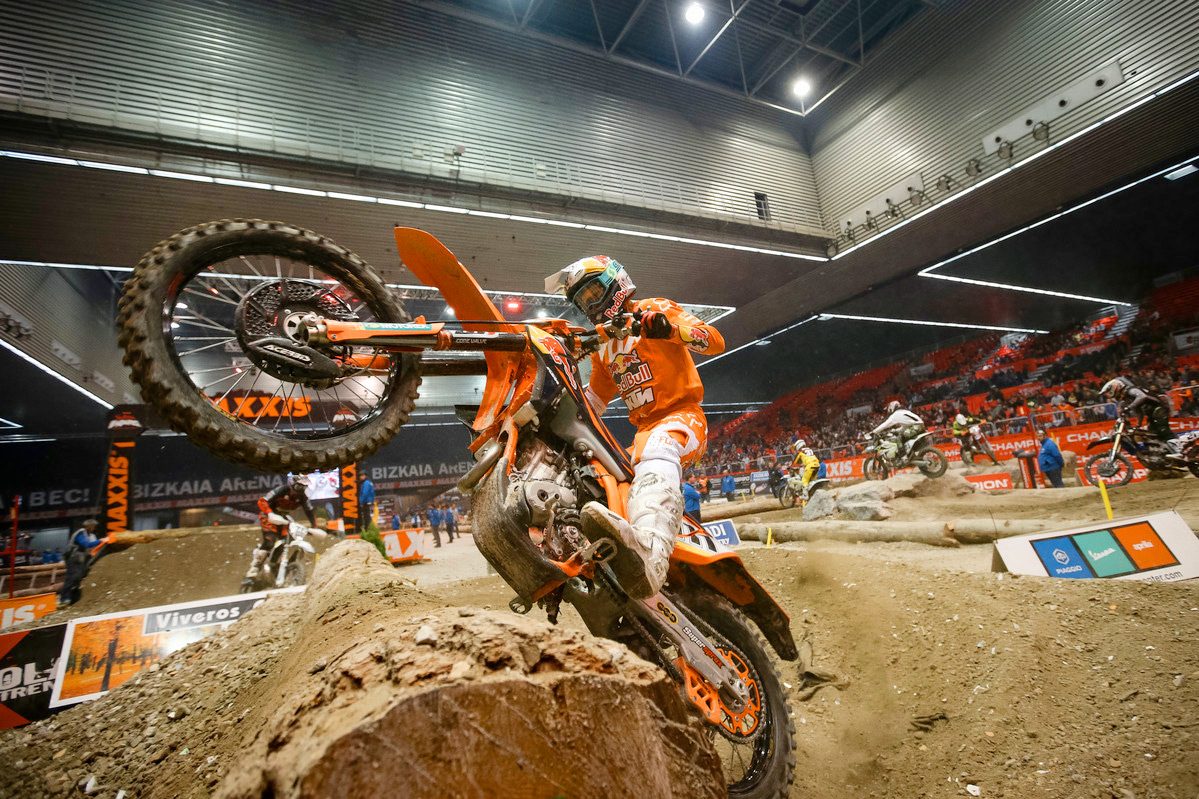