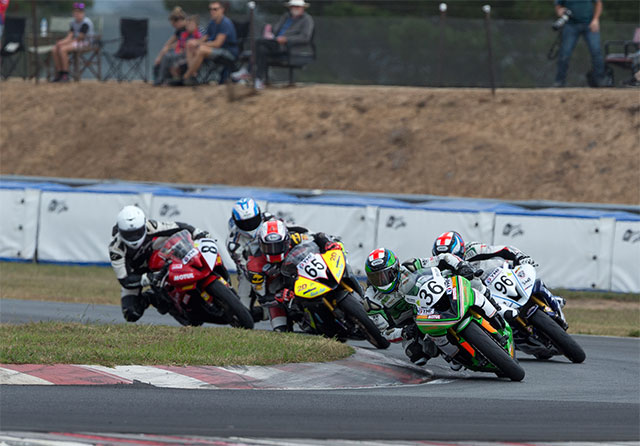 Sam Clarke has gone undefeated at Round 2 of the Yamaha Motor Finance Australian Superbike Championship presented by Motul Pirelli at Wakefield Park today, with the Motul Supersport class dishing out the excitement across two races.

After a brief warm up this morning, it was straight into race one for the Motul Supersport competitors, and with fans eager to see the Wakefield track come to life, spectators dotted the fence line to cheer on the class.

Kawasaki mounted Clarke had the advantage of Pole position this morning, so when bikes screamed off the full grid and into turn one, all eyes were on his Banham WA Racing machine. Clarke rose to the occasion, getting the perfect jump, and moving in to a comfortable race lead.

With a total of 16 laps to get the job done, Clarke pulled away from the field ahead of JNL Racing‰Ûªs Luke Mitchell in second - series points leader Troy Guenther found himself in third (Graffiti Alley Racing), while Cambridge Olivier and Chris Quinn rounded out the top five.

With Clarke, Mitchell and Guenther out in front, the battle for fourth, fifth and sixth intensified ‰ÛÒ Yamaha mounted Ben Blyth making his presence known, securing a move on Olivier to snatch up fourth position behind Guenther.

By lap five, Western Australian Clarke looked untouchable out in front, he continued to maintain a healthy race lead, ahead of Mitchell and Guenther who also had a comfortable gap on the field, in second and third.

However, Mitchell was not ready to settle for second position - by lap seven the Yamaha rider had put the fastest time on the board, finding the rear wheel of race leader Clarke, setting up a battle for the Motul Supersport race one win.

By the time the race reached lap ten, there were battles for positions left, right, and centre, and with the leaders well and truly into lapped traffic, the back markers added an additional element to the 16 lap race.

With five laps remaining, the running order saw Clarke out in front, holding off a hard charging Mitchell and Guenther who were in second and third ‰ÛÒ Callum Spriggs had also found his way in to fourth position, followed by Blyth, Olivier, Guiseppe Scarcella and Ted Collins.

And it was on lap 14 that the Motul Supersport class came to a dramatic early finish - Mitchell snatching up the lead, only to have the race red flagged when a rider crashed at the exit of turn one.

The first Motul Supersport race was then declared at the 13 lap mark, meaning Clarke was awarded the race one win, ahead of Mitchell in second, Guenther in third, while Spriggs, and Blyth rounded up the top five. Olivier concluded the race in sixth position, followed by Scarcella, Collins, Robbie Menzies and Mark Chiodo who all finished in the top ten.

By the time race two got underway this afternoon, the Wakefield Park circuit had heated up, and the Motul Supersport class took advantage of the weather by putting on one last performance for spectators.

When bikes left the grid for the final time this afternoon, the battle was on, but it was Clarke who edged out his competitors, and emerged from turn one with the race lead.

With one lap in the books of the 16 lap race, the running order saw Clarke out in front, ahead of Mitchell in second, followed by Guenther in third.

With four laps in the books, there was no change in the race order, Clarke managing to hold off Mitchell in second and Guenther in third, while Olivier and Spriggs rounded out the top five.

When the riders reached lap ten, there was a challenge for the lead, Clarke with his hands full, trying to keep Mitchell‰Ûªs Yamaha machine at bay, all the while Mitchell was also under fire from Guenther, Olivier and Kawasaki mounted Spriggs.

On lap 12, fans were treated to a total of four changes to the lead, with Mitchell heading into lap 13 as the new race leader, ahead of Clarke who was relegated to second, while Guenther managed to maintain third.

And in the closing stages of the race it was anyone‰Ûªs guess who would take the chequered flag first, both Mitchell and Clarke putting on a classy performance, the pair drag racing down the final straight ‰ÛÒ Clarke eventually putting his front wheel over the finish line first, while Mitchell was forced to finish second, followed by Guenther who wrapped up the final Motul Supersport race for the day in third.

Local Olivier finished the second Supersport race in fourth, ahead of Spriggs in fifth, followed by Blyth, Scarcella, Chiodo, Quinn and Ted Collins who all wrapped up the top ten respectively.

When the round two points were tallied, it was Clarke‰Ûªs flawless performance which saw him take the Supersport honours at Wakefield Park, followed by Mitchell in second, and Guenther in third, completing the round two podium.

An elated Clarke spoke after taking the final race win, sharing what the round two win meant to himself and his dedicated supporters.

‰ÛÏWe are absolutely stoked to finish round two on the podium, and it‰Ûªs awesome to be able to reward my sponsors with two race wins and an overall podium,‰Û