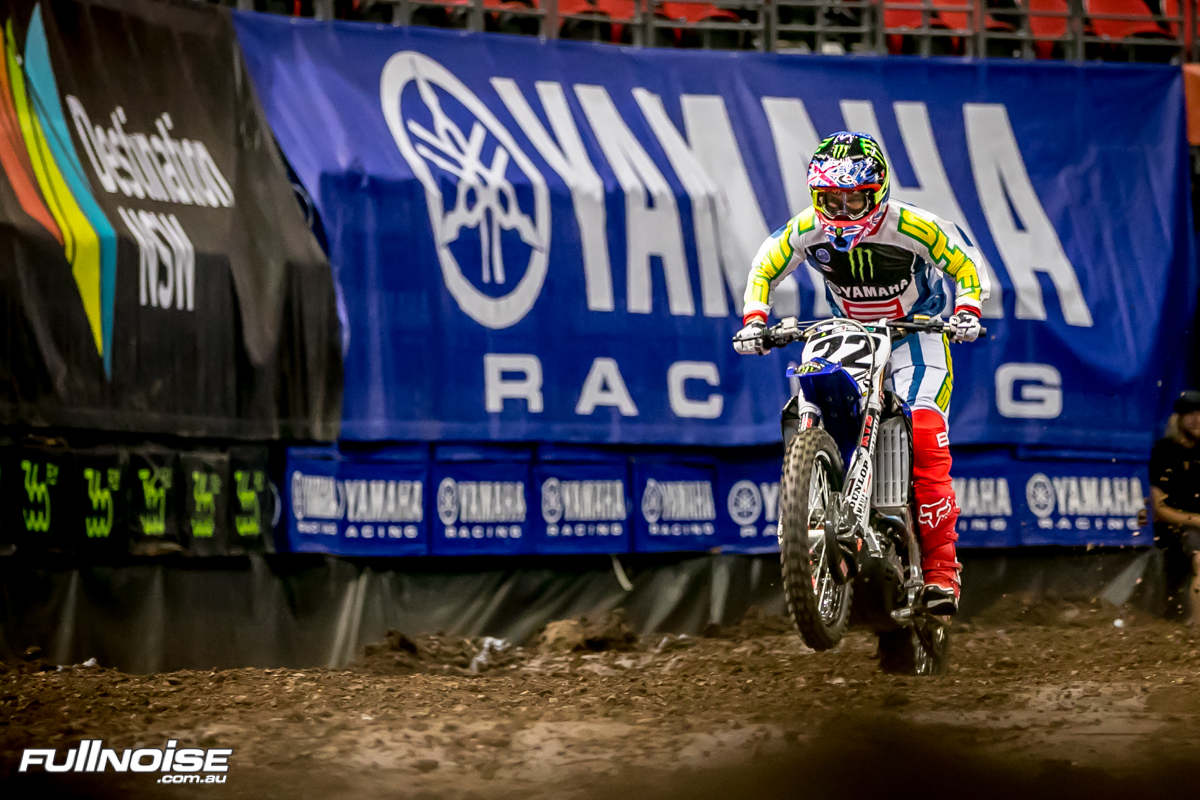 While Reed and Faith celebrated their round wins, it was HGA Honda's Justin Brayton who left the night with the biggest smile of all clinching the 2016 Australian Supercross Champoinship with his second place result.

The SX2 championship will go down to the final afternoon of racing tomorrow with Jackson Richardson trailing Hayden Mellross by just six points after Richardson finished second to Faith, with Mellross just one position behind.

Read below for a live blow by blow account of the evenings racing.
SX1 Main Event:

12 SX1 riders took to the start gate for the nights big main event.

When the gates dropped it was Ryan Villopoto and Justin Brayton who crossed the line side by side with Chad Reed in third.

Villopoto then lost two more positions to Marmont and Mosig as Kyle Peters crashed at the end of the whoops on lap one.

Brayton continued to lead at the end of lap three as the shannons short cut lane opened with Brayton electing to take the shortcut on straight away to try and build his lead.

Behind him Cooper Webb made his way in to 5th place passing Villopoto.

With a quarter of the race ran it was Brayton and Reed opening up a big gap up front, Marmont held down third from Mosig and fast closing Webb. Villopooto was 6th followed by Reardon who passed the Kawasaki rider via the short cut lane.

By lap seven Webb moved into fourth position and went straight after Marmont for third.

Wil Hahn crashed hard in the whoops on lap eight while Reed closed in on Brayton still not having used the short cut lane.

At the start of lap eleven, Chad Reed made his move taking the short cut and came in at Brayton.

Brayton held his nerve railing around the outside of Reed to maintain the race lead, while Marmont continued to hold off Webb for third.

Villopoto was the next to use the short cut lane as he looked for a move past Mosig for 5th as the retired rider started to look stronger in the second half of the lap. The move did not come off and hie maintained 6th just ahead of Reardon and Ferris.

On lap 15 of 20 Brayton was leading as they hit lap traffic, crossing the finish line Brayton spun the back wheel up exiting the first turn, allowing Reed to swoop in and steal away the lead.

With two laps to go Maroni continued to hold third ahead of Webb though both riders were half a lap down on race leader Reed.

In a battle for near last Waters and Alldredge came tother with both riders going down.

Chad Reed lit the candles to take the race win from Brayton, while Marmont bought the crowd to their feet holding off Webbs last turn challenge to score the final spot on the podium.

Braytons second place finish was enough for him to seal the 2016 Australian Supercross Championship.

With 12 riders taking to the gate for the SX2 main event, the field was double stacked with Kale Makeham and Jesse Madden starting behind the top ten qualifiers.

When the gate dropped it was Gavin Faith who claimed the holeshot ahead of Nathan Crawford and Jackson Richardson.

Championship leader Hayden Mellross got a bad jump made it work in the first turn picking up places then bobbled again.

At the start of lap two Richardson moved by Crawford for second position as the Shannons short cut lane opened up.

Mellross then used the short cut lane to start lap four and made the move to past Crawford into third.

Crawford used the same lane a lap later but was unable to make the move back.

By the start of lap seven things had started to settle down with Faith holding a comfortable lead over Richardson and a closing Mellross.

Behind the leaders Crawford was coming under pressure from Todd for 4th.

Madden at the end of lap nine jumped off the side of the finish line double, completely missing the down ramp and bouncing into the start of the whoop section where race leader Faith just missed him.

Madden was able to get back to his feet and re enter the race!

With three laps to go Mellross moved right on to the back of Richardson rear wheel as the championship points leaders looked to resume their battle.

Crawford re asserted his position in 4th opening up a gap over Todd in 5th.

With two laps to run Mellross made his move, taking aim at Richardson. front wheel, both riders nearly went down, with Richardson coming out of the situation the best and opening up his gap in second.

Faith finished the race with a comfortable win with Richardson closing in the championship points gap to just six finishing in second ahead of Mellross. 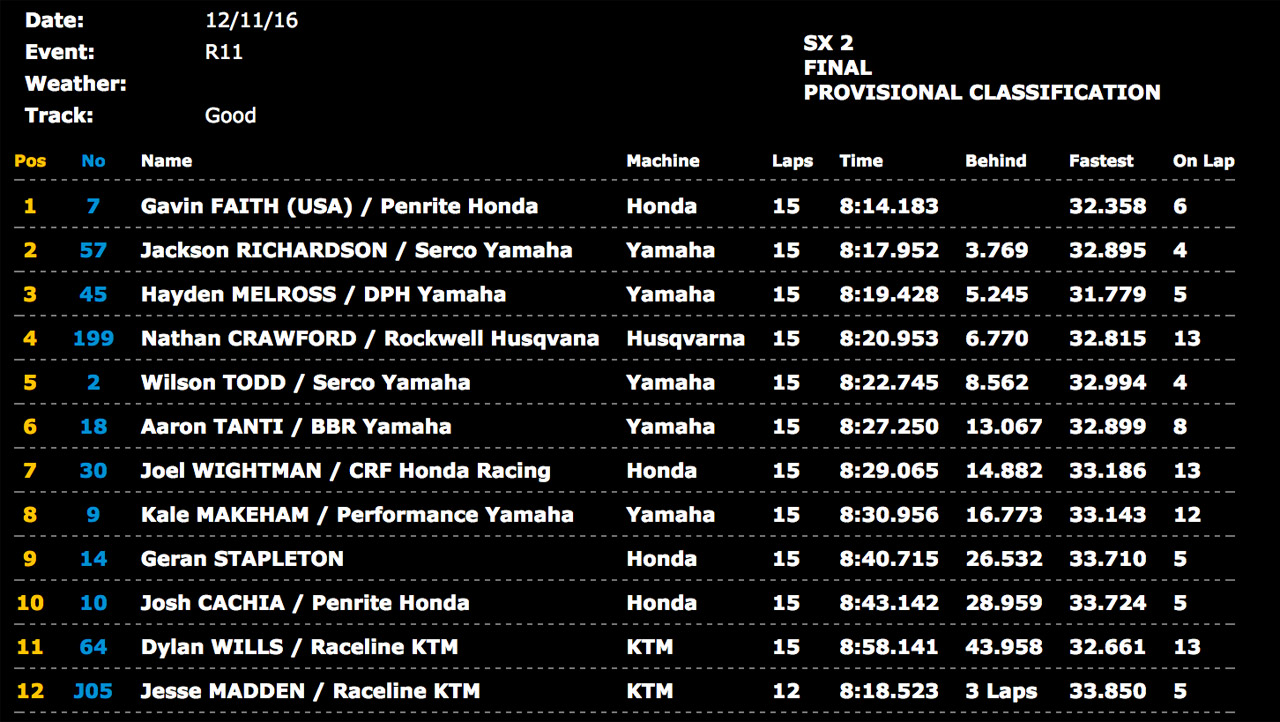 Marmont edged out Bopping for second heading into the sand section for the first time with Bopping crashing not long after putting him out of contention.

At the half way mark Reardon had a comfortable lead while Marmont was holding firm in second ahead of Alldredge and Cheyne Boyd.

Cooper Webb, Kade Mosig and Luke Wilson were side by side for the holeshot, with Wilson losing the front end and crashing.

Webb claimed the lead early from Mosig into second with Jay Wilson and Todd Waters fighting over 3rd.

ON the start of lap four Waters made the move by Wilson for third as they entered the corner after the finish line double.

Out front Webb was never challenged taking the win from Mosig and Waters leaving the rest of the field from 4th down to head to the LCQ.

Dean Ferris was a noticeable absence from the Semi final races after his heat crash.

In the one lap individual dash for Superpole it was Justin Brayton taking the win with a lap time of 30.666 seconds.

Hahn holeshot from Ferris with Dobson holding down third.

In a straight forward race the top three remained unchanged meaning Hahn and Ferris move on to the main.

Robbie Marshall thrilled the crowd back flipping the finish line once again after doing likewise at the 2015 event. 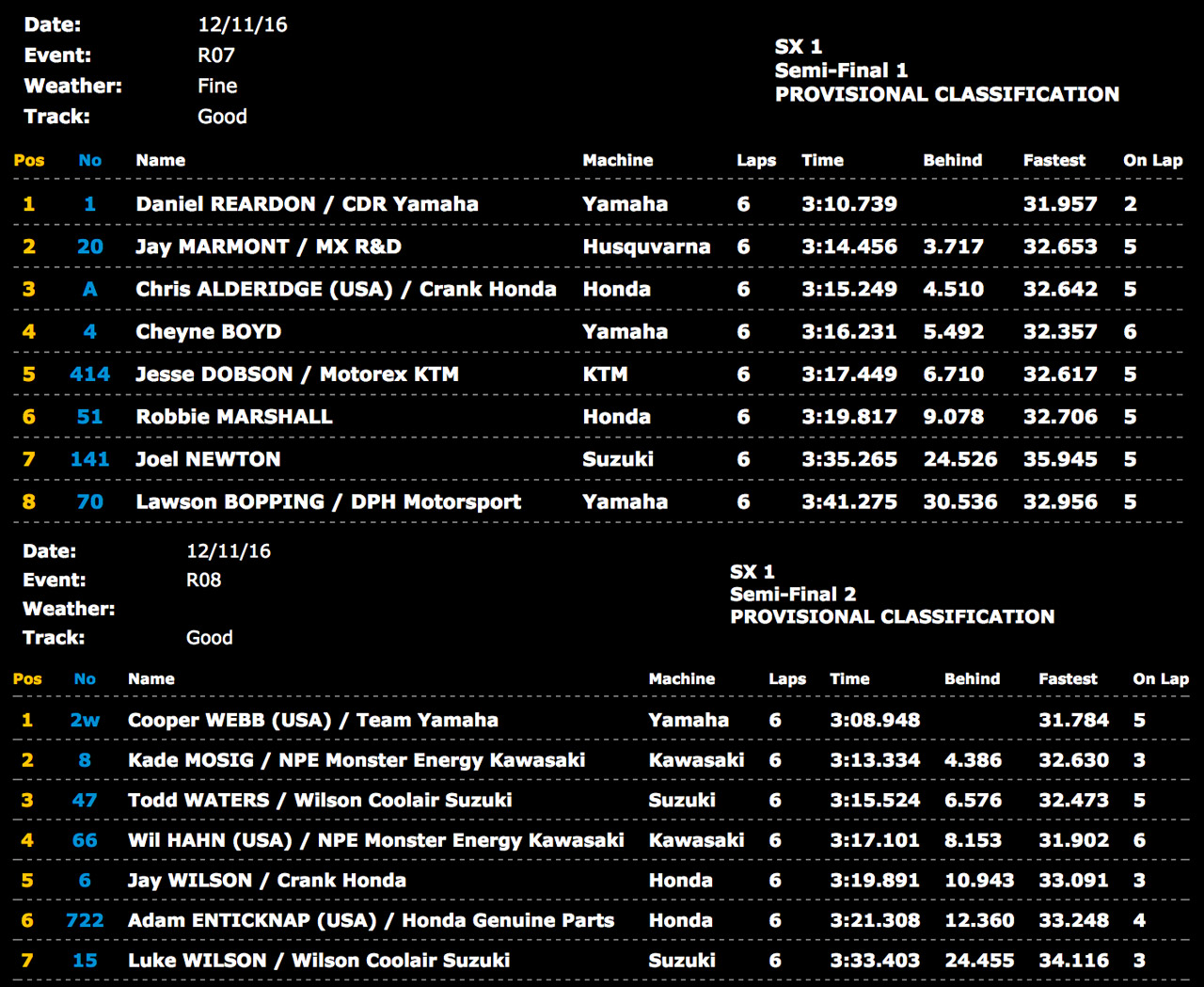 Aaron Tanti laid in third place with the CRF honda duo of Wightman and Webster behind them.

Barham on lap three crashed by himself handing Wills the lead.

Makeham got loose on lap 5 after the triple and crashed hard into the wall though was able to get up straight away.

Out front Wills held on to win from Tanti.

In a replay of their heat race, Wightman and Webster clashed in the final corner with Webster again coming off second best with Wightman going on to take the last spot out of the semi into the main.

Stapleton passed Woods for second while Mellross looked for a way past both them.

Ravenhorst then made the move by Mellross, though Mellross was able to get him straight back.

Mellross put a hit on Woods as he went for the move into 3rd then made the move down the next straight.

Wilson Todd held on for the win with Stapleton in 2nd and Mellross in 3rd leaving him to move dircetly into the main.

Barham grabbed the holeshot from Jesse Madden, while Woods, Dale and Webster crashed in the first turn.

Madden took control of the race lead with Ravenhorst the rider looking to challenge before he crashed heavily in the whoops. 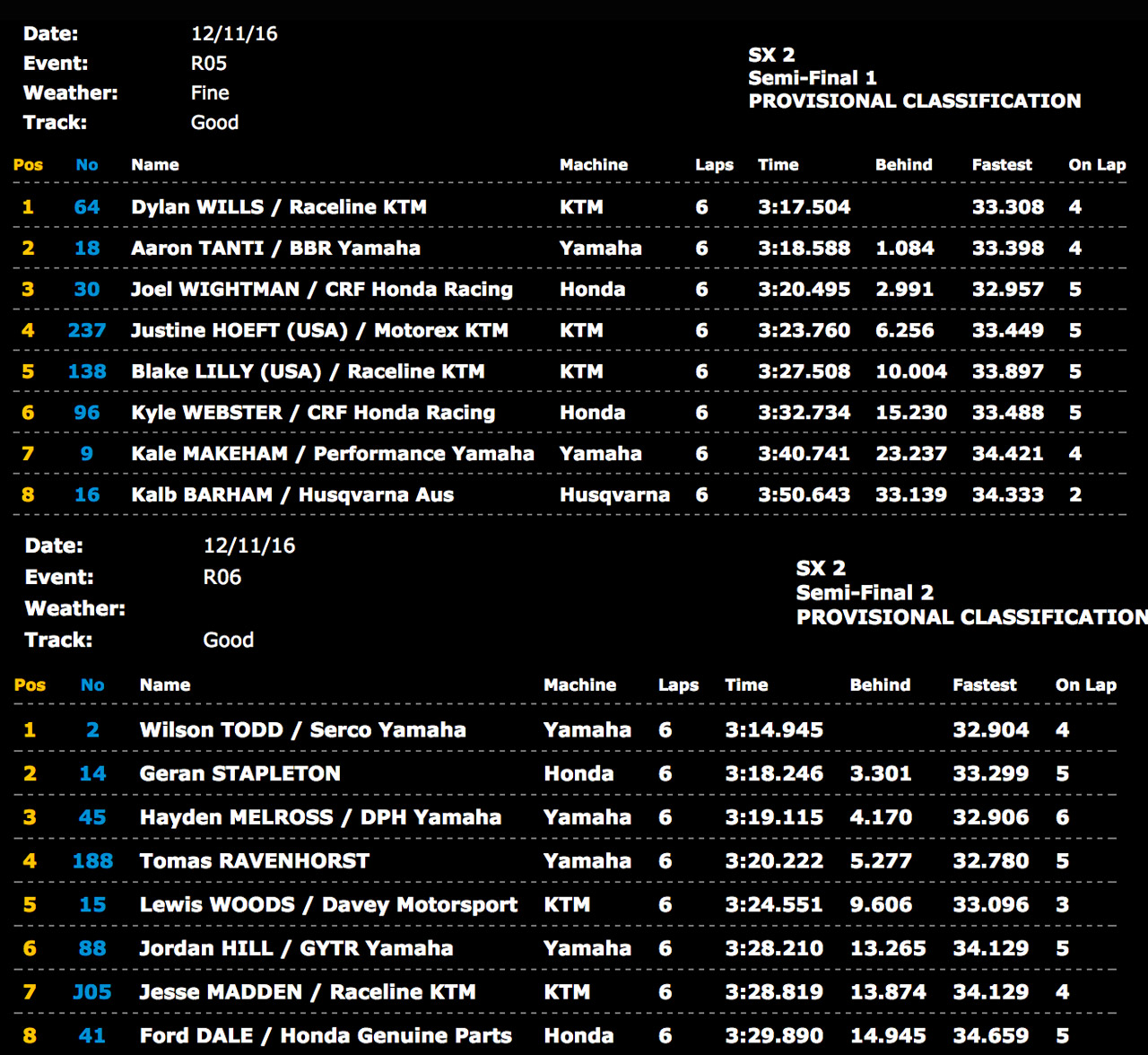 KTM‰Ûªs Kyle Peters snared the Holeshot ahead of Ryan Villopoto, with Lawson Bopping also in the mix.

CDR Yamaha‰Ûªs Daniel Reardon was left deep in the field out of turn one.

Villopoto tried to make a move for the lead at the end of the whoops on lap two coming up just short before making the pass over Peters in the next corner after landing from the finish line double.

Behind them KTM‰Ûªs Jesse Dobson crashed from third, leaving Husqvarna‰Ûªs Jay Marmont to move up with Bopping all over him in 4th and Reardon closing in holding down 5th.

Reardon then moved Bopping out the way for fourth place and went to work on passing Marmont.

Back out front Villopoto moved clear for a comfortable win from Peters and at the line Marmot held on for third.

Chad Reed blew out of the gates to claim a massive holeshot over Ferris. with Mosig in third and Webb in 4th

On lap two Webb fired past Mosig through the whoops to move into third.

Meanwhile Will Hahn was buried at the back with Adam Enticknap.

Brayton moved his way up to 4th , passing Mosig

On lap six something happened between Hahn and Luke Wilson was not at the back of the field with Hahn brake checking Wilson as he passed him leaving Wilson to hit the deck.

As Wilson re entered the race all hell broke out behind him heading into the tunnel with Ferris and Webb coming together crashing on the entrance to the sand section.

The commotion left Reed to take a comfortable win from Justin Brayton who took full advantage of the downed riders in front of him.

Mosig crossed the line in third. 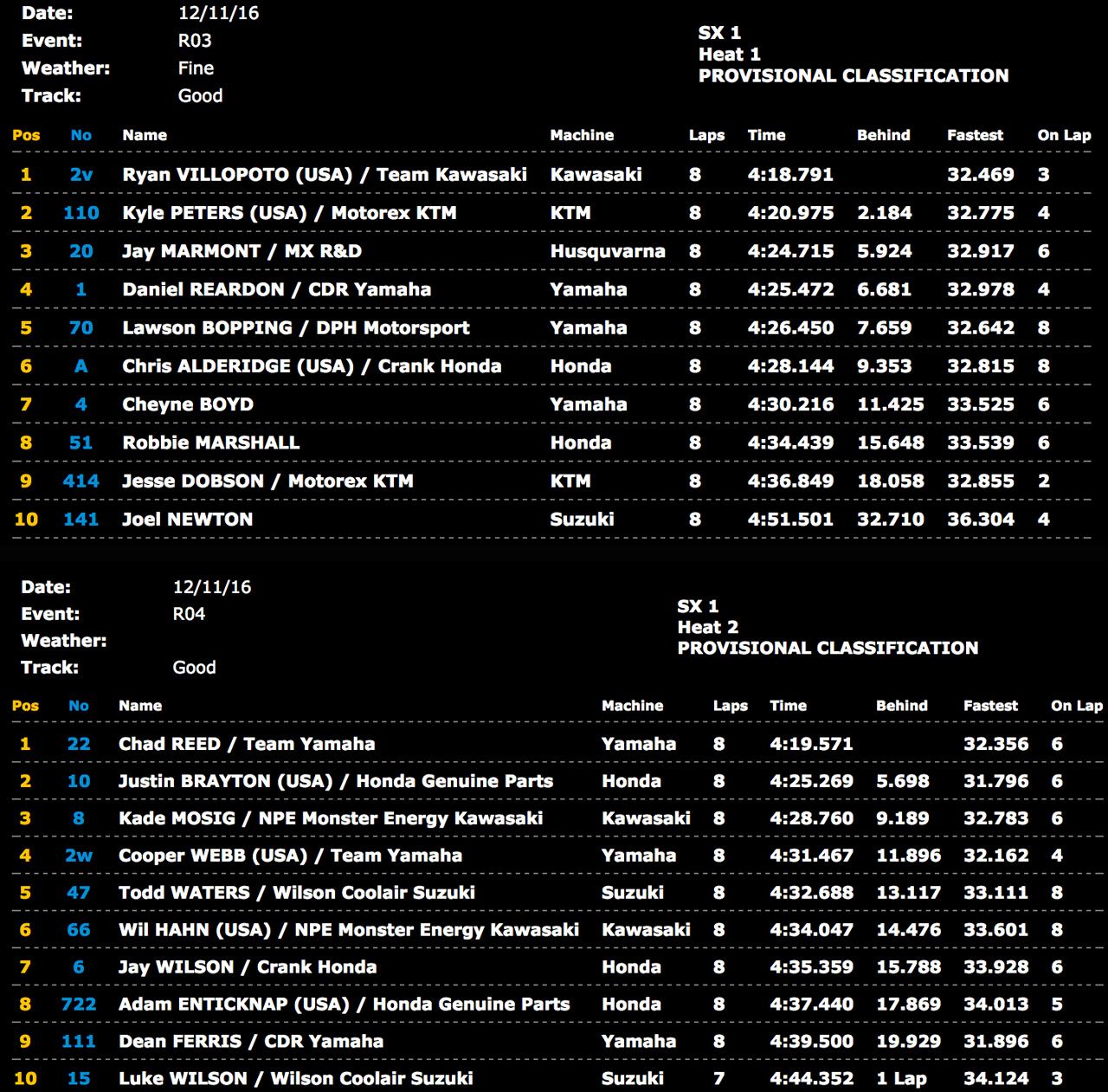 Husqvarna‰Ûªs Nathan Crawford grabbed the Holeshot just ahead of Kaleb Barham and lead the opening lap.

CRF Honda‰Ûªs Wightman and Webster come together at the end of lap one, Webster went down leaving the door open for Serco Yamaha‰Ûªs Jackson Richardson to move into third behind Wightman.

In heat two it was Penrite Honda‰Ûªs Gavin Faith claiming the holeshot from Davey Motorsports KTM rider, Lewis Woods before Woods crashed in the tunnel

The other big news was championship leader Hayden Mellross going down in turn one.

Faith took the win from Cachia, with Maddern in 3rd. 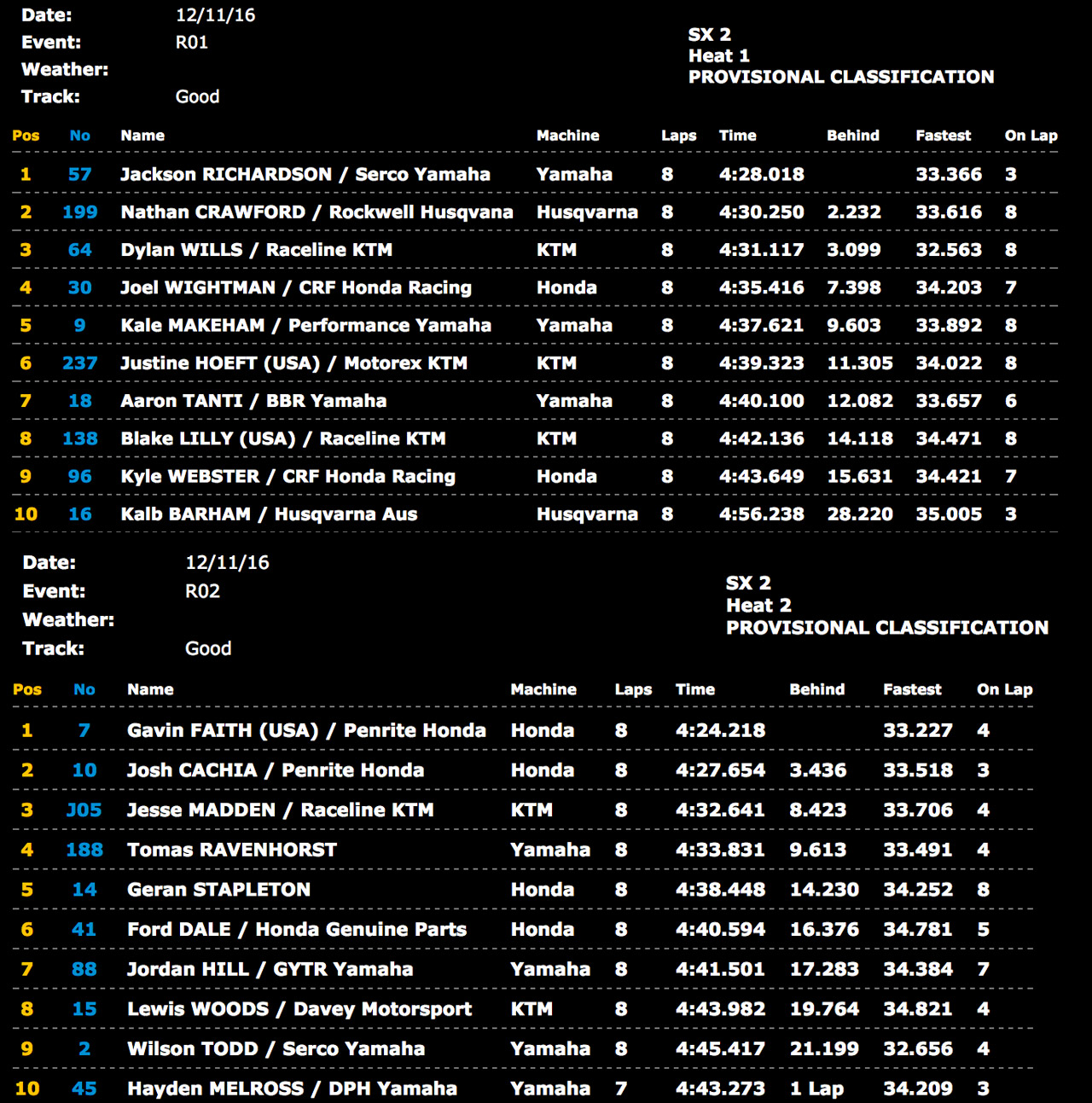 Factory Yamaha‰Ûªs Chad Reed lead the way early before CDR Yamaha‰Ûªs Daniel Reardon proved that despite his high odd for the win, he could be the one to watch as he set the fastest time.

However with just moments remaining in the session it was Reeds new Yamaha team-mate Cooper Webb who topped the charts with a lap time of 30.933 seconds.

Reardon was able to improve his time to a 30.975 as he became the only rider along with Webb to break the 31 second mark.

Reed finished the session in third, with a 31.237, while Monster Energy Kawasaki‰Ûªs Ryan Villopoto was just a fraction of second further back in 4th.

Bopping has a small off at the end of the rhythm section heading into the tunnel, while James Allen crashed on the finish line double, both riders got up and will be fine for tonights racing. 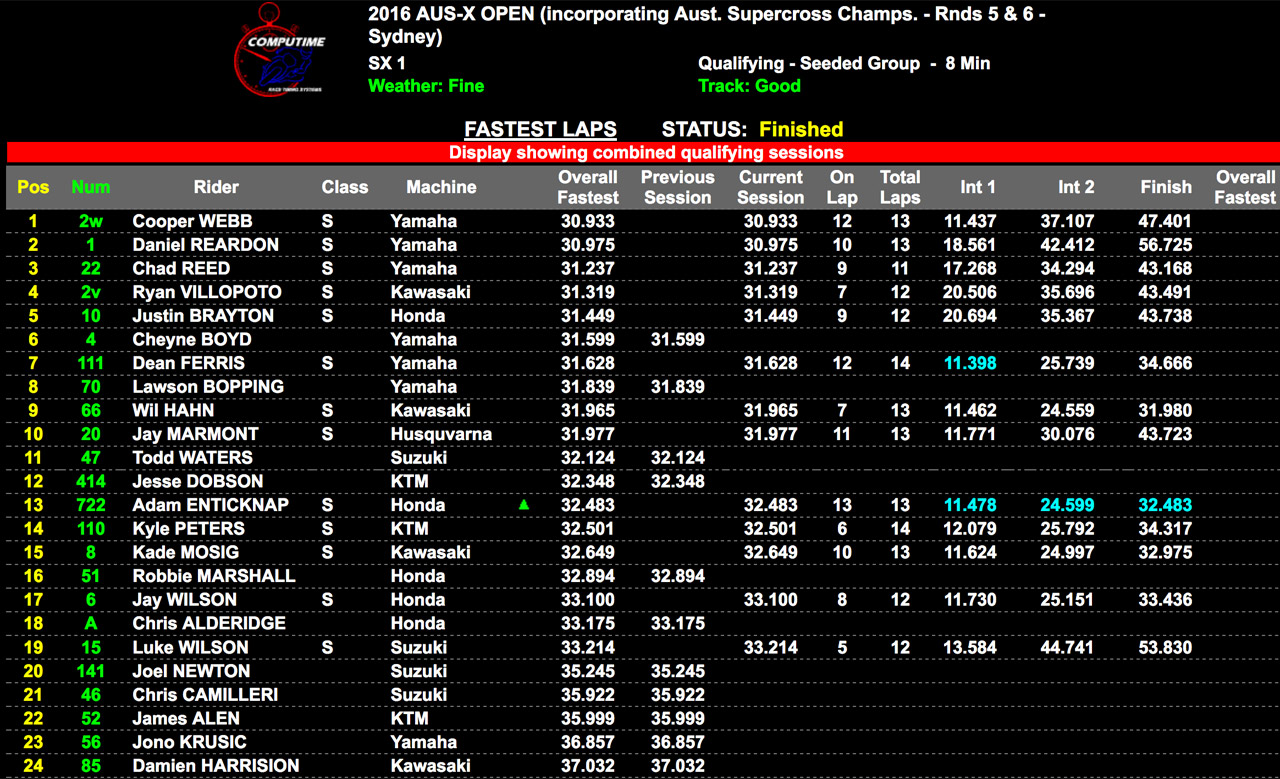 It was another straight forward session for the SX2 seeded riders with Penrite Oils Gavin Faith laying down a 31.689 second lap to lead the way.

Penrite Oils Josh Cachia has topped unseeded SX2 qualifying to kick off the on track action at Qudos Bank arena posting a time of 33.173 seconds.

With 25 riders aiming to take up the 20 spots for tonights main event those from 9th back in the session look as though they may miss the night show. 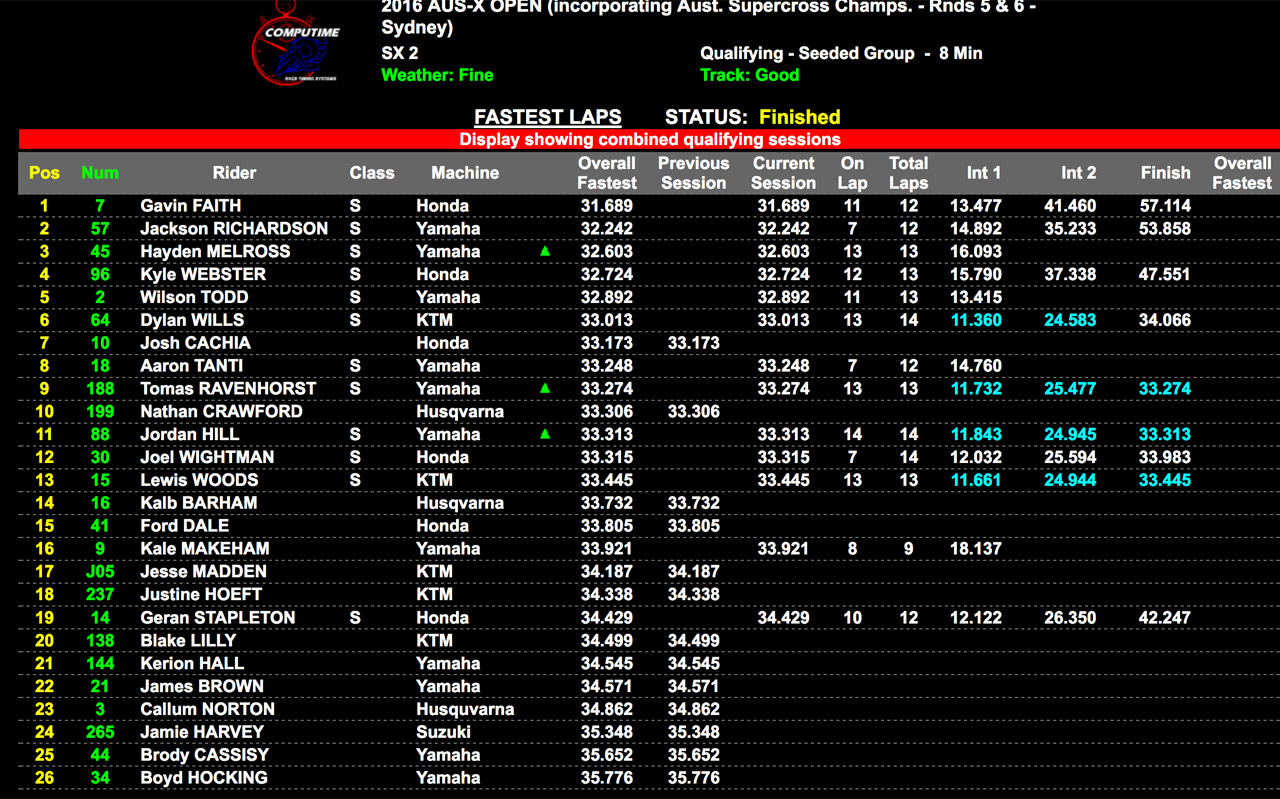