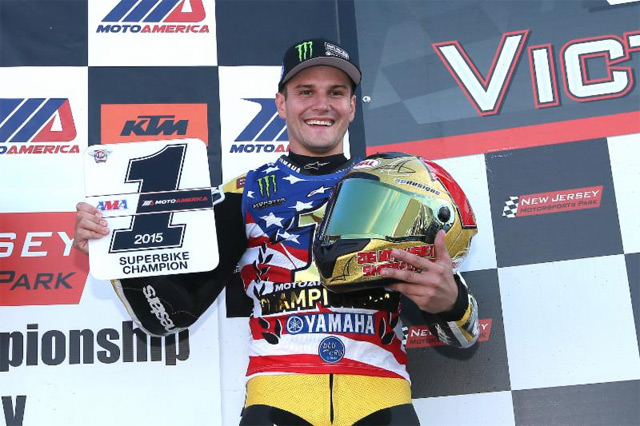 Cameron Beaubier and Josh Hayes both knew what they had to do coming into the MotoAmerica season finale at New Jersey Motorsports Park.

Hayes knew he had to go out and win both races, then sit back and see how his young teammate Beaubier responded to the pressure. Beaubier knew he had to at least finish second in the first race so he could take away some of that pressure in race two. Turns out Hayes did his part and Beaubier did his.

The end result was Hayes taking his ninth and 10th victories of the season in Sunday's two races while Beaubier finished second and third to earn the 2015 MotoAmerica AMA/FIM North America Superbike crown. 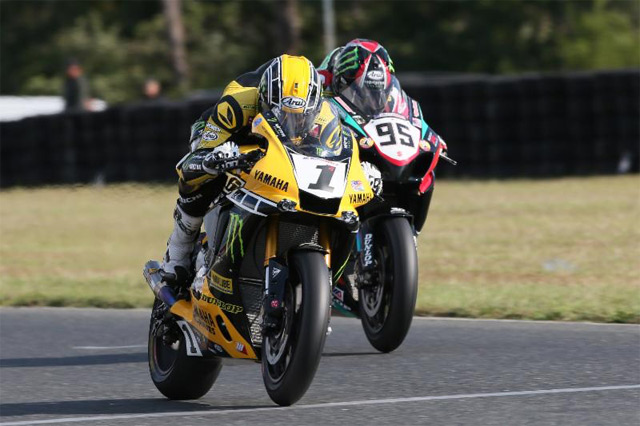 "I was riding so timid," the 22-year-old Beaubier said after earning the title in race two. "I was doing everything I could to not risking crashing or anything. I was making sure I was staying off the inside curbs.

Although Yamaha won every round, that was not due to a lack of effort on the part of Yoshimura Suzuki's Roger Hayden. And today was no different. Hayden finished third in the red-flag interrupted race one, but was less than half a second from victory.

In race two, he fought Hayes to the bitter end, coming up just .044 of a second short of victory. The two podium finishes were the 14th and 15th of Hayden's season and leaves him champing at the bit to get the 2016 season started where he hopes to be armed with a new GSX-R1000. 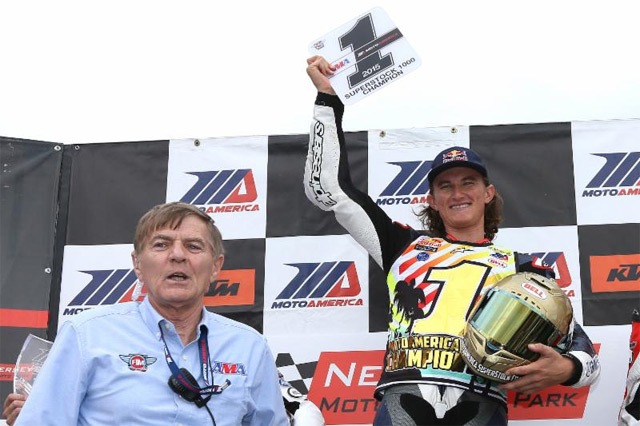 Jake Gagne won the MotoAmerica Superstock 1000 Championship. - Credit: by Brian J. Nelson.
Jake Gagne also earned a title today, the Roadrace Factory Yamaha rider sweeping to his 12th and 13th wins of the season in the Superstock 1000 class to wrap up the championship.

He also took advantage of Beaubier's caution in race two to finish third overall behind Hayes and Hayden, but it was his race-one victory that earned him the Supersport 1000 crown.

"We had an awesome year," Gagne said. "And we ended up here with the number-one plate. That was the goal we set out to do at the beginning of the year and it feels amazing to get it done.

"Especially for the whole Roadrace Factory crew... they work really hard and just to see the smiles on their face and to celebrate. It feels really, really good." 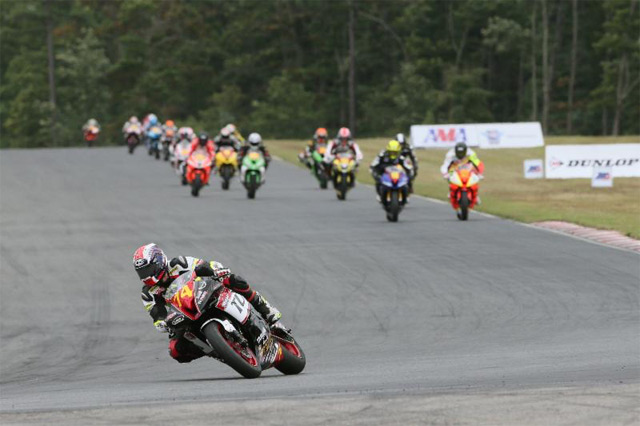 Bryce Prince (74) jumped out front early and won the Bazzaz Superstock 600 class on Sunday. - Credit: by Brian J. Nelson.
Today's Supersport class was won by Wheels In Motion/Motosport.com/Meen Motorsports' Josh Herrin, the Georgia resident battling back from his disappointing day on Saturday to win his fourth race of the season. The victory also vaulted him past Garrett Gerloff and into second in the title chase behind JD Beach, the Yamalube/Y.E.S./Graves Motorsports R6-mounted rider who had wrapped up the title in the last round at Indianapolis Motor Speedway.

Herrin beat his teammate Joe Roberts, who won Saturday's Supersport race in the rain, by just .205 of a second with Gerloff just as close in third place. Beach and Roadrace Factory's Cameron Petersen rounded out the top finishers.

"I've been kinda bummed out all weekend," Herrin said. "You can't let the rookie (Joe Roberts) come and beat you like that. I let myself down yesterday, but he did a really good job and he's definitely turning heads.

"This whole year nobody else wanted to sign me at the end of last year, so when Ameen and Gary gave me the opportunity, I decided I was going to make the best of it and really tried all year. Everybody remembers the champion and the guys who won the last weekend."

In the final championship standings, Beach ended the season with 310 points with Herrin beating Gerloff by just five points, 255-250. M4/SportbikeTrackGear.com's David Anthony ended up fourth in the final standings with Roadrace Factory's Tomas Puerta fifth, besting Latus Racing Triumph's Bobby Fong, who sat out Sunday's race with a concussion, by a single point. 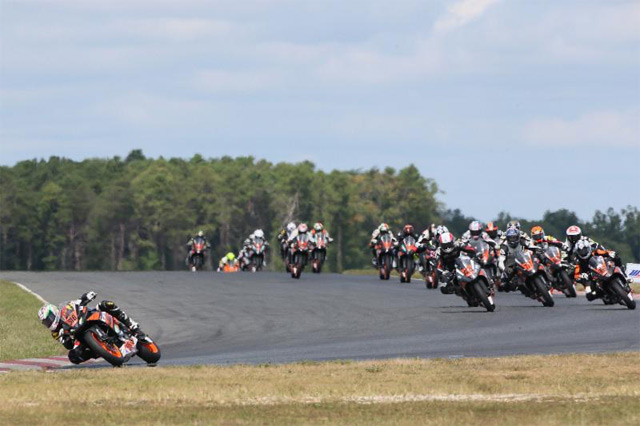 Anthony Mazziotto III (516) won his home race in the KTM RC 390 Cup final on Sunday - Credit: by Brian J. Nelson.
The KTM RC 390 Cup Series wrapped up Sunday with New Jersey's Anthony Mazziotto III making up for Saturday's close loss by turning the tables on Gage McAllister. Mazziotto and his Jimmy Winters Motorsports-backed RC 390 beat McAllister to the finish line by just .029 of a second. Brandon Paasch finished third with Xavier Zayat and Hayden Schultz rounding out the top five.

"Definitely winning my home race was very important," Mazziotto said. "I was training really hard all month long and being able to come here and actually put the plan to work... I'm glad to be up here."

The top five finishers in the KTM RC 390 Cup will be rewarded with the opportunity to head to Silverstone to battle an international field of RC Cup racers in the British Superbike Championship round. Those riders are: McAllister, Mazziotto, Braeden Ortt, Hayden Schultz and Justin McWilliams.

The final Bazzaz Superstock 600 race of the season went to Tuned Racing's Bryce Prince, the Californian beating Wyman Racing's Travis Wyman and Mach 1 Motorsports' Wyatt Farris in winning his first race of the season. Ironically, those three had all crashed out of Saturday's race.

"This track has definitely had its ups and downs for me," Prince said. "It's been very nice to me and very unforgiving at the same time. We went out there this morning and we had the pace. In the race I felt I had the pace to get out and break away. Once I got passed him (Wyman) I put my head down, turned some 24s and set a gap."

When all was said and done, Wyman narrowly missed out on finishing second in the championship (Joe Roberts wrapped up the title at Laguna Seca) by just three points to Richie Escalante, who was a non-starter in Sunday's race.