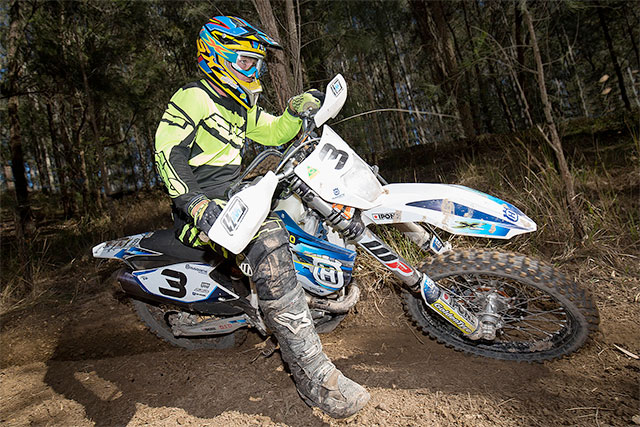 The twenty-two-year-old from Bathurst - who early in this year‰Ûªs AORC championship identified his season goal as ‰Û÷cracking the top 10 regularly‰Ûª - cracked his career-first AORC top five at round 9 of the series last month, then his first podium finish following day.

At the series finale a little over two weeks ago, Grabham used his Husqvarna FE 450 to lock up seventh in the AORC standings, and third in the highly competitive E2 category behind Tye Simmonds and former champion Chris Hollis.

Grabham clinched the title at the final hurdle, overhauling first Husqvarna Enduro Team leader Glenn Kearney and finally Beau Ralston with his spectacular results at the penultimate round on the AORC calendar at Monkerai, which served as the New South Wales off-road title finale.

"This is awesome! I was really surprised," Grabham said. "Going in I knew I would be top three, but I didn't expect to win it. Finishing 1-1 at the Enduro-X round against Kearney was where everything started going good for me.

"I picked up a lot of confidence and speed and carried it on from there. It was really close between me, Kearney and Beau in that final weekend, and being the young guy and the least experienced of all of them, I thought the pressure might get to me a little bit going in, but I was able to beat them both on the last day to wrap up the New South Wales championship.

"Going into the final round Kearney was in the lead, then Beau had the lead after Saturday's cross-country, and finishing third outright on the Sunday meant that I ended up winning it, so that was awesome!‰Û