Bou bounces back in France 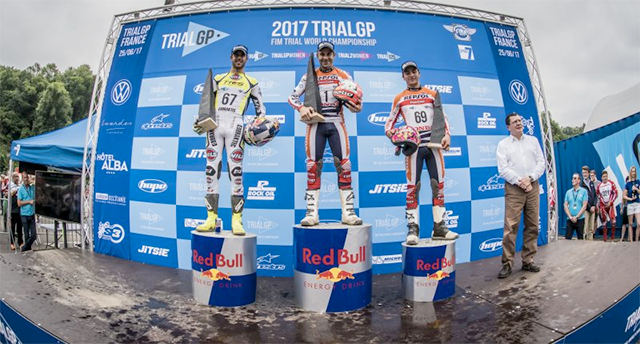 After slipping to third in Andorra seven days ago Toni Bou - Repsol Honda re-established his dominance at TrialGP France, round four of the 2017 FIM Trial World Championship, with a commanding performance.

On the back of his qualification victory yesterday, the reigning FIM Trial World Champion took full advantage of his starting position at the rear of the field to destroy the opposition in Lourdes with a divine display of Trial technique.

Following a wet opening lap that saw the majority of the field incurring time penalties after being caught up in section queues, the ten-time FIM Trial World Champion led fellow Spaniard Adam Raga - TRRS by twelve marks after parting with fifteen on observation and six on time compared to his rival's twenty-five on observation and eight on time.

With conditions drying dramatically any hopes Raga may have entertained of reeling in the leader were blown out of the water when Bou recorded a sensational clean second lap, earning him an eighteen-mark victory. 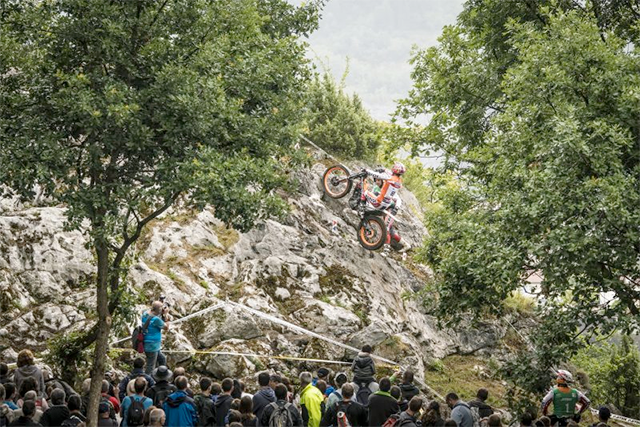 Repsol Honda's Toni Bou was back on top of the podium in France.
"After the Andorra trial, getting the good sensations back was very important for me and I struggled to be comfortable in this trial," Bou said.

"Yesterday I got the pole and today I was able to ride well on the bike and managed a zero on lap two. Everything has gone very well and this victory is very important for the championship. I also want to congratulate Jaime for joining me on the podium. He has an incredible level and I knew that these good results would come. It has been a very good weekend and I am very happy about how everything went."

Sections one and fifteen were man-made in the town centre and took few marks, but the remainder - comprising rocky outcrops on a wooded hillside - proved costly in the wet conditions of the opening lap.

Never in contention for the win after an expensive opening lap that saw him part with thirty-six on observation and five on time, Spain's Jaime Busto - Repsol Honda backed up his debut podium at TrialGP Andorra with a fighting third place, his solid second lap of just seven placing him four marks ahead of Japanese team-mate Takahisa Fujinami.

"I am very happy because it has been a difficult trial for me," Busto said. "I had damaged ribs from the Andorra trial, and they caused me a lot of pain, even so, once in the competition I was able to handle the whole event quite well. The sections, on the first lap were fine, and after drying out it got a bit easier."

Spain's Miquel Gelabert - Sherco parted with seventy-four marks for a career best equalling seventh ahead of Franz Kadlec - Gas Gas from Germany on eighty-one, Italy's Matteo Grattarola - Gas Gas on eighty-four and a disappointed James Dabill - Gas Gas from Britain who, after finishing third in qualification, rounded out the top ten on eighty-five marks.

Spain's Gabriel Marcelli - Montesa parted with twenty-nine marks to hand him a four-mark victory in Trial2 ahead of Iwan Roberts - Beta from Britain who extended his series lead. Italy's Luca Petrella - TRRS was third on forty-two.

In Trial125 Fabien Poirot - Gas Gas dropped twenty-six marks to take a popular home win with a narrow one-mark victory from Italian Lorenzo Gandola - Scorpa who overcame a disaster in qualification to retain his series lead over Britain's Billy Green - Beta who finished third on thirty-two.

The 2017 TrialGP series will now pause briefly before heading to Great Britain for round five in two weeks time.