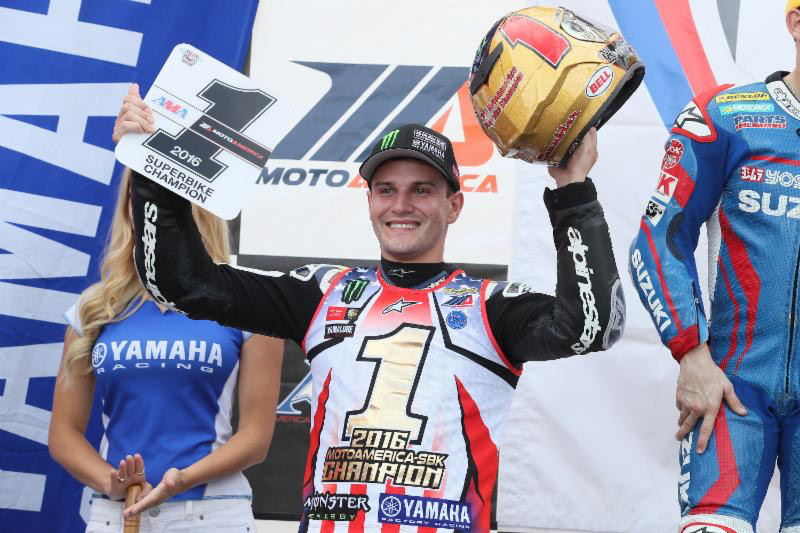 When Yoshimura Suzuki's Toni Elias barely bested his teammate Roger Hayden by .104 of a second on Sunday afternoon and Beaubier's teammate Josh Hayes crossed the line in third, he could finally lift his head. Ten minutes later, a relieved Beaubier was lifting the championship plate above his head.

And that was how the 2016 MotoAmerica AMA/FIM North American Road Race Series concluded. Beaubier had finished fourth in race one to extend his lead to 22 points going into race two. When his bike coasted to a stop on the 17th lap, all Beaubier could do was watch. With Elias besting Hayden and Hayes, Beaubier was champion by just six points over Hayes and seven points over Elias after nine rounds and 18 races.

Until things settle down on Sunday night, a shell-shocked Beaubier will be more relieved than happy. The 23-year-old Californian won eight races on the season and finished on the podium a total of 13 times.

"I honestly didn't know exactly how many laps were left because I didn't have any live feed or any live timing out there or anything," Beaubier said of his agonizing eight-lap wait. "I was just kind of sitting there. Honestly, I was so nervous I didn't even want to watch the race because I was like, 'I can't believe that just happened to me.'

"I know how strong Josh (Hayes) has been all weekend, along with Roger (Hayden) and Tony (Elias). Man, I don't ever want to root against my teammate but when I saw Tony and Roger ahead of Josh, I wasn't bummed. I will say that. I love you, Josh, but I'm sorry.

"I was pretty speechless up there on the podium. I didn't really know what to say just because there were just so many emotions going through my mind. I was so pissed off right when it happened, then got upset and then kind of just a big thing of joy. It was just a big emotion swing. No matter what happened with the bike, I think that was just an unlucky thing. I know how good those guys are and how hard they work. 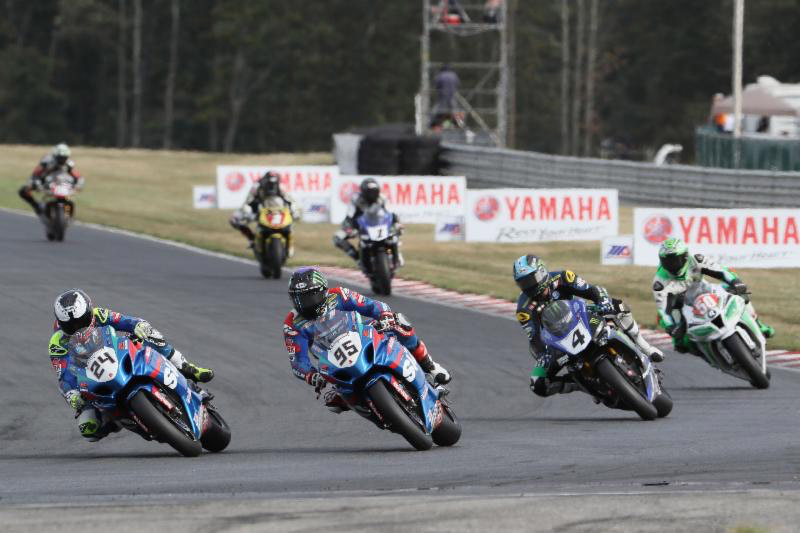 Toni Elias (24) and Roger Hayden (95) split wins in the two Superbike races. Josh Hayes (4) was second and third. Bobby Fong (5) was the top Superstock 1000 racer.
Race one was also a thriller with Hayden topping Hayes by just .104 of a second for his second win of the season. Elias was a charging third after a poor start left him lagging. A careful Beaubier was fourth, setting himself up for what should have been a relatively relaxing race two. But that wasn't to be as his bike had a rare mechanical failure and he was left holding his breath on the sidelines.

"Friday I had really good pace right away and then I crashed and kind of lost my mojo a little bit," Hayden said after winning race one. "I've really been working hard on the last 10 laps of the races - where I'm always there, but I can't close them out.

"This morning I went out on a tire that had 12 laps on it and did a 21.6 and I thought, 'okay, I think I have a pretty good chance, or as good a chance as anybody.' I wanted to do something different. I usually follow, and today I wanted to lead and try to set the pace. I actually had the speed. I saw .8 and then I saw .0 and I was just thinking, 'not again.' The last lap I didn't know if I was going to make turn one because I had the thing locked up.

"After I got through there I kind of knew some places where I needed to block, but I didn't want to over block and kill my speed. So I'm just happy for the team, happy for myself. We all work hard. This guy's (Hayes) got the best of me many, many, many a time so finally it was my turn.

Despite his best effort in the final corner of race two, Hayden lost out to his teammate Elias at the line. It was Elias' sixth win in his rookie MotoAmerica season and the Spaniard vowed to be back for more in 2017.

"I felt very comfortable since the beginning," Elias said. "I could arrive quickly to the top of the race. I would like to fight more for the championship, but 35 points was a lot. Cameron (Beaubier) was too far (ahead). After the first race he stayed there in third position.

"He has been really smart and that's why he's the champion. I still think (back on) the rain race we had here in April because I lost 47 points in one day and said, 'maybe this will be the key of the championship.' And finally it's like this. Anyway I led a lot. We had great battles.

"They are really strong. We work with Suzuki with my team hard to improve this bike. Here we make a step. We will try to make more steps for the next season. We will see. Thank you, everybody, my team to give me this opportunity, the MotoAmerica staff and all the people of this paddock because everybody treat me really well. I feel like home." 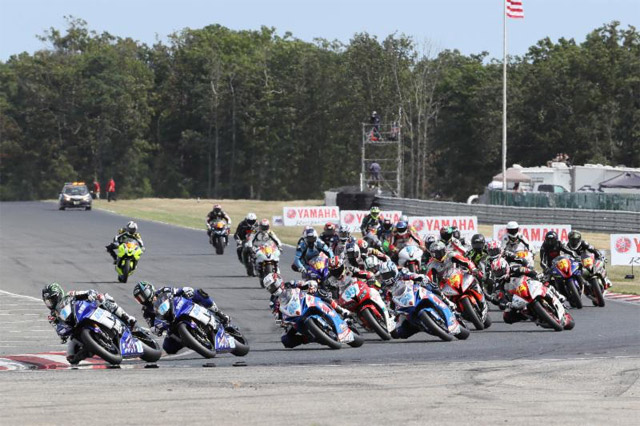 JD Beach (1) topped Gerloff (31) and Valentin Debise in the final Supersport race.
The top Bazzaz Superstock 1000 in both races was Quicksilver/Latus Motors Racing's Bobby Fong, the Californian winning both and finishing fifth and fourth overall in the two Superbike races in the process. Fong was scheduled to fly to Germany on Sunday night where he will compete next weekend in the World Superstock Cup round.

The first champion crowned on Sunday was Y.E.S. Graves Yamaha's Garrett Gerloff, the 21-year-old Texan taking the 2016 Supersport title by just four points over his teammate JD Beach after 16 races. Beach did all he could at NJMP, winning his eighth race of the season and his seventh in a row. But it wasn't enough. Both riders had incredible seasons, but Gerloff, with 15 podiums and six race wins, was four points better to fulfill a near life-long dream of winning a professional road racing championship in what was his fifth season as a pro.

"It feels so good," Gerloff said. "I saw myself with a number-one plate back a long time ago when I was, like, 12 years old with my first-ever road race bike and to finally get there and do what I always knew I could do... it was amazing. This year has been so awesome. I rediscovered my love for motorcycles, which I don't want to say has been missing, but I just needed some time to grow up a little bit. I love racing. I love riding my bike. Really this year has been awesome.

"I had my head get in the way a few times this year towards the end of the season. I was definitely a head case out there this last race. It was the longest 23 laps of my life. To be able to finish behind a champion like JD (Beach) in the race and to have a gap over third, it made my life a lot easier.

"I was pretty lucky to be able to just kind of cruise home and come across the line in second place, which was what I needed. I'm just happy that everything worked out and so thankful for all the hard work the team has put into the bikes and me and JD and for putting together one of the best teams in the paddock. I just can't thank them enough, Yamaha, all my personal sponsors, my family, everybody that's done something for me over the years to get me where I am."

Class champion Bryce Prince, won the Superstock 600 race on his Riders Discount/Tuned Racing Yamaha. The Californian was sixth overall on his Yamaha R6. HB Racing/Meen Yamaha's Richie Escalante, Saturday's winner, was second in class with Travis Wyman third on his Kyle Wyman Racing Yamaha. Escalante ended up second in the championship despite missing the first four races with a knee injury.

The second of two KTM RC Cup races was held on Sunday with Double B Racing's Jody Barry beating AXcess Racing's Brandon Paasch by just .178 of a second after 13 laps of the 2.250-mile NJMP racetrack. It was Barry's second win of the season. Yates Racing's Ashton Yates finished third.

Championship runner-up Anthony Mazziotto III, sixth on Sunday, and Yates will join MotoAmerica KTM RC Cup Champion Paasch in taking on the world in the KTM RC Cup World Final in Assen, Holland in three weeks, the trio being rewarded for taking the top three spots in the championship. 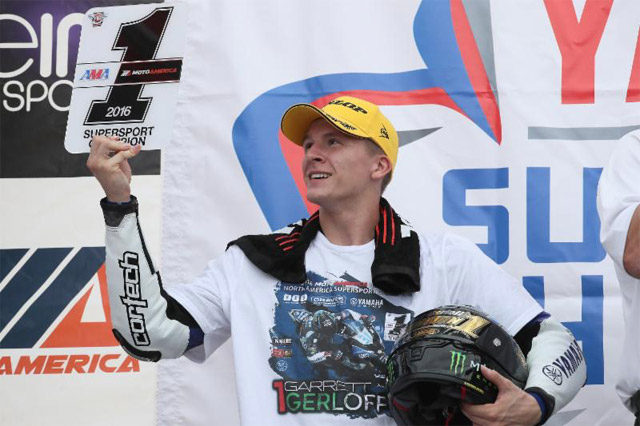