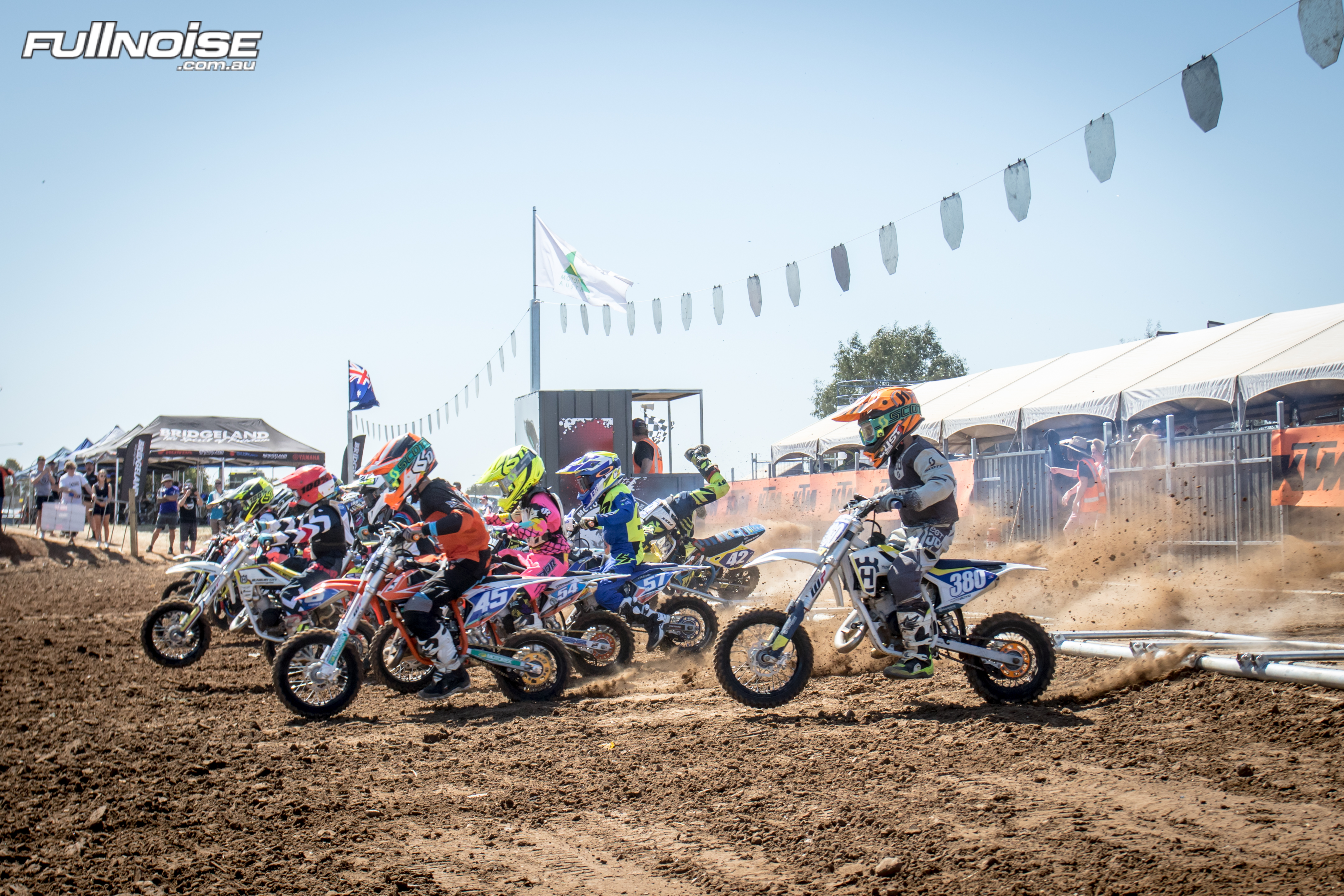 Early morning cloud cover greeted riders for the fifth day of racing action at the 2019 KTM Australian Junior Motocross Championships being held at the Motocross Riders Association in South Australia.

Much like the action on track, the clouds parted, and the heat once again rose with this year‰Ûªs championship contenders pushing it to the limits in the quest for glory.

100-125cc 2st ‰ÛÒ 13-U15
Queenslander Jackson Camilleri opened his day strongly with a commanding victory in the first final of the 125cc 13-U15 Years class, defeating rival and West Australian Brock Flynn and Queenslander Jack Mather salvaged third. The fastest lap time for this final was 1:50.211 by Jack Mather.

50cc Division 2 ‰ÛÒ 7-U9
West Australian Mason Brown is proving to be unstoppable, adding another race victory in the 50cc Division 2 7-U9 Years class to his name. Behind him was Queenslander Kyle Harvey, with the quickest lap time of the race 2:21.452 followed by Bodie Court also from Queensland.

In the 50cc 5th final for the week and second of the day it was Western Australian Mason Brown who kept his winning run alive, making it five wins from five starts on the week. Queensland‰Ûªs Kyle Harvey came home in second, while Brian Gyles rounded out the top three with an impressive performance.

128-150cc 2st/200-250 4st 15yo
South Australian Alex Larwood stormed out of the gate in his first race of the day with an impressive fastest lap time of 1:44.871 to take the win. Once again it was another close fought affair for second and third in the Junior Lites for the 15-year old‰Ûªs, with Levi Rogers slotting into second and New South Welshman Blake Fox closely crossing the line in third.

Alex Larwood raced to a dominating win in the final moto of the day and the 5th final of his class setting the fastest lap time of the race on his way to a 15.5 second win over Blake Fox from New South Wales. Queensland‰Ûªs Levi Rogers just held off New South Welshman Brock Ninness for third.

65cc 7-U10
The 65cc 7-U10 class burst onto the scene for their second final of the week and the race for the victory was a close fought affair with Queenslander Cooper Downing pushed by Tasmanian Cooper Ford all the way to the finish, with Downing holding on to take a narrow one second win.

Third place finisher was Jay Jennings from Tasmania who crossed the finish line less than one second behind Cooper Ford, while, Jack Burton (NSW) was fourth with the quickest lap time of 2:15.228.

100-150cc 2st/200-250cc 4st‰ÛÒ 13-U16 Girls
The junior lites girls gave it everything they had in their fifth final of the KTM AJMX championships and it was Queenslander Charli Cannon who once again emerged victorious, clearing the field with a super quick lap time of 1:55.954. Fellow state counterpart Taylor Thomson (QLD) slotted into a comfortable second and Victorian Madison Healey round up the top three.

85cc 2st‰ÛÒ 150cc 4st 12-U16 Girls
The fifth final of the ladies mini lites 12-U16 Years division was all about Queenslander Charli Cannon with another impressive lap time of 1:58.162. Fellow Queenslander Taylah McCutcheon came over the line for a very close second the difference separating them only 17 seconds and Victorian Taylor Thompson crossed the line for third not long after.

100-125cc ‰ÛÒ 2st 15yo
Local Legend, Alex Larwood (SA) rebounded from yesterday‰Ûªs disappointment, taking the win in the fifth final of this class with a fast lap time of 1:47.148. New South Welshman Blake Fox lodged a second-place finish and was followed by Queenslander Levi Rogers for third.

85cc 2st/150cc 4st‰ÛÒ 12-U14
The second final of the mini lites BW class was won by New South Welshman Connor Towill with the fastest lap time of the race 1:56.546. He was followed closely over the finish line by his fellow counterpart Seth Burchell (NSW) and third place was taken by yet another New South Welshman, Ryder Kingsford.

85cc 2st/150cc 4st ‰ÛÒ 14-U16
The all-important fifth final of the Mini Lites BW 14-U16 Years was all about New South Welshman, Ben Novak (1:53.867) after he displayed a commanding ride, taking the win by over seven seconds from Hunter Collins also from New South Wales and Queenslander Zachary Watson rounded of the top three for the race.

65cc ‰ÛÒ 10-U12
This fifth final of this class was one of the most exciting of the day with emerging West Australia superstar Kayden Minear taking victory in a massive battle between the top three. New South Welshman Ky Woods crossed the finish line second in front of Queenslander Heath Fisher who established himself in the top three.

With the penultimate day of racing coming to a close, every class will line up for one more moto tomorrow as the 2019 KTM AJMX comes to an exciting conclusion and 12 riders are crowned as Australia‰Ûªs best junior racers for the year.