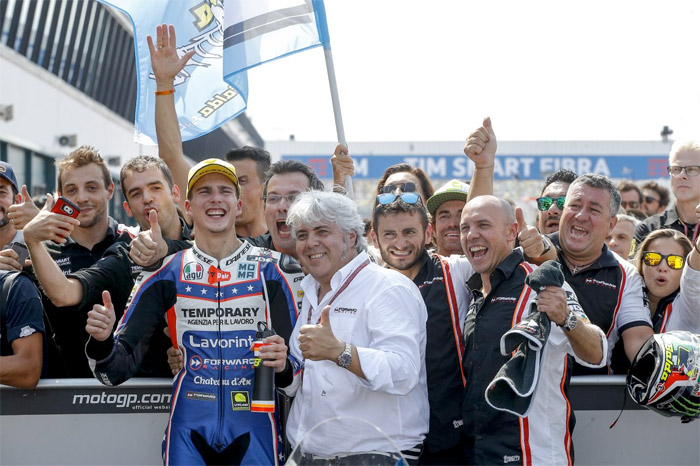 In the Honda-powered Moto2 race, Lorenzo Baldassarri (Forward Team Kalex) claimed a memorable maiden GP victory in front of a jubilant home crowd after coming out on top of a thrilling battle with Alex Rins (Paginas Amarillas HP 40 Kalex).

Rins, still recovering from a recent shoulder injury, was able to ascend the order during a chaotic first few laps and establish an early advantage, only for a resolute Baldassarri to reel him in.

Finally the Italian teenager expertly dived past the Spaniard at Quercia corner. But title-challenger Rins retaliated, knowing that every position may have a crucial significance in the championship outcome. At one point he nearly tagged Baldassarri‰Ûªs rear wheel and had to run off track. The 20-year old was nonetheless content to rejoin in second place to close Johann Zarco‰Ûªs (Ajo Motorsport Kalex) championship lead to three points.

‰ÛÏIt was really an amazing thing to have won here the first time, in the circuit dedicated to Marco Simoncelli." Baldassarri said. "It‰Ûªs really a special day with my fan club coming here on a special date that we commemorated with our livery. It was a fantastic race, I still cannot believe it, I realized that Rins had gone off when I crossed the line.

"Thanks to everyone: my team, to Giovanni, the VR46 Riders Academy, to my family and to those who came to cheer for us this weekend.‰Û