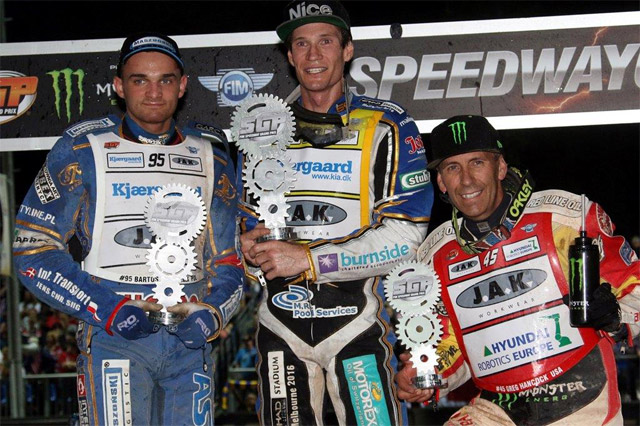 Australian star Jason Doyle admits he‰Ûªs fuelled by a desire not to throw away his chance of FIM Speedway Grand Prix glory after storming to a sensational German SGP success in Teterow on Saturday night.

The Newcastle-born racer won the historic 200th SGP event ‰ÛÒ his third SGP round of the season and his second on the trot. He did it the hard way after rounding Polish starlet Bartosz Zmarzlik with an epic opening lap and a half to triumph in the final.

While the 46-year-old Californian is in his 22nd SGP season, 30-year-old Doyle is only in his second. After years of dealing with doubters and injuries, the Swindon, Zielona Gora and Rospiggarna man is grafting hard to make up for lost time.

Asked what drives him to succeed, the Prague, Gorzow and Teterow winner ‰ÛÏI think many years ago, I didn‰Ûªt have what I have worked for now. I don‰Ûªt want to throw it away." Doyle said.

"I had many years with injuries and people putting me down, saying I wasn‰Ûªt good enough and ‰Û÷go back to Australia.‰Ûª

‰ÛÏI‰Ûªve spent a lot of money. People just think you rock up with two or three bikes and that‰Ûªs it. But there is a lot of behind-the-scenes work with engines and with the boys.‰Û