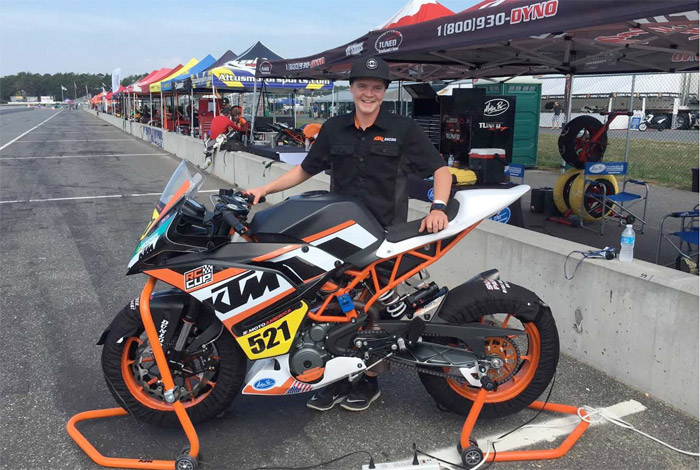 Talented KTM-backed multiple Australian dirt track champion Jarred Brook has proven that when it comes to motorcycles and smooth surfaces, there is very little he can't do.

Brook has just concluded an incredible transition to road racing, successfully contesting an American national championship round less than three weeks after his first ride on the bitumen.

The 18-year-old apprentice carpenter who is backed by Wide Bay Motorcycles in Gympie, last weekend competed in the final round of the Moto America series‰Ûª KTM RC Cup.

Designed around KTM's spectacular Moto3 inspired RC 390, the KTM RC cup is for riders under 22 years of age, and provides an opportunity for emerging talent to learn the ropes using control tyres and the same base motorcycle.An agile, pure sports bike, the RC390 boasts an incredibly light, 36kg, 44hp, 375cc fuel-injected engine in a Moto 3-styled package that delivers scalpel-sharp handling ‰ÛÒ whether you find yourself in the peak-hour rush or on the race track.

Brook‰Ûªs decision to race the RC Cup was a bold one, given that he had never even ridden a motorcycle on a bitumen race track two weeks prior to the event!

KTM Australia enlisted the help of three-time World Superbike Champion Troy Bayliss to help guide the talented youngster, who justified everyone‰Ûªs faith ‰ÛÒ not only by keeping his RC shiny side up all weekend, but by finishing in 20th and 26th position across the two races.

Brook got faster all weekend, ultimately getting his fastest race lap to within less than four seconds of the fastest regular RC390 racers.

‰ÛÏIt was a lot of fun being back over racing in the USA again." Brooks said. "It was a great new experience to race on the road, against new people and on a new track.

"I went pretty well with the very little experience I have on the road. Every time I got on the track I improved my times a lot. Between qualifying and the first race I dropped around four seconds off my lap time. By practice on Sunday morning I ended up having the 11th fastest lap time. Troy's (Bayliss) mentoring helped me greatly before I went over.

"His tips and advice helped me out a lot to change my style from being a dirt tracker to a road racer. Road racing has been something that I have thought about doing for awhile now. It's a lot of fun and I like riding them. I would love to start racing more road racing.‰Û