The MXGP of The Netherlands had an epic summer vibe to it today as that fiery ball in the sky, people normally refer to as ‰Û÷the sun‰Ûª, lit up the clear blue skies and added a sparkle to the 25,000 tons of beach-like sand that was imported into the Dutch TT Circuit this week in order to make a world-class circuit for the sixteenth round of the FIM Motocross World Championship.

The track built here in Assen provided a new challenge, one that got the better of some of the most talented riders in the world as they struggled to come to grips, quite literally, with the super soft and shifty sand. In MXGP, Red Bull KTM Factory Racing‰Ûªs Antonio Cairoli reminded us why he is one of the greatest ever as he took the new surface in his stride and went pole for the third time this season. Meanwhile, the most impressive rider today was Red Bull KTM Factory Racing‰Ûªs Jorge Prado, who went pole in MX2 class.

The final round of the FIM Women‰Ûªs Motocross World Championship also got underway today with JCR Altherm Yamaha‰Ûªs Courtney Duncan taking her fifth race win of the season while Team One One Four‰Ûªs Livia Lancelot wrapped up the title with her fourth place finish. In addition to the premier classes, the FIM Veteran‰Ûªs Motocross World Cup had their first race of the weekend with the defending champion Mats Nilsson taking the win. 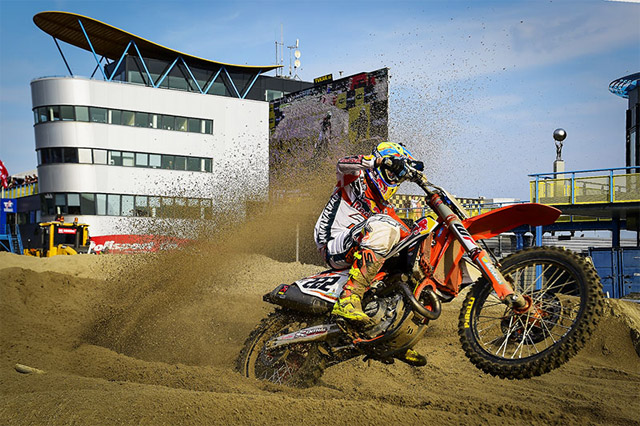 Heading into this weekend Honda Gariboldi‰Ûªs Tim Gajser has a 99-point lead over Red Bull KTM Factory Racing‰Ûªs Antonio Cairoli. If Gajser can finish this grand prix with 1 point more than Cairoli, he will be crowned world champion. If not, the championship will live another week.

With that said, the pressure is on the eight-time champ, Cairoli, to keep the championship alive, which looks pretty promising after watching him demolish the field for his third qualifying heat win of the season. It should also be said that the last two times he went pole, in Germany and in Switzerland, he went on to win the grand prix.

Experiencing dÌ©jÌÊ vu is a weird feeling, and one that quite a few people would have had to deal with this weekend when the Dutchman, Glenn Coldenhoff ripped the holeshot, just like he did last year. Maybe it has something to do with the Dutch fans because while it is his home grand prix this weekend, he hardly has a home soil advantage on a track that is made out of imported sand, and only exists seven days a year. Anyway, he rode the wheels off of his Red Bull KTM to keep Clement Desalle at bay for second place.

One of the biggest stereotypes in Europe is that Belgian‰Ûªs are fast in the sand. There is some truth in that statement, although two of the fastest Belgian‰Ûªs in the world, Monster Energy Kawasaki Racing Team‰Ûªs Clement Desalle and Monster Energy Yamaha Factory Racing‰Ûªs Jeremy Van Horebeek both say that they prefer hard-pack. Regardless of what they say, they would have fooled you today with their brilliant rides for third and fourth respectively.

Rounding out the top five was Monster Energy Kawasaki Racing Team‰Ûªs Jordi Tixier who is rapidly improving on the big four-fifty. As for the other guys you may have expected to be up front, Rockstar Energy Husqvarna Factory Racing‰Ûªs Max Nagl crashed on the opening lap with last years grand prix winner Wilvo Virus Performance KTM‰Ûªs Shaun Simpson right on him. Simpson had nowhere to go but right into him with Team HRC‰Ûªs Evgeny Bobryshev finishing them both off.

Nagl managed to come home in twelfth, while Simpson put his incredible speed in the sand to good use and finished ninth. Bobby, on the other hand, pulled into pit-lane a few laps later and didn‰Ûªt finish the race. And on the topic of DNF‰Ûªs, Monster Energy Yamaha Factory Racing‰Ûªs Romain Febvre didn‰Ûªt finish either because his electric start let him down after he tagged fellow Frenchman, Tixier, in a battle for fifth and tipped over.

As for Honda Gariboldi‰Ûªs rookie sensation Tim Gajser, he stalled his momentum on the ‰Û÷corner of Struggle Street and Victory Lane‰Ûª this morning when he didn‰Ûªt even crack the top ten in Timed Practice. His uncharacteristic twelfth place in the timed session meant he didn‰Ûªt have the greatest of starts, which only saw things go from bad to worse when he buried the front in the soft sand and went over the ‰Û÷bars. He didn‰Ûªt take too long to regroup though, and managed to salvage seventh place. 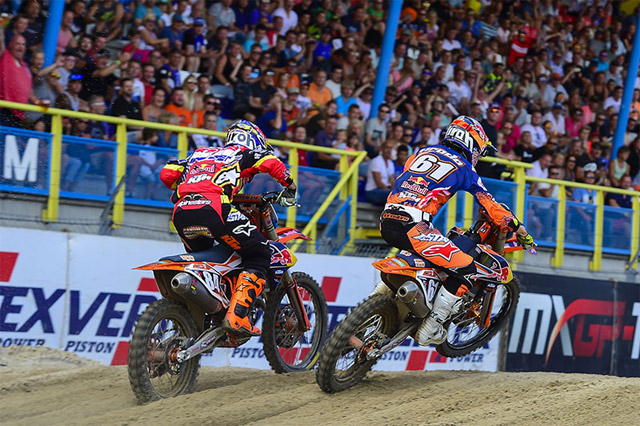 You probably would have expected this race report to start with Red Bull KTM Factory Racing, although you would never have guessed that the name that is about to follow is Jorge Prado.

Yes, that‰Ûªs right! The fifteen-year-old Spaniard pulled a massive holeshot and led every single lap to take the checkers on his MX2 debut. It was jaw dropping.

The next question is bound to be ‰Û÷what happened to Jeffrey Herlings? Well, after putting everybody to shame in the timed session, as expected in sand this deep, The Bullet got off to an ‰Û÷okay‰Ûª start, around fifth. He picked off a couple of guys but it was his pass on HSF Logistic Motorsport‰Ûªs Calvin Vlaanderen for second, that made you rub your eyes and think ‰Û÷wait a minute, did that just happen?‰Ûª Basically, he swapped his way through the waves but stayed hard on the throttle and just railed around the outside of him, on a hair pin turn! You don‰Ûªt see moves like that every day. After that epic pass, he chased his teammate, Prado, for about eight laps before his bike let go.

While Herlings had a disappointing start to his home grand prix, it was the polar opposite for the two other Dutchmen on the line, Calvin Vlaanderen and Brian Bogers. Both riders also ride for a Dutch team, HSF Logistics Motorsport KTM. Vlaanderen technically isn‰Ûªt Dutch. He was born in South Africa but rides with a Dutch license and lives in Holland, anyway, the Dutch fans are likely to adopt him as one of their own after his epic performance for second place in front of his teammate, and ‰Û÷real‰Ûª Dutchman, Bogers.

As if those results weren‰Ûªt crazy enough, the recently crowned European EMX250 Champion, Thomas Kjer Olsen seems to know how to keep his Bodo Scmidt Husqvarna light in the sand as he sailed to fourth place ahead of Suzuki World MX2‰Ûªs Jeremy Seewer.