Monster Energy Supercross made it debut at Mercedes-Benz Stadium in Atlanta for the second Triple crown and round 9 of the championship.

The opening race of the 450SX class saw HRC fill in rider Christian Craig take the holeshot with Blake Baggett, Chad Reed and Jason Anderson close by while fastest qualifier Marvin Musquin was back in mid field. Craig and Baggett lead the early laps until Anderson started to mix it up with Baggett and the duo went bar to bar for a few laps until Anderson got the upper hand.

Australian Supercross Champion Justin Brayton was a surprise packet when he snuck through and passed Anderson for the lead. With one lap to go the top 5 where all in close quarters with Anderson hounding Brayton for the lead, Tomac and Musquin had entered the fray also and had their own battle. Brayton stayed strong though and took his first triple crown heat win. Anderson held on for second ahead of Baggett while Tomac finished 4th just ahead of early race leader Christian Craig.

In race two it was championship leader Anderson who, surprisingly, pulled his first holeshot of the season ahead of Cooper Webb, Baggett and Eli Tomac with race one winner Brayton in 5th. Things where sedate for the first five minutes with the only action being Tomac slipping past Baggett for third. By the chequered flag it was Anderson ahead of Webb with Tomac third. Baggett was 4th and Musquin got the better of race one winner Brayton to claim 5th. 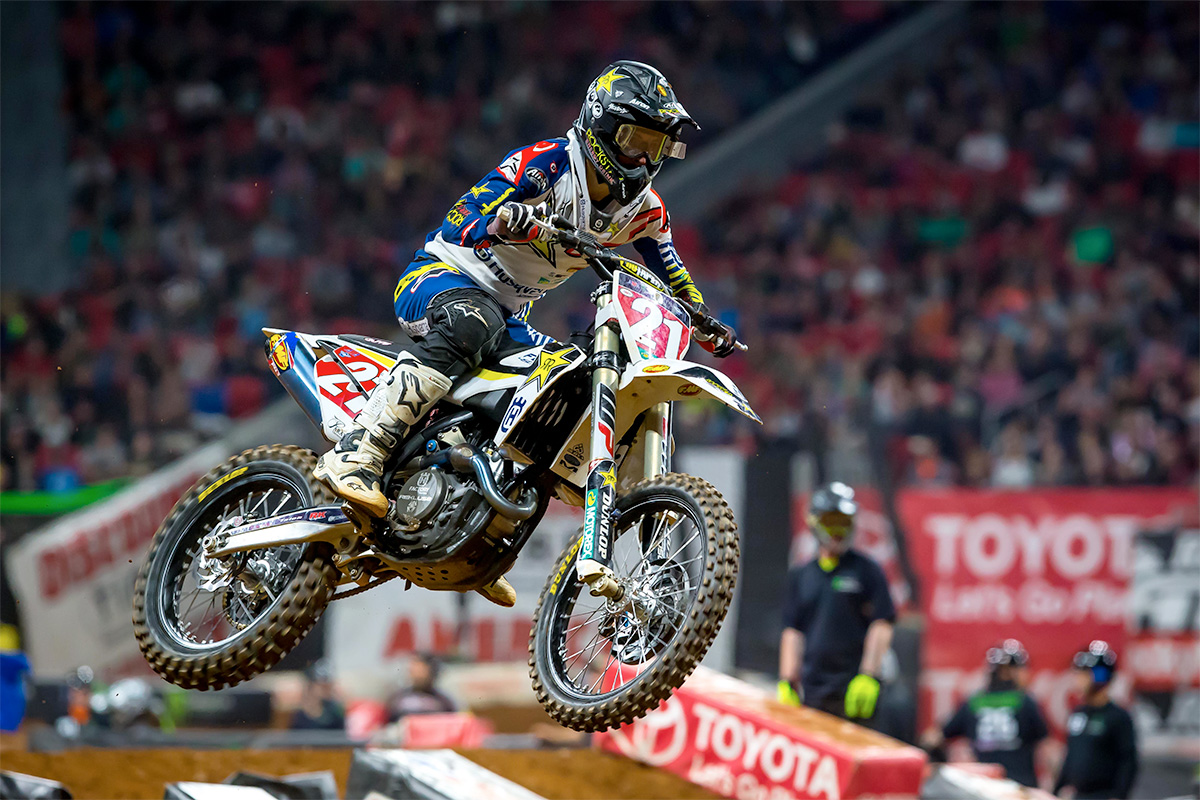 The 2-1-4 finish gave Jason Anderson his first Triple Crown victory of the season and maintains his lead in the 450 championship.
Credit: Simon Cudby
In the final moto of the three Anderson went in with a 4 point lead over Baggett and Brayton who where both tied on seven points. Eli Tomac was in 4th one point ahead of Musquin.

When the dust settled in the first corner it was Baggett with holeshot but he succumbed to Craig by the next turn. Contenders Musquin and Anderson where going bar to bar in 3rd and 4th. Musquin settled into 3rd while Anderson had his hands full with Webb and Tomac. In a night of heavy crashes Baggett added his name to the list when he cased a jump hard and crashed out, handing 2nd to Musquin.

With 10 minutes to go the Frenchman then moved into the lead. Anderson and Tomac ran 2nd and 3rd until Tomac made the pass with seven minutes to go. Webb then passed Anderson dropping him to 4th and making the overall a tight affair with Anderson now only having a three point advantage as they ran.

In the end it was Musquin with the win ahead of Tomac, Webb and Anderson. Anderson taking his second triple crown victory for the year with a 2-1-4 result. Musquin and Tomac tied on points for second with Musquin's 4-5-1 result giving him 2nd over Tomac's 5-3-2 finishes. Justin Brayton went 1-6-6 for 4th overall on the night and currently sits in 4th for championship standings.

‰ÛÏI was really able to pull through for the races,‰Û The Altlanta 250SX podium. Photo: Supercross.com
Race one of the 250SX class saw Monster Energy Kawasaki's Martin Davalos take the holeshot with defending champ Zach Osborne in close company, while Dylan Ferrandis and Jordon Smith battled it out for the podium running, Meanwhile Davalos' team-mate Austin Forkner had a bad start but worked his way forward. Disaster struck Davalos mid-race when he suffered a strange crash where he jumped off the track after getting caught up and went over the bars. From then on Osborne, who won the season opener, continued on unchallenged for the win ahead of Ferrandis and Smith. Forkner recovered from his bad start to finish fourth. After leading half the race Davalos finished 8th following his crash.

Race two saw Forkner out front from the gate drop with Davalos and Osborne in close company. Smith and Ferrandis where 4th and 5th. Things ran in that order for the first few laps until Ferrandis had a massive crash when he hit a tough block and crashed superman style over a double. With 3 minutes to go Osborne threw the challenge down to Forkner but two collided in the air with Osborne coming off second best. The Monster Energy Husqvarna rider re-mounted quickly back in third. Davalos snuck past him passed as he tried to regain his composure and deal with bike issues following the crash, Jordon Smith then snuck by into 3rd place. Davalos put the pressure on his team-mate Forkner in the last two laps and in the end was to strong and took the win in his 90th 250SX class start. Forkner finished second with Osborne holding on to third. Smith was 4th and RJ Hampshire took his second 5th for the night. Austin Forkner tied in points with Zach Osborne in the 205SX class but was awarded the win on account of the better last moto finish where he was 2nd and Osborne 4th
Going into the final heat Osborne had a slender 2 point advantage over Forkner with Smith and Davalos 3rd and 4th.

After a 6th and a 10th in the first two races, Jeremy Martin took the holeshot in the final 250SX moto with round contenders Davalos and Smith following him around the first lap. Osborne was still in contention as he battled the traffic back in 6th. All hell broke lose when Osborne was then taken down after getting tangled in someone eases crash and dropped back to 16th and a lot of work to do.

After a sedate four laps following Jeremy Martin, Davalos took the lead and looked set for the overall only to endo in the whoops and crash hard. This moved Martin into the lead with Colt Nichols second and Smith third, and now the best shot at the overall. Smith had heavy pressure from Hampshire though and eventually they collided in a corner and Smiths overall win chances went out the window.

Meanwhile Osborne had charged through the field and all eyes where on if he could claw back the round win with each passing move. With the time disappearing fast it was Jeremy Martin who took the win ahead of Nichols but all focus was on the round win battle and as Austin Forkner passed Hampshire on the last lap for third it put a rider between him and Osborne. This left both tied on points for the win with Forkner getting it on countback. Jordon Smith was third overall while RJ Hampshire and Jeremy Martin finished 4th and 5th overall respectively. 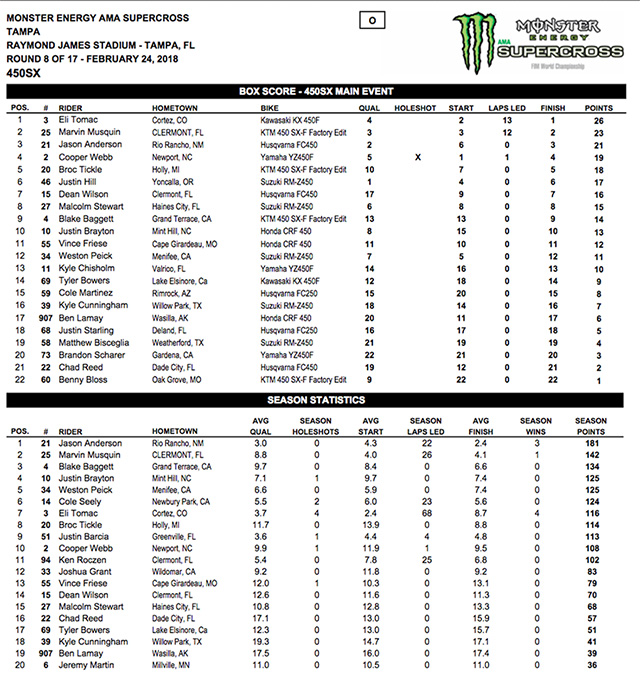 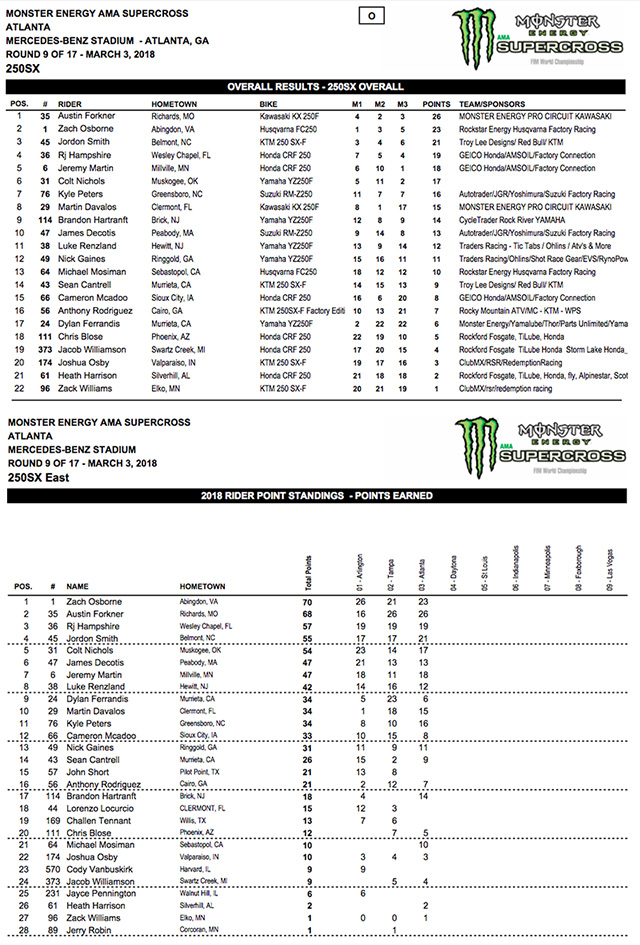