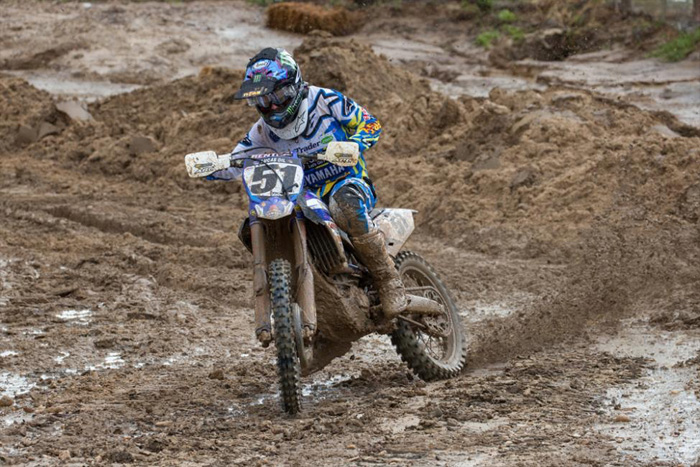 The second half of the 2015 Lucas Oil Pro Motocross Championship, sanctioned by AMA Pro Racing, will commence this weekend as the world's most prestigious motocross series continues its Independence Day tradition with the 41st Annual Red Bull RedBud National in Buchanan, Michigan.

The seventh round of the season will take place on the 4th of July for just the sixth time ever, and leading the way into action is the Red Bull KTM duo of Ryan Dungey and Marvin Musquin, who sit atop the 450 Class and 250 Class standings, respectively.

At the previous round from Budds Creek, Autotrader.com/Toyota/Yamaha's Justin Barcia finally broke through for the first overall win of his 450 Class career, overcoming incredibly difficult conditions that resulted from an afternoon of rain and thunderstorms.

In the 250 Class, Musquin earned his third overall win of the season, but was unexpectedly challenged for the victory by CycleTrader.com/Rock River Yamaha's Alex Martin, who not only earned the first moto win of his career, but also tied for the overall with Musquin to ultimately earn a career-best runner-up finish.

Since the untimely departure of GEICO Honda's Eli Tomac from the championship as a result of injury, Dungey and defending champion Ken Roczen, who rides for RCH Soaring Eagle/Jimmy Johns/Suzuki Factory Racing, have dominated the 450 Class and, in turn, have opened a considerable gap over the rest of the field in the championship standings. However, the unpredictable conditions at Budds Creek opened the door for another rider to emerge at the forefront of the division.

A native of New York, Barcia is arguably more comfortable in the wet than perhaps any other rider in the series and thrived all afternoon. While Dungey took a convincing win in Moto 1, he had a big crash off the start of Moto 2 and was left to fight his way through the field when conditions were at their worst. Barcia, who had grabbed the holeshot, took full advantage and cruised to his maiden victory both in the premier class and for the Joe Gibbs Racing Motocross effort who signed him for the 2015 season and earned just its second win in its eighth season of competition.

Rockstar Energy Husqvarna Factory Racing's Christophe Pourcel and Team Yoshimura Suzuki's Blake Baggett joined Barcia on the overall podium, with all three riders recording career-best efforts. Dungey's absence was his first of the 2015 season and his come-from-behind 12th-place effort in the final moto marked his first finish outside the top 10 this summer.

Dungey's misfortune in the second moto was the opportunity Roczen needed to try and chip away at the 37-point deficit he faces in the championship. However, the German titleholder was a bit under the weather at Budds Creek and ultimately tied his championship rival in points for the afternoon following 5-4 finishes.

For Dungey it was a best-case scenario in such a potentially damaging incident and despite getting the worst of what Mother Nature had to offer, he walked away healthy and still in full control of his own championship destiny.

Both Dungey and Roczen are former winners at RedBud, which should make for anticipated showdown Saturday afternoon. In fact, these two riders are the only past winners in the 450 Class field at the track. Roczen took the overall a season ago en route to the title, while Dungey has sat atop the podium twice, during his championship-winning campaigns in 2010 and 2012. With his breakthrough victory last weekend, Barcia should be expected to push the front duo, while Pourcel, Baggett and Rockstar Energy Husqvarna Factory Racing's Jason Anderson will all look to build upon their overall podium results this season. 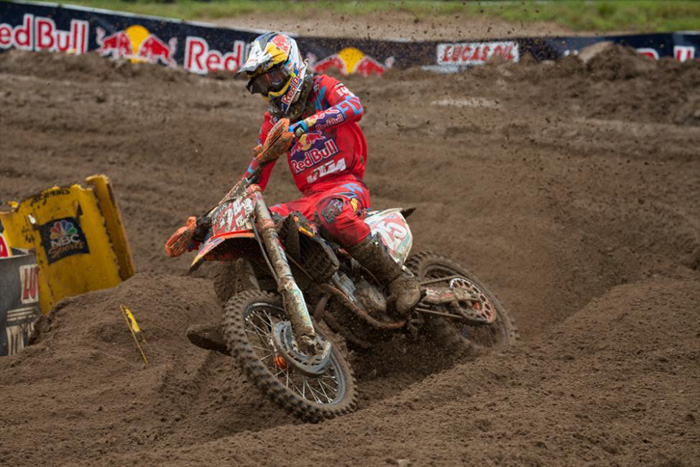 Musquin survived a wild afternoon at Budds Creek to retain control of the red plate. - Credit: George Crosland
The action in the 250 Class last weekend continued the back and forth trend we've seen between Musquin and defending champion Jeremy Martin, who rides for Yamalube/Star Racing Yamaha, all season.

Surges of momentum have been met with bouts of misfortune for both riders throughout the first half of 2015 and as a result, the points lead has changed hands between the two on several occasions. At Budds Creek, Martin looked to have the upper hand in the first moto after Musquin crashed and settled for a seventh-place finish, but in the ensuing moto it was Musquin who put himself at the front of the field while Martin faced adversity.

That shift in fortune provided an unlikely but winning 7-1 moto effort for Musquin compared to Martin's 2-6 results that ended up costing him two points in the championship. Now 10 points separate Musquin from Martin with three overall wins apiece. Earlier this season Musquin enjoyed a 19-point lead only to see that erased in the span of a single moto. With six rounds remaining this spirited battle still has a lot more ahead and as the defending winner at RedBud, and the only past winner in the 250 Class field, Martin hopes for another big points swing this weekend.

For Alex Martin, his breakout performance at Budds Creek couldn't have come at a better time, mere days after it was announced that he would join his brother at Yamalube/Star Racing Yamaha for the 2016 season with the first factory opportunity of his career. Alex's wild win in the opening moto broke the stranglehold his brother and Musquin held on the division up to that point, winning the first 10 motos of the season.

He had his work cut out for him in Moto 2, but battled his way to a seventh-place finish after coming out of the gate outside the top 10. His 1-7 moto scores equaled those of Musquin, but the second moto tiebreaker was the deciding factor in keeping Alex from his first ever overall victory, still resulting in his first ever appearance on an overall podium.

All three riders finished on the podium in one of the motos at Budds Creek, with Savatgy claiming his first overall podium of the season when all was said and done. Each rider moved up one spot in the championship standings as a result of their performance, with Cianciarulo now third, Savatgy fourth and Osborne fifth.

RedBud has served as the centerpiece of the Lucas Oil Pro Motocross Championship for decades, both as a result of its placement in the middle of the season and its distinction as being one of the most highly attended events on the schedule.

The track hosted its first ever Lucas Oil Pro Motocross Championship event in 1974, but it wasn't until 1978 that it found a home as the sport's way to celebrate Independence Day, establishing a tradition that has thrived ever since.

Located just above the Michigan-Indiana state line in the beautiful rolling hills of southwestern Michigan, RedBud is among the most highly regarded motocross tracks in the world thanks to its series-leading attendance year after year and arguably the best racing surface in all of American Motocross.

The Red Bull RedBud National gets underway this Saturday, July 4 and can be viewed live in Australia on FOX Sports 1 from 3.00am AEST Sunday the 5th of July.