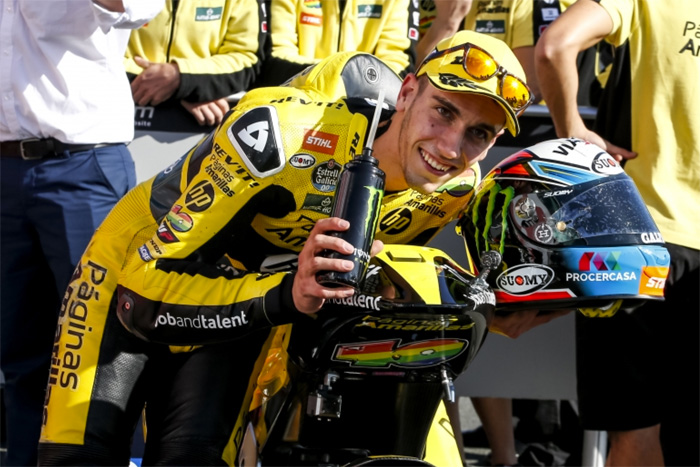 Rins started from pole position, took the lead on the second of 25 laps and won the race by a very comfortable six seconds.

With Tito Rabat (Estrella Galicia 0,0 Marc VDS Kalex) having withdrawn from the race after a practice crash exacerbated an existing injury, Rins‰Ûªs second win of his rookie Moto2 season moves him ahead of his Spanish compatriot, into second in the championship.

Second place was disputed between Sam Lowes (Speed Up Racing Speed Up) and Thomas Luthi (Derendinger Racing Interwetten Kalex), each a winner this year. Luthi seemed to have escaped, but slipped off, rejoining to finish 15th and handing 20 valuable points to the Briton.

A similar battle for third was resolved in favour of podium first-timer Lorenzo Baldassarri (Forward Racing Kalex). He had passed Jonas Folger (AGR Team Kalex), but the German was poised for a counter-attack when he suddenly slowed then retired, with a rear-wheel puncture.

‰ÛÏIt was a difficult race ‰ÛÒ staying focused, staying in front, braking at the good points every lap." Rins commented. "At the beginning I was a little bit nervous, but I was able to concentrate my mind and to push for my best pace and finally I got the victory.

"All weekend we have worked really well, and we feel strong to go to the next race.‰Û