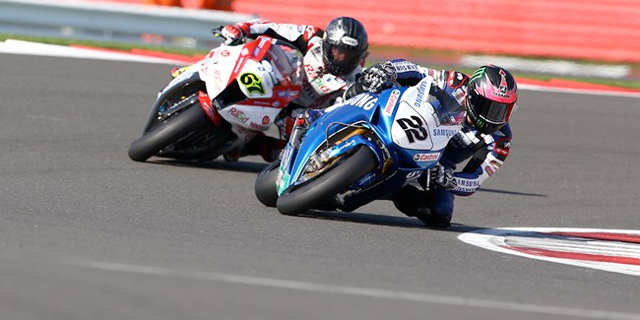 Alex Lowes and Shane 'Shakey' Byrne locked horns again in the penultimate round of the MCE Insurance British Superbike Championship Showdown at Silverstone as the Samsung Honda rider narrowly emerged victorious in the opening race of the day, with the pair dicing all the way to the chequered flag.

Byrne had taken the lead on the opening lap as he continued to battle through the pain of his huge high-side yesterday, snatching the advantage from Lowes and Josh Brookes, but the Samsung Honda rider then moved ahead and although Byrne fought back instantly he couldn't get ahead.

Brookes then attacked Byrne, moving up to second but within three corners Byrne was back ahead and gunning for the lead. He attempted to pass Lowes into Stow on the third lap, but his main Title Fighter rival wasn't giving an inch and he held the lead.

The leading trio were locked in formation but there was heartbreak for Brookes and the Tyco Suzuki team when he was forced to retire on the fifth lap with a technical issue that saw him again fail to score points.

Brookes' retirement promoted his team-mate PJ Jacobsen to third and he in turn was coming under pressure from the leading Milwaukee Yamaha of Tommy Bridewell. The American had the advantage until the closing stages but it wasn't until the final lap that Bridewell managed to push ahead and score his second podium finish for Milwaukee Yamaha ahead of Jacobsen.

At the front of the pack Lowes and Byrne were again inseparable and it came down to the final lap as Byrne hit the front at Maggotts with a decisive move down the inside. Lowes however was soon on the attack and after looking for the entire lap he reclaimed the position at Brooklands and despite Byrne trying to regain the lead at Luffield it came down to the drag to the line.

The pair exited Luffield side-by-side and Lowes narrowly claimed a thrilling race win from Byrne to move back ahead by four points in the overall standings.

"It was a great race with Shakey and we stopped together after the race together and said just that and thanks for a good race." Lowes stated. "It was really nice after the mistake at Assen and if you forget that now the two races we have had in the Showdown have had some awesome battles that either of us could have won so that's fantastic.

"I am pretty lucky that he isn't fully fit as that race could have been even more difficult so fair play to him and that is why he is champion. The Samsung Honda is working good and I am feeling good so I am pretty sure there will be more battles in race two and I am looking forward to it," he concluded.

The second Milwaukee Yamaha of James Ellison claimed fifth after he had carved his way up the order in impressive style following his sixth row start as he edged out Jon Kirkham on the Buildbase BMW and Matteo Baiocco on the Rapido Sport Racing Ducati who celebrated his best finish. Barry Burrell was able to claim tenth after he edged out Josh Waters in his first race with Halsall Racing Kawasaki. 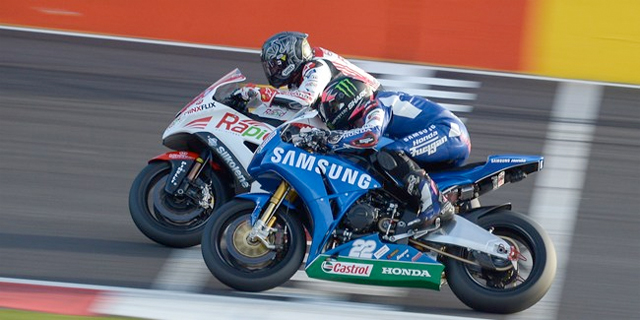 Shane Byrne moved back into the BSB Points lead at the conclusion of the penultimate round of the year by the narrowest of margins - Credit: britishsuperbike.com
Shane 'Shakey' Byrne sensationally fought back through the pain to claim the second race win at Silverstone in a photo finish with rival Alex Lowes as the defending champion leads his Samsung Honda rival by a single point ahead of the MCE Insurance British Superbike Championship finale at Brands Hatch in two weeks time.

Byrne shot into the lead from the pole position on the opening lap with Lowes in close contention and the Samsung Honda rider wasted no time in making a move at Stowe to take the lead with the Tyco Suzuki pairing of Josh Brookes and PJ Jacobsen shadowing in third and fourth respectively.

A lap later and Byrne was back in the lead with a move at the Hairpin on his rival as the leading Title Fighters continued their Showdown battle for supremacy. Lowes was determined to get back ahead and after looking several times he made a move that stuck on lap five to return to the front for Samsung Honda.

The leading pair had broken away from the chasing Tommy Bridewell on the leading Milwaukee Yamaha and Byrne was soon attacking Lowes again, diving down the inside at Brooklands on the ninth lap and defending hard. Lowes though was not giving an inch and again he made a scintillating move at Stowe two laps later to regain the advantage.

Lowes held the lead and defended hard on the final lap and looked set to claim the second win but as the pair exited Woodcote for the last time they were side-by-side and an thrilling run to the line saw Byrne win by 0.012s in a photo finish with Lowes who claimed second.

"After the weekend we have had this win feels really special." Byrne stated. I tried to make that move in the first race and get alongside Alex, but I didn't want to clip him and the last thing I wanted was to have a coming together.

"In that race to be honest with you, I didn't have a plan as we were both on the absolute limit. Alex made a mistake and I thought, 'yes this is my opportunity' and then I got flicked out of the seat and I thought 'no, no.' It was so much fun and then I got a good run onto the straight and I could see Alex was going deep to cut back at Luffield as he was strong through there.

"I done my bit of a swoop to get a run on the inside of him and I thought 'flipping hell it isn't there' and he was just out a tiny bit wider so I just pinned it and didn't shut the throttle at all." Byrne continued.

"It spun all the way through the last corner and picked up a bit of momentum right at the last second there and we got through. I was desperate to win a race again as it had been a while since we did it last.

"A great race like that is what we love and I wasn't disappointed after the first race but to reverse it on the last corner like that was just fantastic especially after the weekend we have had. It is on to Brands Hatch now to see what we can do there," he concluded

Bridewell claimed third to score his first ever double podium finish in the championship ahead of his team-mate James Ellison who overcame a huge moment in the early stages of the race when he sensationally saved a high-side. The Milwaukee Yamaha rider was off the bike and holding on as the bike continued upright before remounting at speed and salvaging fourth with a determined effort.

Ellison had closed in and passed the formation fighting Tyco Suzukis; the team-mates had been locked in a duel throughout the race with Josh Brookes having the advantage at the end from PJ Jacobsen. Jon Kirkham again returned to the top ten in seventh for Buildbase BMW ahead of Matteo Baiocco who celebrated his second top ten performance of the day for Rapido Sport Racing Ducati. James Westmoreland and Jakub Smrz completed the top ten. 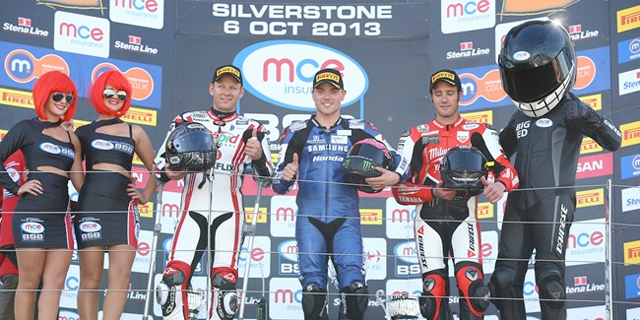