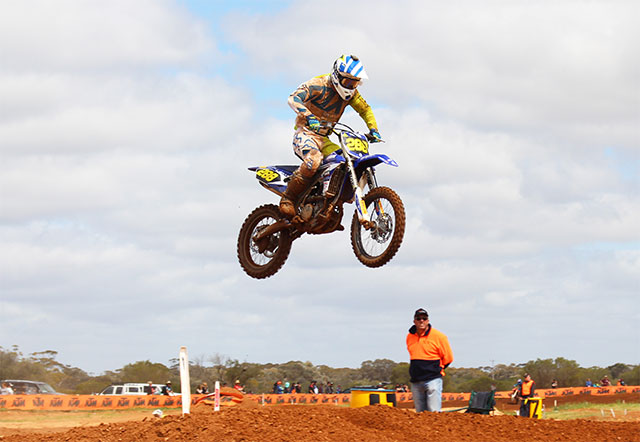 After a huge afternoon of racing at the Riverland Junior Motorcycle Club at Renmark yesterday, the track burst to life once again this morning, with riders heading out for more heat races and finals at this year‰Ûªs instalment of the KTM Australian Junior Motocross Championships.

Spectators were treated yesterday afternoon with competitors getting their KTM AJMX campaigns off to a flying start. And when gates dropped again this morning the story was no different, with riders leaving nothing on the track, making sure that they edged closer and closer to Australian titles.

The big boys in the 100-125cc 15 Years class were the first bikes to hit the Riverland circuit this morning, and KTM‰Ûªs Caleb Grothues only took one lap to move in to the race lead, followed by Mitch Outram and Michael Driscoll.

But with the 100-125cc 15 Years class being one of the most competitive of the championships, after two laps the battles on track unfolded. Before long Yamaha‰Ûªs Cody Dyce made his was in to second position, relegating Outram to third place.

And the fight for positions did not stop there, only a single lap later, Husqvarna‰Ûªs Callum Norton applied the pressure on Outram for third and within only a few turns had also made the pass on the KTM rider to slot up to third position.

With only ten minutes making up the first heat, Grothues remained calm and focussed in the top spot for the remainder of the moto, and by the time the chequered flag flew, the KTM rider breezed to victory. Second in heat one was collected by Dyce, while Norton crossed the finish line in third.

In heat two for the 100-125cc 15 Years class it was Morgan Fogarty aboard his KTM that got to a flying start, however Jye Dickson and Chandler Burns were just back in second and third positions and in no way backing off.

But after one lap it was the three-way battle for second position which captured the crowd‰Ûªs attention ‰ÛÒ Dickson, Burns, and Billy Middleton going bar to bar all the way down the start straight as riders headed in to lap three.

But it was Burns who had the determination to get to the front, moving up to second position with a few laps to spare, while Middleton also got by Dickson to snatch up third.

But when when riders crossed the line for the final time, it wasn‰Ûªt in those positions that they finished in. Despite Fogarty collecting the heat two win from Middleton in second, it was Kai Stephen who secured third. Burns dropped back to fifth position.

In heat one for the 85cc/150cc 9-U12 years, from the minute bikes hit the track, spectators were in for a special race. After just a lap, Angus Riordan and Deegan Mancinelli were neck and neck for the lead.

But after two laps, Riordan had edged out the competition and held on to the race lead, followed by Liam Atkinson and Noah Smerdon. But Mancinelli was not prepared to let a podium position slip away from him, and in the closing stages of the race made his way up to second place.

And when the chequered flag flew, Riordan did all that was required to collect his first race win of the week, while Mancinelli crossed the line in second. Atkinson finished heat one in third followed by Smerdon in fourth.

In heat two it was Blake Fox who got to the early race lead ahead of Brad West and Zachary Watson, but Fox was on a charge and after only a lap had stretched out his lead to an impressive five seconds.

From there, the only change to the top positions came from Ryan Alexanderson who made the pass on Watson for third position with close to half the moto to spare, but in the later stages of heat two Watson fought back, reclaiming third position, relegating Alexanderson to fourth.

But when the chequered flag was displayed, Fox was the man of the moment, taking the heat two victory from West, and Watson who wrapped up the race in second and third respectively.

Heat one for the 85cc/150cc 12-U14 Years category showcased plenty of talent this morning. KTM‰Ûªs Regan Duffy lead from the minute the gate dropped and after only a lap had put 12 seconds between himself and second and third placed riders Rhys Burnett and Tye Jones.

With Duffy having more than a 21 second lead at the 7-minute mark, spectators shifted their attention to the remaining positions. By lap four, Jones had made his way up to second, relegating Burnett to third.

When the last lap board was displayed followed by the chequered flag, no one was able to get close the Duffy‰Ûªs KTM machine, taking the heat one victory by 46 seconds, from Jones in second, while Zackariah Wright finished in third.

In the second heat for the 85cc/150cc 12-U14 Years class, it was the world number two Meiko Vettik who launched out of the gates and in to the race lead, but Australian Alex Larwood and Cody Chitttick who were in second and third, were not prepared to let the international run away with it.

But as heat two progressed Vettik looked more and more comfortable out in front of South Australia‰Ûªs Larwood, while Tyran Tomich made his way up to third with Chittick dropping back to sixth.

And when the chequered flag flew, it was Estonian Vettik who took his first victory on Australian soil by the narrowest of margins from Larwood in second, followed by Tomich who concluded heat two in third.

The ladies in the 100-150cc/128-250cc 12-U16 Years class had the opportunity to hit the track for their first final this morning, and after only one lap Tanesha Harnett proved that she was here for business at the AJMX in South Australia.

After leading from lap two, Harnett took the race win from Western Australian Tahlia O‰ÛªHare who finished in second, while despite leading on lap one, Ebony Harris dropped back to third by the conclusion of the moto.

Layla Norton, and Emilee McPherson wrapped up their first final in fourth and fifth places respectively.

The first heat for the 128-150cc/200-250cc 15 years class was nothing short of talent packed. And from the minute the gates dropped it was on between Yamaha‰Ûªs Michael Driscoll, KTM‰Ûªs Caleb Grothues and Cody Dyce (Yamaha) with the trio separated by only a bikes length each.

After only three laps though, Husqvarna‰Ûªs Callum Norton joined the fight for positions at the front, making up huge ground to apply the pressure on Dyce in third. And before long Norton had made the pass and moved up to Dyce‰Ûªs position.

But the focus was undeniably on the front two riders Driscoll and Grothues, who were hard at it for the top spot from the minute the gate dropped. And when the chequered flag flew after ten minutes, Driscoll just managed to hold off Grothues to take the win. Third place was collected by Norton, while Dyce finished in fourth.

In heat two, once again the depth of talent was evident. After only a couple of laps, Honda‰Ûªs Taj Marshall moved from third up to the lead position, shuffling Husqvarna‰Ûªs Riley Dukes back to second, while Morgan Fogarty also moved up to third.

As racing progressed, the fight for second position between Dukes and Fogarty kept spectators on the edge of their seats, and by lap four Fogarty had got the job done and moved in to second position.

But it was Marshall who had reason to celebrate after ten minutes, taking the heat two victory from Fogarty and Dukes who wrapped up their race in second and third positions respectively.

The second final for the 128 ‰ÛÒ 150cc/200-250cc 13-U15 Years class allowed KTM to flex their muscles. After only three laps, Mason Semmens lead the way from Rhys Budd and Regan Duffy, but Duffy was not prepared to settle for third without a fight.

Unfortunately, a mistake with only two laps remaining hindered Duffy‰Ûªs charge, and allowed Budd some much needed breathing space in second position.

But the man of the moment at the conclusion on the moto was Semmens, who steered his KTM machine to a finals race victory. Budd secured second place, while Duffy settled for third position. Fourth place was taken by John Bova, while Travis Edwards completed the top five standings.