Joan Barreda has claimed victory on stage two of the 2022 Dakar Rally ahead of Sam Sunderland and Kevin Benavides, second place for Sunderland sees the Brit take the overall lead.

After a torrid opening stage that saw many get lost today things settled with the front runners improving their places with a steady day. Stage one winner Daniel Sanders struck trouble today but still retains third in the overall rankings.

This second stage of the 2022 Dakar Rally brought about some changes as had earlier been predicted. Downpours over the last few days in the northern part of Saudi Arabia caused some flooding, such as the wash-out at the Al Artawiyah bivouac for the Marathon stage. As a consequence, the organisers yesterday decided to switch the stage 2 destination to the camp set up at Al Qaisumah. The 338.43-kilometre special stage, however, remained intact, but with the riders’ liaison section to the new bivouac lengthened for a total 453-kilometre trek. Dunes were the main feature of the day: a quarter of the timed special stage was made up of various ridges of dunes

With stage two’s triumph, Joan Barreda now holds a tally of 28 Dakar Rally stage wins. The Monster Energy Honda Team rider is the third most successful motorcycle rider in the rally’s history after Peterhansel and Despres (33).

Barreda expressed his satisfaction with the day’s proceedings on reaching Al Qaisumah. The Spaniard, who started from a favourable position to attack, let no one stand between him and his goal, completing the special with a surplus of five-and-a-half minutes over the stage’s nearest second-best rider.

“I’m happy with today, especially after yesterday’s hard day, where several riders got lost,” Barreda said. “To make up time in the general standings is good, and we have to be aware that there are ten days ahead and that anything can happen. We are physically in good shape and we are looking forward to it. We have worked all year to get here in good shape, so now is the time to get it all out. I am also happy to be the third rider in the history of the Dakar with the most stage victories. I’m proud of the work I’ve done over the years and the mark I’ve left.”

After starting sixth on stage two Sam Sunderland put together a faultless display of riding and navigation to catch the front runners, lead the stage, and then bring it home in a fine second place. The strong result moves the Brit to the top of the provisional leaderboard where he now enjoys a near three-minute advantage over Adrien Van Beveren.

“It was an interesting day today and it certainly went a bit more smoothly than yesterday, which is what I wanted,” Sunderland said. “I started sixth and focused on just pushing hard to catch the leaders. There was some tricky navigation, but I figured out the way pretty quickly and caught up to Van Beveren. We then caught up with a few more of the leading guys so from there onwards we took it in turns to navigate and it was a pretty cool way to end the stage.”

Completing stage one in 14th place, defending Dakar Champion Kevin Benavides made the very best use of his starting position to make up time on his rivals. Benavides was able to work his way up the rankings as the day progressed, moving into the top three by the halfway point. From there, the experienced Argentinian maintained a strong pace to the finish, ultimately claiming third, just under six minutes down on the stage winner Barreda. As a result he has now clawed his way back to 14th in the overall rankings.

“Today was a good day, especially after such a tough day yesterday,” Benavides said. “I started near the back and was able to push really hard. The special today was really fast in places, but also quite complicated – you had to know where to attack and where to focus on your navigation. It’s only day two and everything can happen at the Dakar – there are always ups and downs. I’m looking forward to the next few days.”

Skyler Howes has claimed a solid fourth-place. “The stage went well for me – I felt pretty comfortable riding on the wet sand. The dunes and the fast, sandy tracks were a lot of fun to ride, so today was really enjoyable, especially after some of the stresses of yesterday,” Howes said.

Toby Price’s second day at the 2022 Dakar thankfully went very much the same way as teammate Benavides’, with the Aussie building his pace throughout the day and fighting his way up the order. Completing the stage as fifth fastest, earning himself a strong start position for day three, the Australian will aim to move up from his 15th position on the overall leader board tomorrow.

“Today went a lot better than yesterday, and I was able to claw back a little time on the leaders,” Price said. “It’s always tough when you lose a big chunk of time early on, but it’s still very early days and there’s a lot of racing left. The bike is really good – I’m feeling really comfortable – so let’s continue tomorrow and see what happens.”

Fresh from taking his maiden Dakar stage win yesterday, Daniel Sanders did a great job of opening the majority of today’s stage, frustratingly making a small but costly navigational error on his way into the finish, which led to him ending the special close to 25 minutes behind the day’s winner.

Daniel Sanders found himself on the wrong side of a canyon nearing the end of stage two, he had to make a quick decision. Instead of turning back, he opted to jump clean over it to get himself back in the race, which, fortunately, worked out perfectly! From there onwards it was a hard charge to the finish line. Despite losing a little bit of time, Sanders lies in a strong third in the overall provisional classification, just three-and-a-half minutes down on teammate Sunderland.

“Today was pretty wild to begin with as it was pretty cloudy and the stage was super-fast early on,” Sanders said. “I had a good day going until after a fuel stop where I went down the wrong side of a canyon and lost a little bit of time. In the end I had to jump over it to get out of it but once back on the right line I pushed on to the finish. A little frustrating but I was able to make up some time in the dunes so all in all, not a bad day really.”

Stage 3 has also been affected due to the change of today’s bivouac. Race organisers yesterday decided to cancel the first sector of the special, so riders will not have to complete the 368-kilometre timed stage. The first riders are expected to arrive back in Al Qaisumah at approximately 13:00. 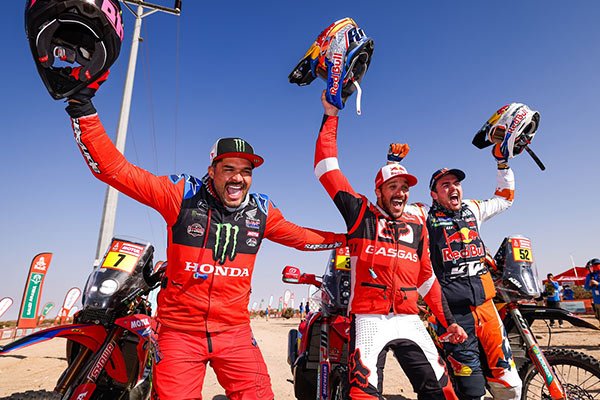 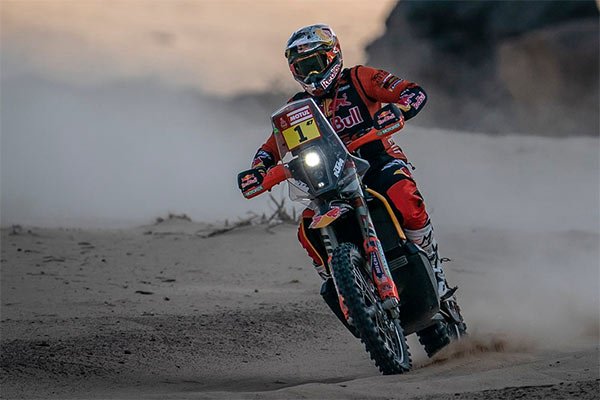 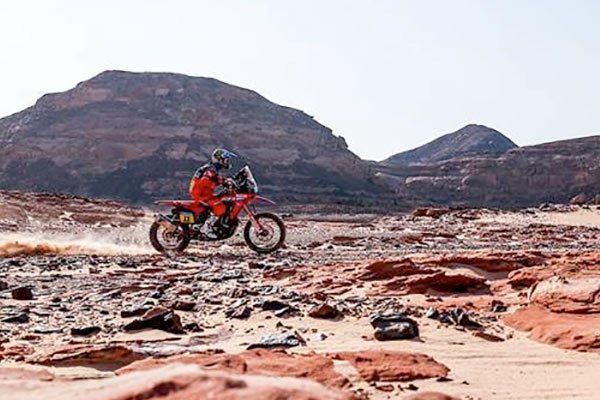 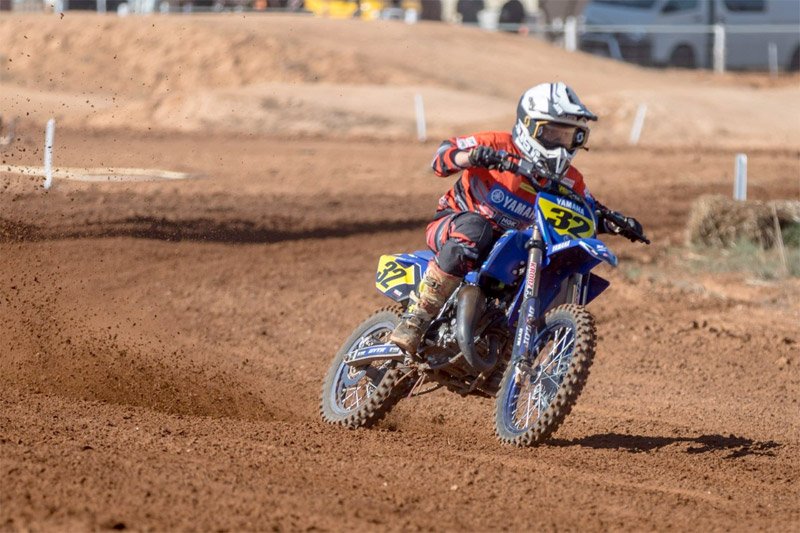 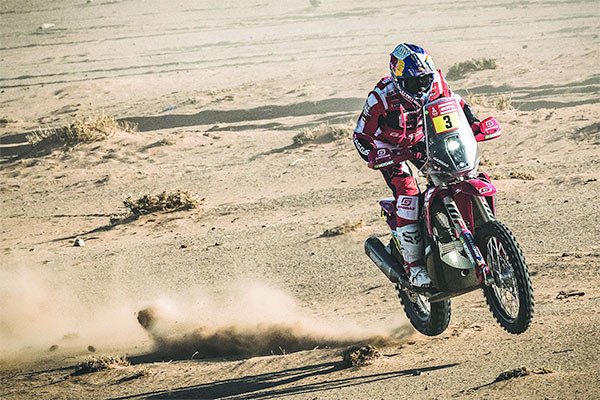 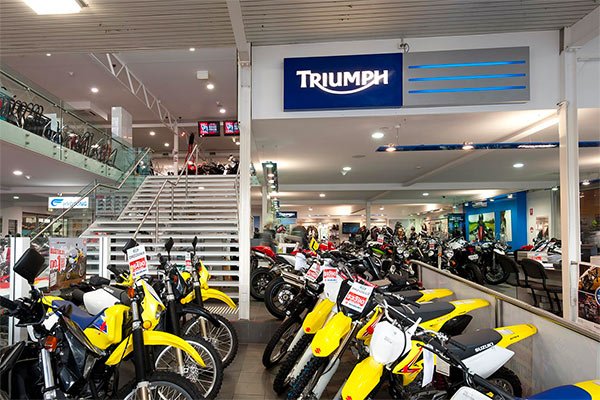 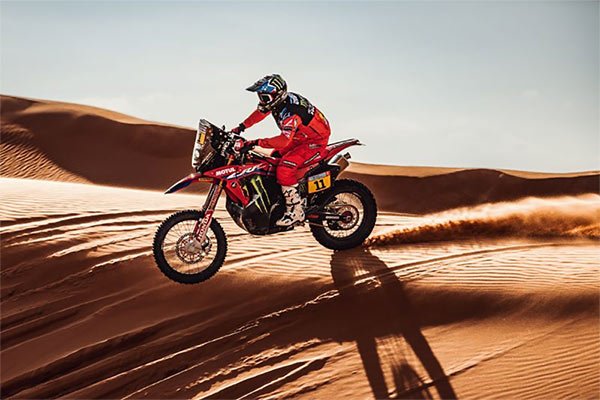