2021 Dakar Stage 5: Kevin Benavides takes the win and moves to the top of the rankings 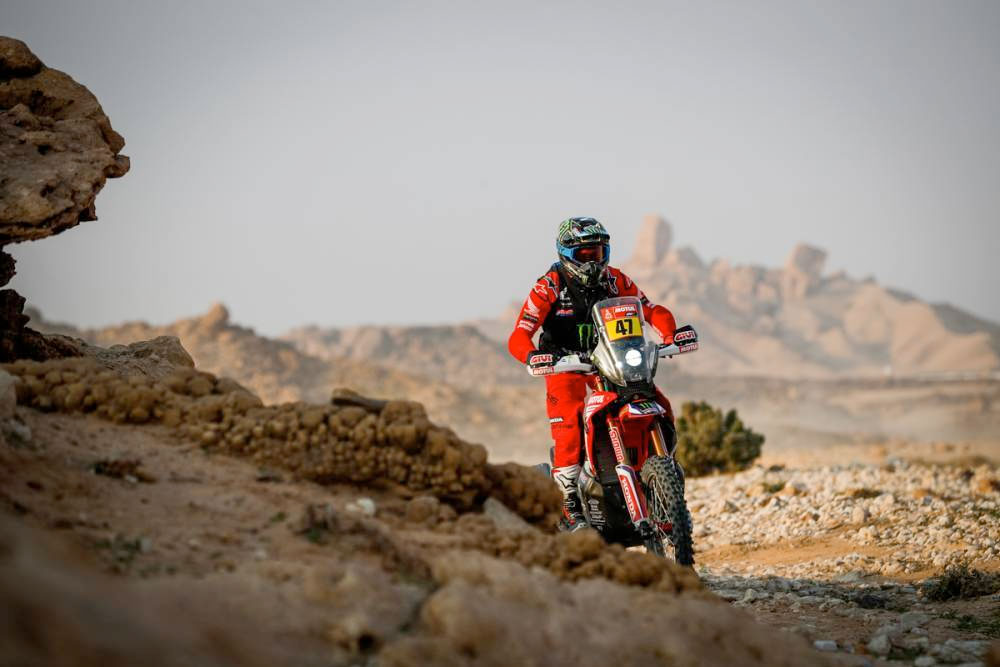 Kevin Benavides
Stage five of the 2021 Dakar Rally saw another one-two for Honda, with Kevin Benavides and Jose Cornejo occupying the top two places ahead of Australian Toby Price.

Leaving Riyadh behind, stage five of the rally delivered one of the physically toughest timed specials of the event so far. For 456km, riders raced against the clock over a variety of terrain, starting with rough, stony tracks in the early stages, before opening out into softer, undulating dunes on the drop down to Al Qaisumah.


The navigation once again proved demanding, particularly for the riders leading the peloton which opened the track, but also for adversaries attacking from more favorable positions behind. The special stage played out over hard, and sometimes rocky, terrain. Later there were stretches of sand and the final kilometres of the special stage even featured a few dunes.

Despite a hard fall Kevin Benavides took the stage victory spoils after a ferocious pedal-to-the-metal performance from start to finish. The Argentinean rider thus moves to the head of the overall standings with a 2‰Ûª31‰Û 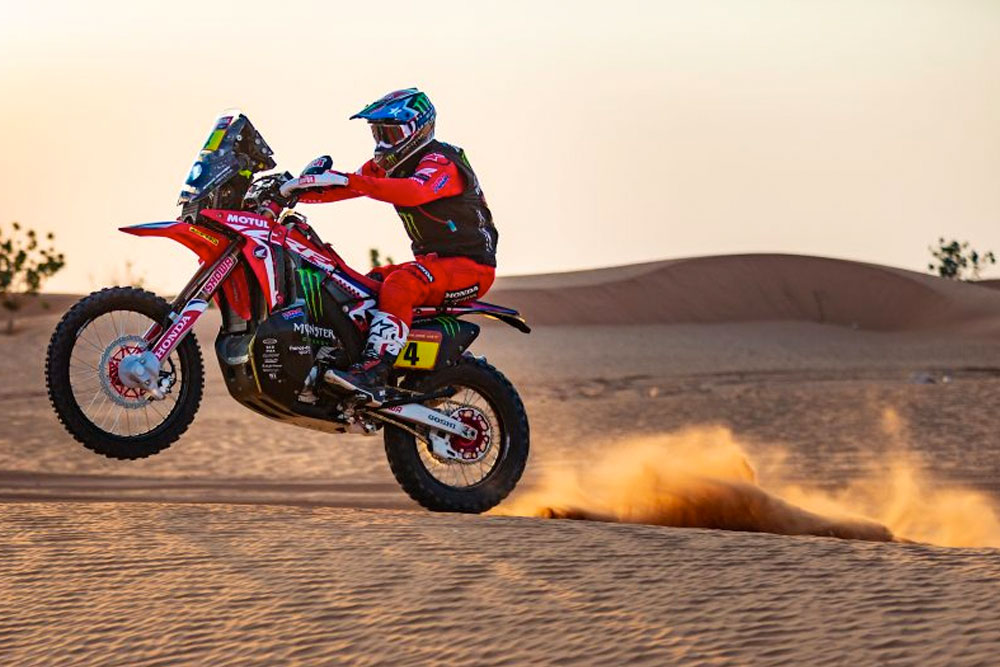 JosÌ© Ignacio Cornejo
JosÌ© Ignacio Cornejo, opened the stage for much of the 456-kilometre special, with several of his closest rivals in hot pursuit, he finished second on the day, precisely one minute behind his team-mate. Cornejo lies third place in the overall standings.

"This fifth stage was very long but also very tough," the Chilean said. "There was a bit of everything: rocks, trails and fast sections. At the start of the special there was a difficult area where many riders got lost, luckily, I was able to get passed it no problem which meant that I gained a lot of time. I caught up with the riders in front and I opened the track for 320km. I am very happy with the result. It was not what we had planned as a strategy, but I made the most of the opportunity. We hope to continue having solid stages and be in the fight for the top positions." 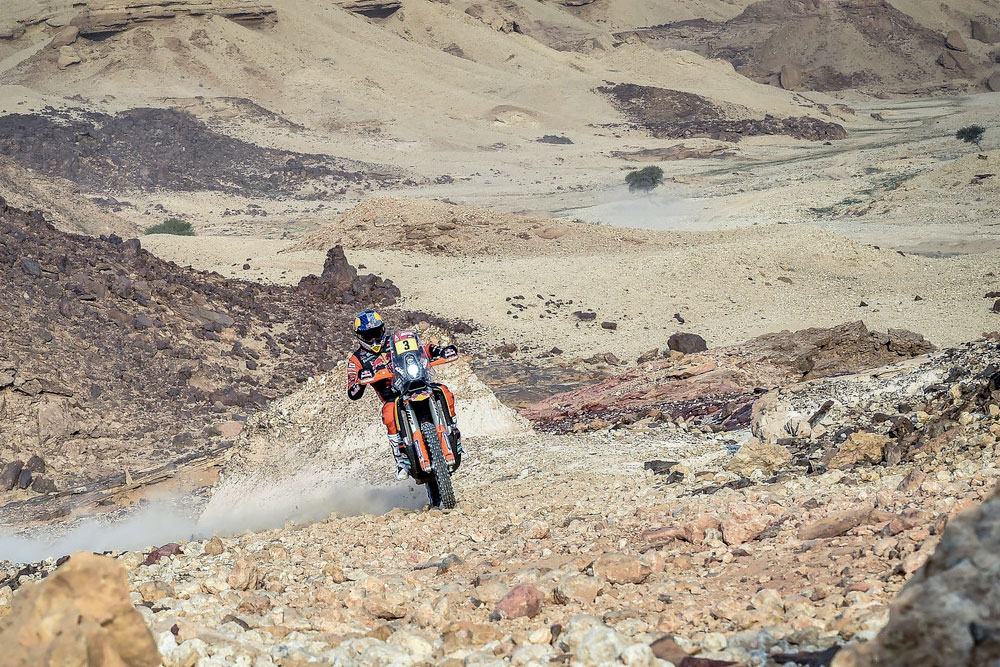 Toby Price
Another impressive performance by two-time Dakar winner Toby Price saw the Australian hunt down the riders opening the route. As the 16th competitor to take to the special, Price had to deal with both the extremely demanding navigation required to complete the first part of the stage, and a number of slower rivals ahead of him. Unfazed by the challenge, Price got his head down and placed inside the top 10 by the third checkpoint. Continuing to charge through the second half of the special, which consisted mostly of sandy tracks and dunes, He ultimately clocked in third, just over one-minute down on the eventual stage winner.

‰ÛÏQuite a difficult stage today ‰ÛÒ the first 200 kilometers involved some really technical navigation," Price explained. "We thought the first few stages were tricky, this one was another couple of levels worse. I made a few mistakes early on and the guys ahead got away a little bit, but overall I tried to manage the pace of the whole special and make sure I got through with no issues. That‰Ûªs day five done, day six is looking pretty tough too, but then it's on to the rest day.‰Û 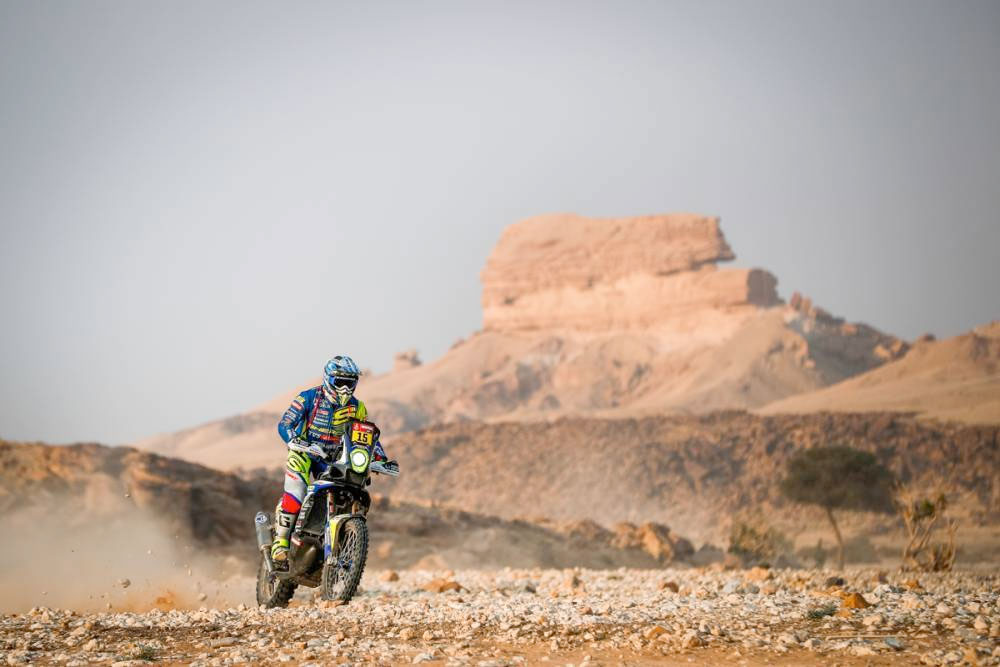 Daniel Sanders was the second rider to enter stage five. Despite making a couple of errors early on that cost him some time on the chasing pack, Sanders soon came into his own when the terrain switched to sand and soft dunes in the latter part of the special. The Australian Off-Road Champion, riding as part of the leading group, made the most of his desert racing experience and sustained an incredible pace to the finish to claim 15th for the day. 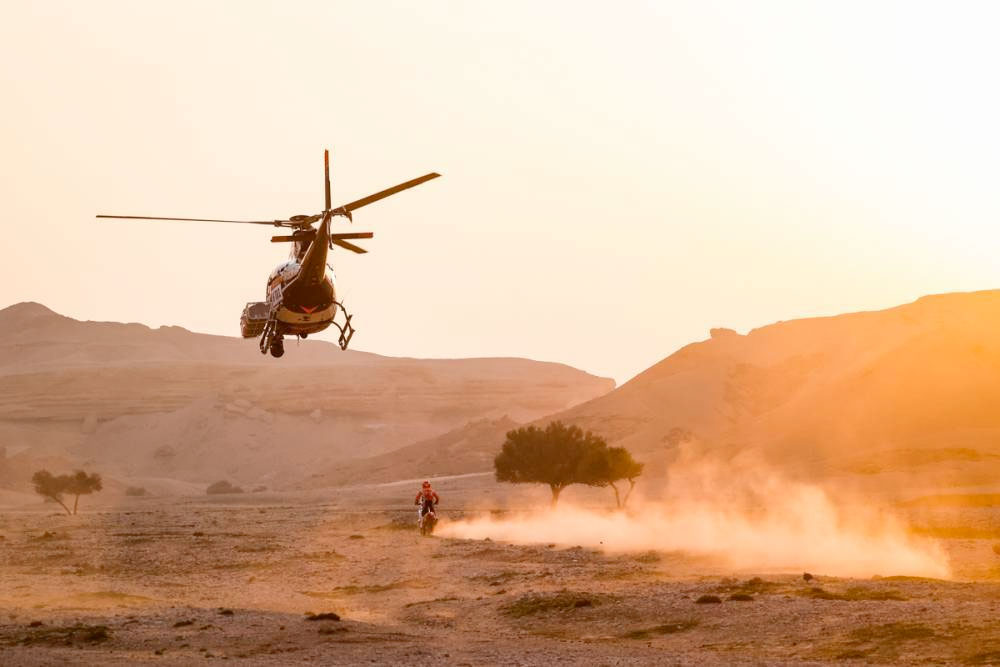 Daniel Sanders being escorted through the desert.
‰ÛÏI really enjoyed it today, even though it was really, really tiring by the end," Sanders said. "I lost a fair amount of time first thing, but then we hit the dunes and I just checked out a little bit and opened it up. It was great jumping off the top of the dunes, and I think I made up some time there too, so that helped. I knew the guys behind would be pushing hard too, so I just tried to keep a really strong pace. It was good fun but physical ‰ÛÒ I‰Ûªm glad to get to the end of a really tough day.‰Û 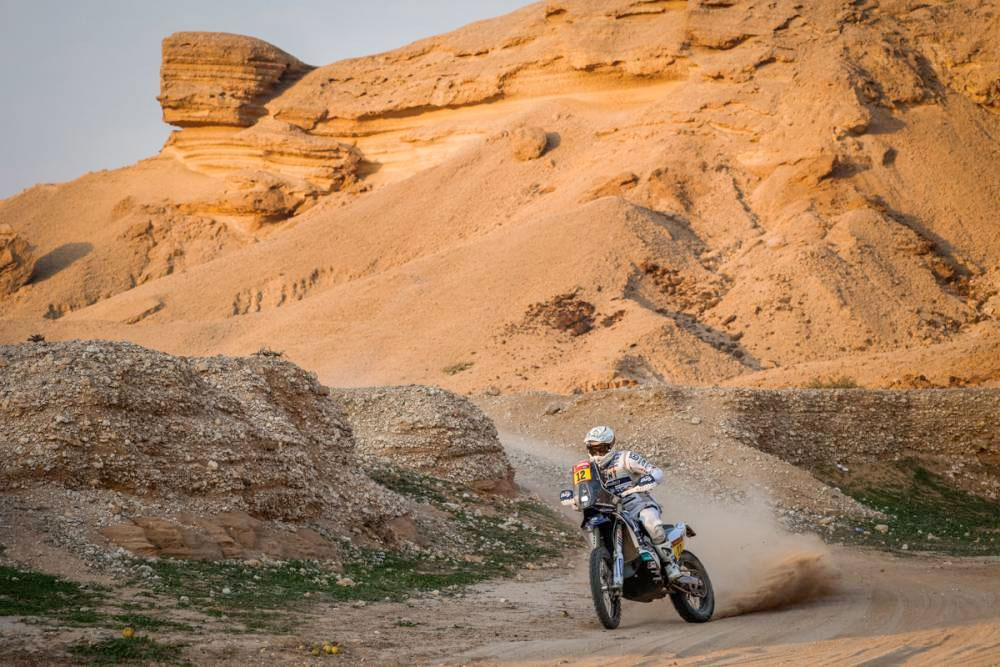 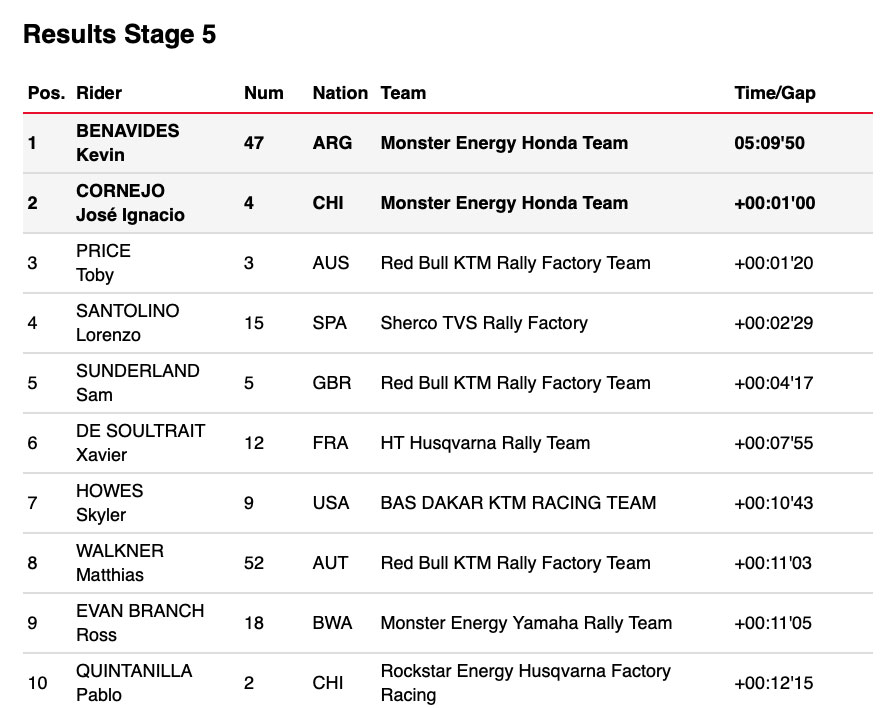 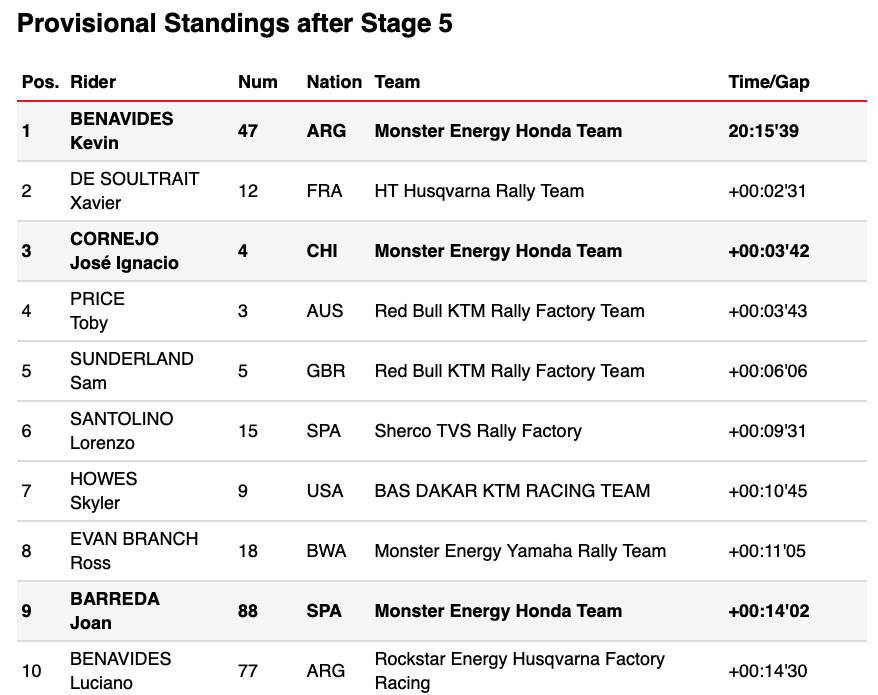