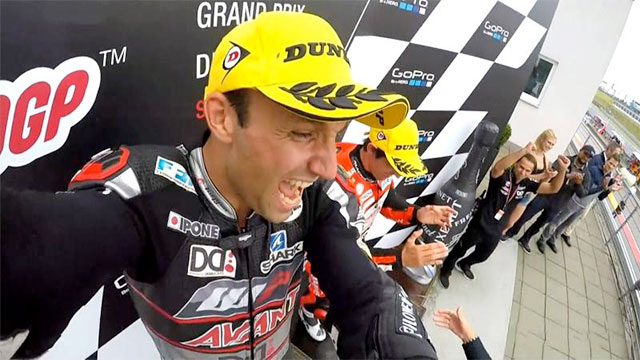 Conditions were as wet as ever as the Moto2 World Championship lined up on the grid of the Sachsenring in Germany for the ninth round of 2016.

The intermediate class had some of the worst weather on Friday, but the 20-minute Warm Up session was their first taste of a properly wet Sachsenring. Takaaki Nakagami (Idemitsu Honda Team Asia) was on pole for the first time in 2016, but in the wet conditions bravery would be the deciding factor of the day.

As the lights went out it was Johann Zarco (Ajo Motorsport) who grabbed the lead into and out of Turn 1. He was hotly pursued by Alex Rins (Paginas Amarillas HP 40) and Nakagami, the pair getting ahead not long after as Zarco faded early in the race. Several crashes ahead soon saw him back in podium contention and closing in on the leaders as he adjusted to the conditions.

Soon Zarco was one of five riders fighting for the win, taking no prisoners as he battled. He was on a charge to chase down Franco Morbidelli (Estrella Galicia 0,0 Marc VDS), but the Italian crashed out of the lead. Folger tried to pressure Zarco but the Frenchman kept his nerve in the final corner to taking a crucial victory.

Having briefly led his home Grand Prix early in the race, Jonas Folger (Dynavolt Intact GP) lost contact with the leading riders during the middle of the race. His hopes of a home podium looked over until the rain stopped, the track drying ever to slightly and allowing the German to push closer to the limit. Before long he was past Rins and up into second place. The German did all he could to take victory at home, sliding up the inside of Zarco at the final corner but was unable to get the drive to the line. Second place is Folger's first ever podium at home in Germany and by far his best result at the Sachsenring.

Rins looked comfortable in third place until he crashed out at Turn 1, promoting Julian Simon (QMMF Racing Team) to a surprise third position. This saw Simon return to the podium for the first time since the Valencia GP in 2012, despite nursing an injured ankle. The Spaniard was almost in tears as he was interviewed after the race, elated to return to the podium after such a long time since his last.

Lorenzo Baldassarri (Forward Team) had originally been declared unfit for the race after dislocating his right shoulder in Warm Up. The Italian elected to have his shoulder put back in and lined up on the grid. It was a tough race even in the wet, Baldassarri crossing the line in fifth thanks to a number of falls ahead.

Marcel Schrotter (AGR Team) was battling with Zarco for a top five finish, but the German‰Ûªs hopes of home glory came to an end at Turn 8 on lap five, lucky to walk away from the crash. Turn 8 would also claim Simone Corsi (Speed Up Racing) and Tom Luthi (Garage Plus Interwetten).

Championship front-runner Sam Lowes (Federal Oil Gresini Moto2) fell foul of the conditions at Turn 6, picking up his bike to try and salvage some points. The determined Brit did all he could, but would crash later in the race at Turn 1. Xavier Simeon (QMMF Racing Team) fell several laps later at the same corner.

Like Lowes, Nakagami remounted and was able to cross the line in 11th. Disaster continued to hit the front-runners as Morbidelli crashed at Turn 1 on lap 23, his chances of a first race win slipping through his fingers. A second fall towards the end of the race was the final nail in the coffin.

After a promising start, Alex Marquez (Estrella Galicia 0,0 Marc VDS) crashed from yet another race. Marquez remounted but would crash once more, this time at Turn 7. He was unharmed in both falls.

Ratthapark Wilairot (Idemitsu Honda Team Asia) jumped the start and was awarded a ride through penalty as a result.