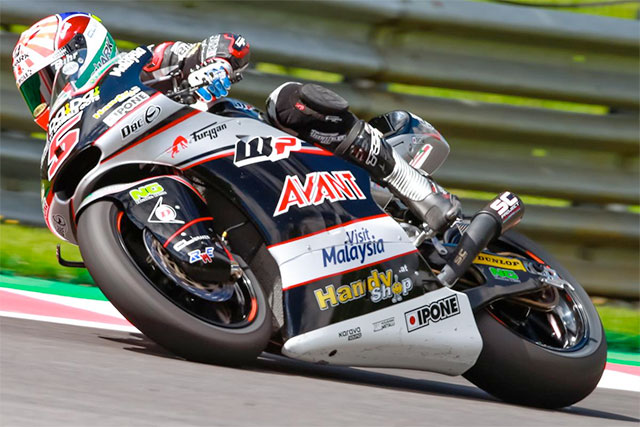 Johann Zarco (Ajo Motorsport) took the the Moto2 victory at the Red Bull Ring after the reigning Champion crowned a weekend of supremacy with a historic win, with Franco Morbidelli (Estrella Galicia 0,0 Marc VDS) back on the podium in second and the rostrum completed by a charging Alex Rins (Paginas Amarillas HP40).

It was an Estrella Galicia 0,0 Marc VDS 1-1 over the line at the end of Lap 1, as Morbidelli got the best start from second and Alex Marquez leapt up from a fifth grid spot to tail his teammate. After contact between Zarco and Marquez with an aggressive move from the reigning champion, the lead group became a 5-way battle with Morbidelli leading Schrotter, Luthi and Zarco. The points leader remained patient however and came through to the lead with nine laps to go, leaving the group to fight over who would complete the first podium at the Red Bull Ring.

Zarco played his hand perfectly after losing the lead into turn 1, as the Frenchman stayed patient and used his unique mixture of aggression and patience to make his way through. Pushing Alex Marquez wide as he began his assault, the Ajo Motorsport rider kept his focus throughout the fight for the lead, before breaking away with 9 laps to go and heading over the line to take another incredible victory ‰ÛÒ making him the most successful French rider in world championship history.

Second man Franco Morbidelli was the early leader of the race after a fantastic start, and the Italian rider fought hard to stay in contention as Zarco passed him and began to pull away. Taking second back from Luthi on the final lap, Morbidelli then put his head down and headed for the line to get back on the rostrum and convert his qualifying position into 20 well-earned points.

Alex Rins had a difficult qualifying and looked well out of podium contention for most of the early laps, before managing to find his way past Alex Marquez and setting off in pursuit of the front group. Zoning in on the front three as the last lap approached, Rins then took an incredible podium finish in the last corner, denying Swiss rival Tom Luthi the rostrum in the final few meters of the race.

There were impressive performances from Marcel Shrotter (AGR Team), who got his best result to date, and Alex Marquez. The German completed the top 5 after keeping Rins honest for a lot of the race and then enjoyed a front row seat for the last corner clash between the Spaniard and Swiss rival Luthi, and Alex Marquez converted his best ever qualifying in Moto2 into a sixth finish after fighting at the front. The 2014 Moto3 world champion has come back from the summer break reloaded, relaxed and ready to recover the form that saw him take his place in history in the lower category ‰ÛÒ including a nostalgic battle with former Moto3 teammate Alex Rins in Austria.

It was a bad day at the office for Championship hopeful Sam Lowes (Federal Oil Gresini Moto2) as the British rider crashed out of contention, opening the door for Zarco and Rins to gain a big margin over him in the points ‰ÛÒ after remounting, the Brit then suffered another crash at the same corner after his handlebar broke.

Moto2 will be back on track at Brno next weekend, for another thrilling battle as Zarco lays down the challenge.