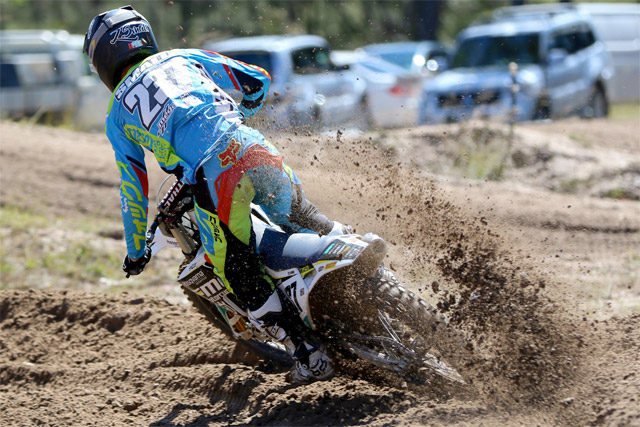 Husqvarna Factory Support racer Zak Small has added the Queensland Motocross Championship to his list of achievements for 2016 after wrapping up the premier class of the series at its final round at Hervey Bay last weekend.

The Bundaberg ace was clearly the fastest man on the track on the weekend, and used 2, 1, 1 scores to power his Mega Motorcycles-backed Husqvarna FC 350 to victory in the premier MX1 category ahead of Luke Weaver and Brad Polsoni.

This clinched the championship by 10 points over Weaver with Polsoni finishing third.

Small also moved from sixth to third in the Lites championship, finishing equal second on points on the day behind Richie Evans.

It‰Ûªs been an impressive 6 weeks for Small, who won the premier class of the Sunshine State series in the middle of August, then finished 2-6 for fourth overall on his Husqvarna FC250 as the MXD class of the MX Nationals concluded at Coolum a week ago.

‰ÛÏI had a pretty good weekend although I made it pretty tough on myself with a few first lap crashes in almost every race." Small said. "On the Saturday I crashed off the start, and winning that would have taken the pressure off my shoulders.

"I had to come from dead last back to second, I was three or four seconds a lap quicker than anyone else out there. Then I won the last two races and wrapped it up. I felt really good on the bike at Hervey Bay and got from sixth back up into third in the Lites as well. Nato wasn‰Ûªt there, which helped a little bit too! I ended up tied for second but I lost it on a count back thanks to a crash in that last one.

"I don't think it's actually sunk in yet, I was definitely happy to cross that line the final time. It's been six years since I've won a Queensland title, and that was on the yellow plate 65, so this feels good.

"In the sand, the track was super rough. But I rode the best in the last race when it was the gnarliest.

"My 350 was unreal, Paul from MPE had my suspension working so well and I felt awesome all weekend on it. I can‰Ûªt wait to get a ‰Ûª17 and get back on the gas. I‰Ûªm really keen to step up from MXD to MX1 - I‰Ûªd love to consistently be the first privateer home next year.‰Û