Zak Mitten storms back to take Round 6 glory at AORC 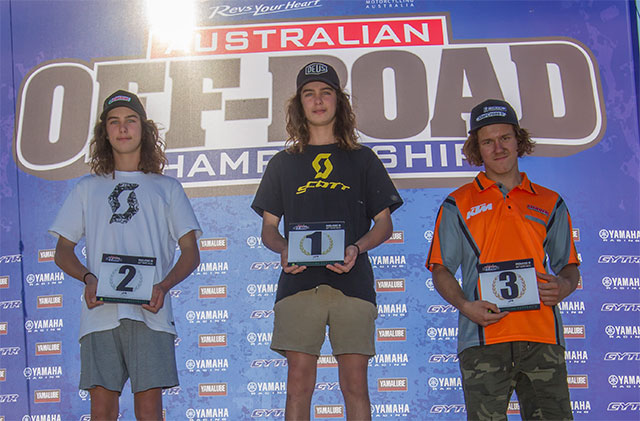 As the half way point of the 2016 Yamaha Australian Off-Road championship was marked today it was the Juniors who had a tough battle ahead of them to put valuable championship points on the board and manoeuvre around the tight Murray Bridge track for Round 6.

With Rick Ireland taking the Round 5 win at his debut in the Yamaha AORC yesterday ahead of Zak Mitten (1:09:54.985), Mitten had something to prove in order to put himself back on the top spot today. The dust, dirt and a change of track brought out the best in young Mitten who was victorious today, taking the J4 win and finishing the day with the fastest junior time.

No one could reach Mitten‰Ûªs pace today, not even his brother Tom (1:11:48.078) who finished second in the J4 class followed close behind by 16-year-old Rick Ireland, making his mark in the sport yet again with an outstanding finishing time of 1:11:51.141.

Explaining the conditions out on track today, Zak Mitten with a smile on his face, was happy with his result and is preparing for more consistent rounds on the top step of the podium.

‰ÛÏThe bike was feeling so much better today so I am feeling really good about my win,‰Û